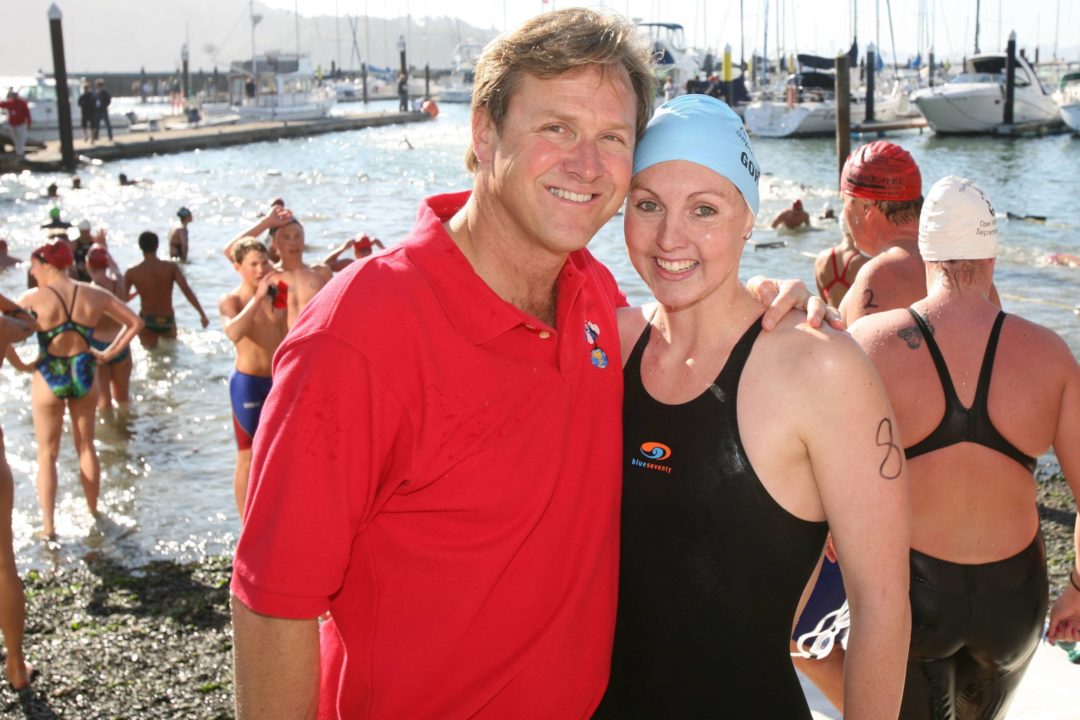 This weekend, SwimSwam will be livestreaming the 2012 RCP Tiburon Sprint Classic and RCP Tiburon Mile, live from California.

The competition will kick off with the sprints on Saturday afternoon, where at 2:45 Pacific Time, event host John Naber and organizer Bob Palacak will draw the names for the heats. The first round of the Battle of the Sexes challenge dives in at 3:10, where 6 women will vie for the chance to face off against Rowdy Gaines in the final.

To watch the live stream, and for full coverage, check out the official event channel.

Next up, there will be a Legends Rematch race between two historic male sprinters of yesteryear (we’ll reveal who shortly) at 4PM. Just after that, the men’s heats will begin, with the two fastest swimmers going to the head-to-head final.

The finals of both the Battle of the Sexes and the men’s Sprint Classic Championship will begina round 4:30, after which there will be a 200 free relay that will pick two sprint males, one female, and one legend head-to-head in an all-out showdown.

The next morning, the race will begin at Ayala Cove, with the finish due at the Corinthian Yacht Club Beach. The first swimmers go off at 9AM Pacific Time. The elite group will go off first, followed by the age group and wet suit divisions. SwimSwam’s open water producer and commentator Mike Lewis will call that race live and on-air.

The winners of the men’s and women’s open water races will receive $10,000 grand prizes, which has attracted some of the best swimmers from around the world – Melissa Gorman, Thomas Lurz, Ous Mellouli, Emily Brunemann, Michael Klueh, Christine Jennings, Kane Radford).

Speaking of Battle of the Sexes, one of the best moments in Tiburon history came in 5th place in this race in 2001 regardless of gender. That included knocking off the defending men’s 10km World Champion Evgeni Bezruchenko from Russia, who will be competing again this year.

A prelude to this year’s  RCP Tiburon Mile will be The RCP Tiburon Sprint Classic II – “the fastest swim meet in history” – featuring USA Olympic Gold Medallist Ricky Berens, 2012 NCAA 50-Free Champion Jimmy Feigan, French Silver Medalist Fred Bousquet, 2010 RCP Tiburon Sprint Classic Champion Josh Schneider. These athletes will compete for a $10,000 1st prize in a 50 Free Sprint Exhibition in a private pool at an exclusive Tiburon residence. This is an up close and personal experience with live interviews before and after each heat culminating in a final two-man match race! The famed Tiburon sprint, in the Tiburon sprint tank, is a made-for-tv pool. It has only two lanes, ensuring that organizers can’t get away from the head-to-head, gut-check battles that drive fans crazy.