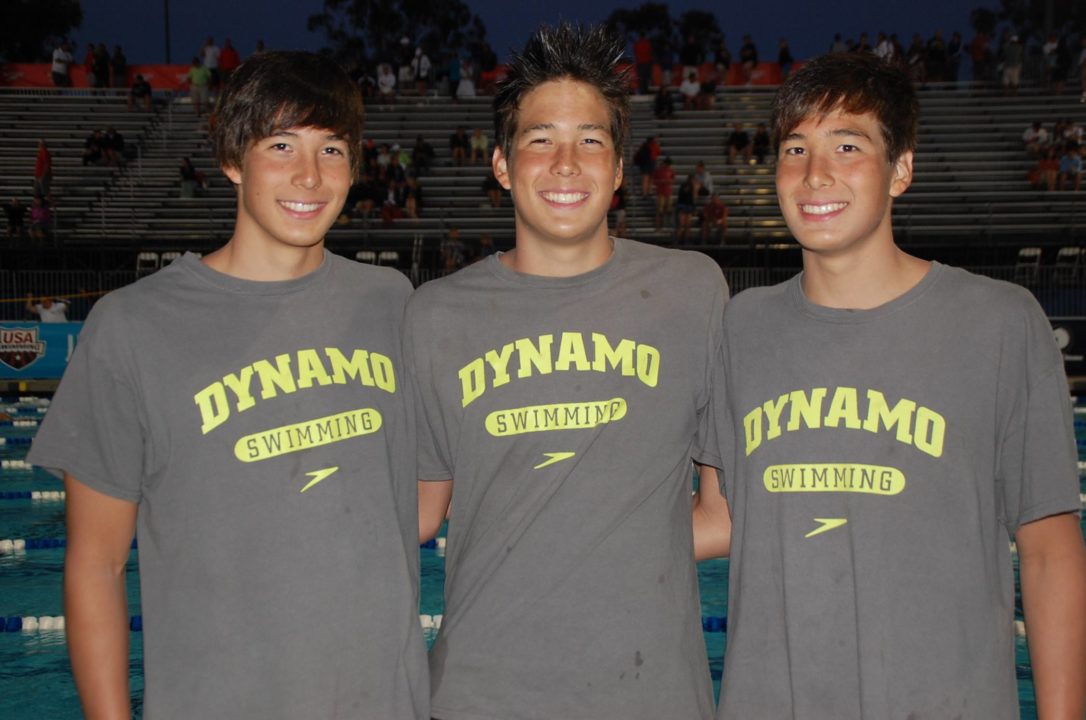 The Georgia-bound Litherland triplets had a big weekend in their final high school meet at the GHSA 6A State Swimming and Diving Championships. Current photo via Anne Lepesant

Although Walton High School ultimately edged Chattahoochee High School in a tight team competition on the boys side, the big story on the afternoon at the 2014 GHSA 6A State Swimming and Diving Championships was the performance of three Chattahoochee athletes.

Kevin, Jay, and Mick Litherland, who will all be competing at the University of Georgia beginning in the fall, found themselves on the top spot of the podium frequently throughout their final high school competition, winning a combined seven of eleven swimming events and setting three state records.  In total, the Litherland triplets, known best for their breakout performances as a part of Dynamo Swim Club this past summer, accounted for 197 of Chattahoochee’s 218 total points.  Despite their efforts, Chattahoochee fell just short of Walton in the final team standings, 224.5 to 218.  Notably, Walton won the meet without coming first in a single event, or ever having more than one swimmer in an A-final.

On the girls’ side of the meet, a critical win in the 200 freestyle relay gave Lambert High School a lead they wouldn’t relinquish, ultimately taking the girls competition by 30+ points.

On a quick turnaround, Kevin came back to take the next event, winning the 200 freestyle handily in 1:37.36, nearly two seconds ahead of Cody Bekemeyer (1:39.24) of Collins Hill, and well under his previous best time of 1:39.50.   Bekemeyer would come back later in the meet to give Kevin a formidable challenge in the 500 free, matching him through 400 yards before Litherland pulled away for the win in 4:22.91.  Bekemeyer touched second in 4:24.37.

Off of his brother’s win in the 200 free, Mick looked to keep the momentum going in the 200 IM, but finished just behind Alex Taylor of Brookwood for second.  After falling behind in the opening 50, Taylor turned in the fastest middle 100 to take the lead and held off the field over the final 50 to touch in a final time of 1:48.50.  Mick would rebound to come back later to win the 100 butterfly in 49.40, the only swimmer to break 50 seconds.

After a long layoff following his win as a part of the 200 medley relay, Jay Litherland showed off his durability and versatility by closing the meet with back-to-back wins in the 100 back and 100 breast, setting a state record in the breaststroke.  Jay ran away with the 100 back, clocking a 48.38, before turning around to break the state record in the 1o0 breast, touching in 55.84.

Although there were no meet records set, the girls meet featured plenty of fast swimming and a great team competition between Johns Creek High School and Lambert High School.

Like the winners on the boys side, Lambert didn’t win a single individual event, but were victorious with overall team depth.  However, behind Megan Bestor and Katherine Aikins, Lambert came away with titles in the 200 medley and 200 freestyle relays.  Bestor (backstroke) and Aikins (freestyle) combined with junior Ashley Mallon (breaststroke) and freshman Jane Johnson (butterfly) to win the opening relay in 1:44.53, the second fastest time in Georgia state meet history.

Later, with Johns Creek holding a nine point lead heading into the second relay, Bestor (23.91 leadoff) and Aikins (23.14 anchor) were joined by Emma Fish (24.49) and Aubrey Jones (24.37) to take the 200 freestyle relay in 1:35.91.  The finish turned out to be a tide-turning 18-point swing, with Johns Creek finishing a distant eighth in that event.  In the following event, Bestor would finish second in the 100 backstroke in 55.22 (just 0.01 behind Megan Young of Etowah) to ultimately put Johns Creek away.

While Lambert was ultimately victorious thanks to a well-rounded team effort, the difference maker was Aikins.  The sophomore sprinter dropped the fastest anchor leg in the field in both the opening and 400 freestyle relays (23.06 and 50.36), swam on all three Lambert relays, and also finished second in the individual 50 free, with a final time of 23.29.  The winner of that event was Florida State-bound senior Alexi Smith of Archer High School, who, with her final time of 22.83, added her name to the short list of Georgia girls who have cracked the 23-second barrier.

Outside of the team competition, the most notable swims of the team competition came from future UCLA Bruin Katie Grover of Milton High School, who dominated the field in the 100 butterfly en route to a 52.90 victory, a lifetime best by over a half second.  Although she had to settle for third later in the meet in the 100 backstroke, Grover closed out the meet with a statement, leading off the 400 freestyle relay in 49.90, more than a second faster than the winner of the individual 100 freestyle.

If they were only quadruplets! amazing!

Even more impressive was Jay’s 45.4 split on the 400 Free Relay, which also broke a state record. Additionally, his winning time in the 100 back would have broken the state record, had it not been lowered earlier in the day by a Dalton swimmer. That would have been 3 state records in the span of about 20 minutes.

Great kids! And their best events are the longer ones, like 4im, 2fly, 2back, mile, etc. Good genes eh?