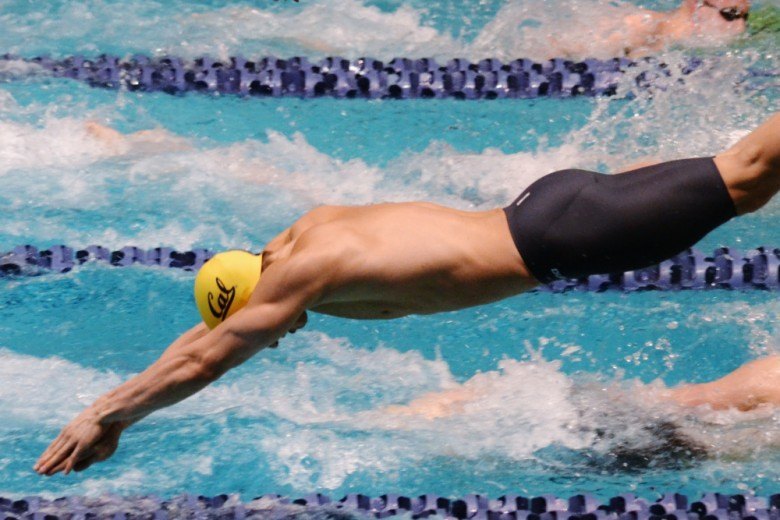 It's what we do. We Race. (Photo courtesy: Lindy Shields)

Lindy Shields is a former competitive swimmer from California, who swam for two years at Biola University and will be attending graduate school at Auburn in the fall. She works, but in her free time likes to muse in her own blog, and we convinced her it would be a good idea to share her thoughts on swimming. She also happens to be the sister of All-American swimmer Tom Shields, but that’s purely coincidental.

My cousin looked at me with a challenging eye and a gleaming smile as we tread water next to the boat.  We spent the weekend just off the shore of Catalina Island, four people on a sailboat moored to a buoy.  Equipped with a few kayaks, Stand-Up-Paddle boards, snorkels, fins, and goggles, we were prepared for a weekend filled with sun and saltwater.

“Sure” I replied and quickly glanced around.  I spotted a buoy no more than 50 yards away.  “Around the buoy and back?”

We each grabbed hold of a rope on the boat to hoist our feet up against the hull.

And we were off.  As we rounded the buoy I tackled my 13-yr-old cousin and pulled her feet, lunging myself forward as I began swimming back to the boat.  She screamed, laughed, and returned the gesture.  We continued to climb over each other until the last 10 yards, when finally we both put our heads down and sprinted.  I barely out-touched her.

With a gasp for air and a chuckle she splashed me, “Nice race, Cheater.”

Three simple words, yet to us three formative ones.  We the “Swim People” have heard and uttered these words countless times.  An eight-year-old boy says them to his grandfather while playing in the pool on a hot summer day.  Two teenagers challenge each other to a swim across the river.  A family races to the dock during their vacation on the lake.

Three words, three syllables, ten letters: a challenge of raw speed, an acknowledgement of another’s potential to be faster, and above anything, a desire to win.  It’s addicting.  Just ask the University of Michigan men or University of Georgia women.  Ask Nathan Adrian, Katinka Hosszu, or Missy Franklin.  Ask Michael Phelps.

The words might not be said out loud, but every time the Big Shots step behind the blocks at the Olympic games there is a psychological and physical utterance of these three words.  There must be, otherwise none of this works.  This whole sport exists because someone once said to another:

When I was sixteen I was on an exchange team that went to Fiji.  My friend and I met some native children who challenged us to race across the channel that separated our resort from the rest of the island.  They spoke very little English and were probably no older than ten, but we agreed to race.  It ended up being one of the highlights of my trip as it showed me the camaraderie that could be found between people groups who actually have very little in common.  Our mutual love for water and playful competition transcended any barrier that existed— language or otherwise.  It was unforgettable.

This inability to forget, this “unforgettableness” is why the swimming community is what it is today.  Everyone always comes back.  We race our little cousins, our sisters, our nieces and nephews.  We race our grandparents and our coaches, our peers and our opponents.  From child’s play to elite competition, we’re captivated.  As alumni, coaches, former Olympians, or simply former swimmers, we will always be swim fans.  We will always be swimmers.

Some people see the world through rose-colored glasses and tell it “I love you.”  Others see it with blinders and say “You scare me.”

We the Swim People, however, see the world a little differently: through water-filled goggles and three simple words.

This is SO TRUE and well written…way to go Lindy! Go Bears and WDE!

Absolutely love it – great thoughts. Just this morning at my masters workout, my lane partner said “hey, give me a 20 second head start on this 400 and we’ll race”. It was on…

Great article Lindy!! Growing up being one of the Shields Swim People, (why do I feel like I should be a character in Avatar), I quickly figured out that there was no way this Shields was going to beat any of the other Shields in swimming. So I combined my gymnastics and swimming skills to become a diver. Then the saying always was, “I’ll try it if you try it.” Later on in life now the question is, “Yes, but can you dive off of it.” Now that my son, Drew, is a swim coach I can proudly exclaim, “And the beat goes on.” Fishes till to the end! Fishes, (Swim People) rule!!