Amy Van Dyken is an Olympic icon, the most decorated athlete, male or female, of the 1996 Olympic Games in...

Amy Van Dyken is an Olympic icon, the most decorated athlete, male or female, of the 1996 Olympic Games in Atlanta, Georgia, and the first American woman to ever claim four gold medals in a single Olympics. Amy went on to win two more gold medals at the 2000 Olympic Games in Sydney, finishing her career with a total of six golds.

While Michael Phelps and Ryan Lochte netted reality shows immediately following the 2012 Olympic Games in London, Amy came from a different era, one where Olympians had to work their way into the media industry. 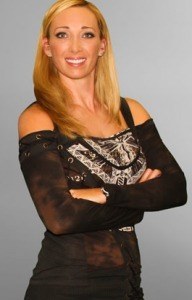 Amy’s career has been winding and twisting, with sideline reporting gigs for the Seattle Seahawks and the Denver Broncos, lots of speaking engagements, even more charitable work with the Make-A-Wish Foundation, and a very respectable stage-debut on the award-winning Vagina Monologues. Amy found her niche, however, in radio. She’s paid her dues as a morning drive-time host on 98.7 The Peck in Phoenix, Arizona, and loved it. This is no easy gig. It’s fun, but it’s hard work, a grind getting up in the wee hours of the morning to be bright, sunny and happy for the hundreds of thousands of listeners starting their workday. I asked Amy about this a few years back, and she said:

“Oh , come on? I swam! Getting up to swim every morning at the crack of dawn is far easier than doing drive-time radio… It’s not alway easy being happy every single morning, because that is the job, but once you get in the booth and get going, it works.”

Amy sadly left the show in 2011 to attend to family matters, but she returned to radio in 2012 on Fox Sports Tonight with Ron Dibble,  former Cincinnati Reds pitcher and two-time MLB All Star. According to Jim Williams from The Examiner:

“There are many smart women out there who can hold their own in the world of sports talk radio if networks would give them a chance. Case in point: Amy Van Dyken of Fox Sports Radio.”

While Amy blazes a path in Sports Radio, she has stayed in-touch with her swimming roots. She attending the 2012 U.S. Olympic Swimming Trials as a special guest and VIP, presenting awards and offering her support to our sports’ new crop of stars.

You can tuned into Fox Sports Radio weeknights 7-10pm PT on Sirius XM channel 169, or at FoxSportsRadio.com or via a free app for your smartphone or tablet.

Never really liked her during her swimming days, i.e. the whole spitting thing. However, it’s been so long, and I am happy there are talented women in sports radio.

It would be interesting to get here take on steroids in sports if this comes up on the show.

is Michelle Smith considered an Atlanta Olympics icon now too?

Whoa! Is there really that much speculation with Amy? I remember the remarks about Inge, but didn’t know anything about Amy.