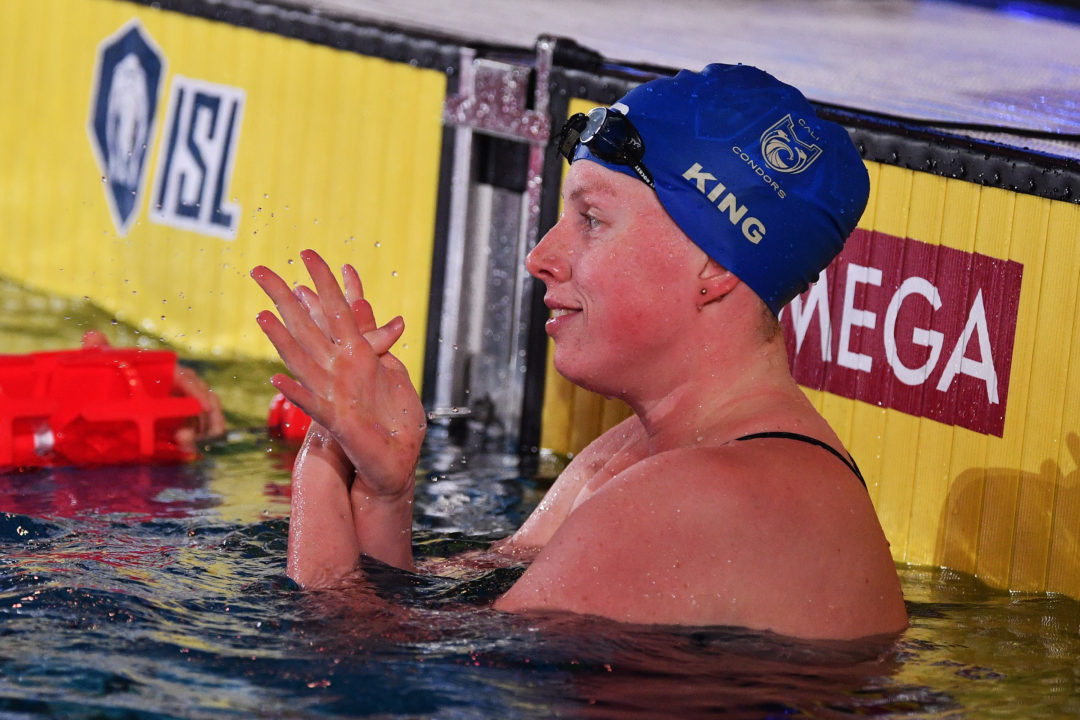 Lilly King of the Cali Condors (above) has broken the U.S. Open Record in the 100 breaststroke in short course meters on Sunday at the ISL meet in Maryland. Current photo via Alfredo Falcone/La Presse

King swam a 1:03.00 in Sunday to win by a second-and-a-half ahead of the LA Current’s Annie Lazor.

That time breaks the old record of 1:03.19 that was set by Russian swimmer Yulia Efimova at the 2015 Duel in the Pool. While the two have downplayed the rivalry since, King and Efimova have been painted as arch-opponents after King wagged her finger in the direction of Efimova at the 2016 Olympics in a rebuttal to a doping violation for Efimova. Efimova has twice been cited for anti-doping rules violations, though one of those was waived as a result of some chemical ambiguity regarding a newly-banned substance meldonium in 2016.

King’s previous best time was a 1:03.35 done at the 2016 World Short Course Championships. Her fastest time in this ISL season was a 1:04.21 in Naples. She hasn’t yet lost an individual event in the 2019 ISL season. With Efimova ineligible for ISL competition thanks to her doping violation, that streak for King will probably survive until the end of the season.

U.S. Open Records represent the fastest times done on American soil by a swimmer of any nationality.

Congratulations Lilly & all athletes this weekend. Also, having come up in yards decades ago ( not many SCM pools around, let alone SCM meets by comparison to other countries), it is wonderful for American athletes to finally have opportunities to break SCM records on a regular basis. I remember watching in March 2004 when Ian Crocker went 46.25 for the (then) World Record 100 free SCM at NCAA’s. Caught my attention due to lack of SCM events. That year the meet was held SCM due to Athens Olympics. https://www.swimmingworldmagazine.com/news/flash-ian-crocker-obliterates-popovs-100m-free-world-record/ Greatly looking forward to more records (world, US Open & national – all countries) being broken by shaved & tapered athletes in Vegas in a month! ISL is a hit!

she did not loose many races this year …..red hot