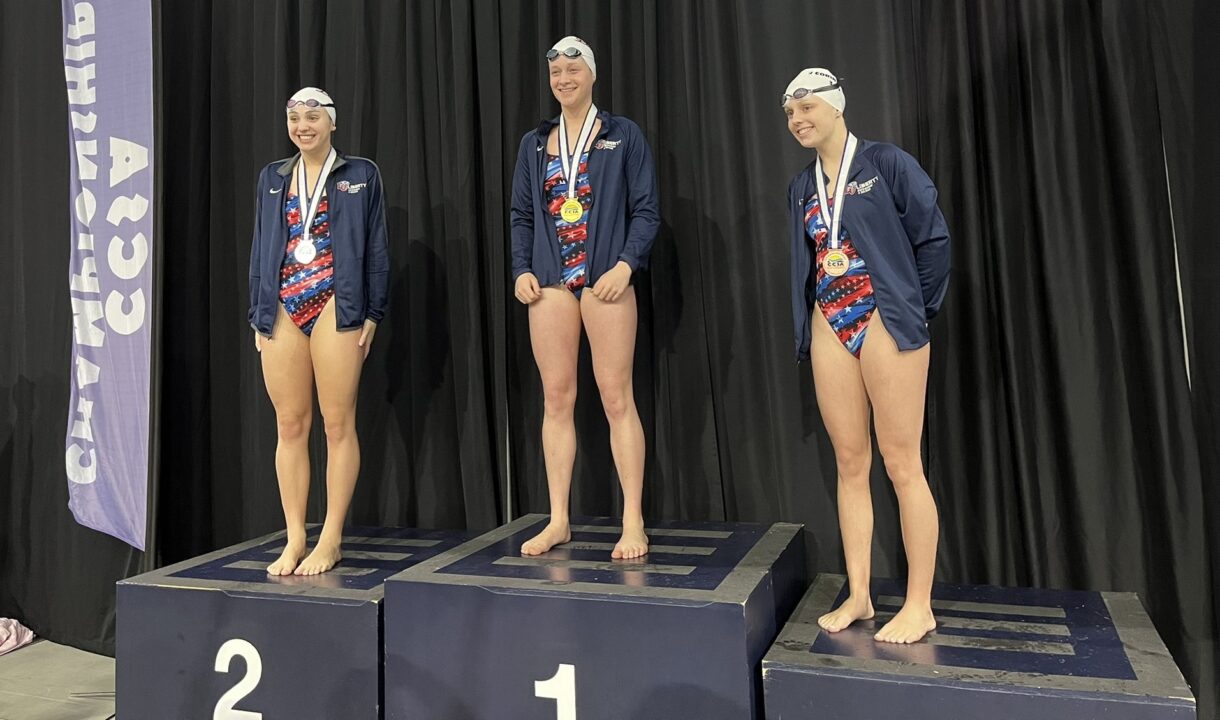 The Liberty women more-than-doubled their lead on day 2 of the 2022 CCSA Swimming & Diving Championships, while the Incarnate Word men extended their lead over Florida Atlantic.

The Florida Gulf Coast women picked up three more victories on Thursday at the CCSA Championships, including keeping a perfect relay record in tact, but more middle-distance dominance for the Liberty Flames carried the day, extending their lead by more than 100 points on Thursday alone.

The best split of the race came from FGCU anchor Hailey Jerew in 22.20, followed by UNCA junior Delaney Carlton in 22.23.

FGCU moved to two-for-two when junior Tori Czarnecka won the 100 fly in 53.34, more than a second ahead of Liberty freshman Sydney Stricklin (54.49).

Czarnecka swam a big best time in the 50 free on Wednesday, where she also won, but was .16 short of her season-best in the 100 fly on Thursday.

As for Stricklin, she knocked a second-and-a-half off her season best time, moving up 7 spots from her seed. The Flames moved up all night long, and that’s what led to their big lead.

Jumps like that are why Liberty is on its way to winning this meet, in spite of being seeded well behind their 2021 co-champions FGCU. No team has ever gone 1-2-3-4 in the 400 IM at the CCSA Championships before.

The defending 400 IM champion Ximena Conde from Incarnate Word was 6th here. That’s a better outcome than in Wednesday’s 500 free, where she was also the defending champion but finished 10th.

Liberty has racked up big points in the middle-distance races: they went 1-3-4 in the 500 free too.

FFCU fought back to win the 400 medley relay by more than three seconds in 3:38.37. While the Eagles have swept the relays so far, with only one slot per team available, relays have a limited ability to shift meets.

FGCU had the fastest split on all but the leadoff leg of that 400 medley relay, including Czarnecka splitting 52.61 on the fly leg.

Three of the five men’s teams picked up wins on Thursday, but Incarnate Word picked up the most wins to extend their lead at the meet’s halfway point.

Incarnate Word won four of the day’s six events. That included the men’s 3-meter diving title by sophomore Kaivon Dixon. Only Incarnate Word and FAU brought divers to the event. Dixon hit an NCAA Zone Qualifying Standard in his win.

The Cardinals’ three swimming wins came in the last three events of the session. That began with a 3:53.05 from freshman Panos Vlachogia in the men’s 400 IM. The top three finishers in that race were all freshmen – followed by FAU’s Nick Shaffer (3:54.39) and Incarnate Word’s Jorge Cardenas (3:56.85).

Another Incarnate Word freshman, Fabio Fasolo won the 200 free in the next race, touching in 1:38.43. Fasolo entered Wednesday’s 50 free as the top seed, but missed his best time to finish in a tie for 5th place.

But this 200 free was a personal best and good enough for the win.

This was another freshman-heavy race, with five of the top six (and seven of the top nine) being rookies. The top five finishers were all better than the 1:39.9 that won this race at last year’s championship meet (where Incarnate Word was stuck home in Texas during a winter storm).

Incarnate Word is on their way to the WAC next season where they’ll face the likes of Grand Canyon, Air Force, and UNLV, all regular NCAA Championship participants, and they’ll take a very young team with them to their new conference.

The other winners on the day were Gardner-Webb and FAU.

The fastest split of the field belonged to Noah Wilkins, who anchored fourth-place Old Dominion in a split of 19.50. He was the runner-up in the individual race on Wednesday in 20.24 on a flat-start.

Florida Atlantic junior Rateb Hussein won the day’s other event, the 100 fly, in 47.07. That is FAU’s first-ever CCSA title in the 100 fly since joining the conference in 2015.

Abby Strohmeier has come a long way since writing this : https://swimswam.com/the-view-from-behind-the-basket-aka-the-best-birthday-present-ever/