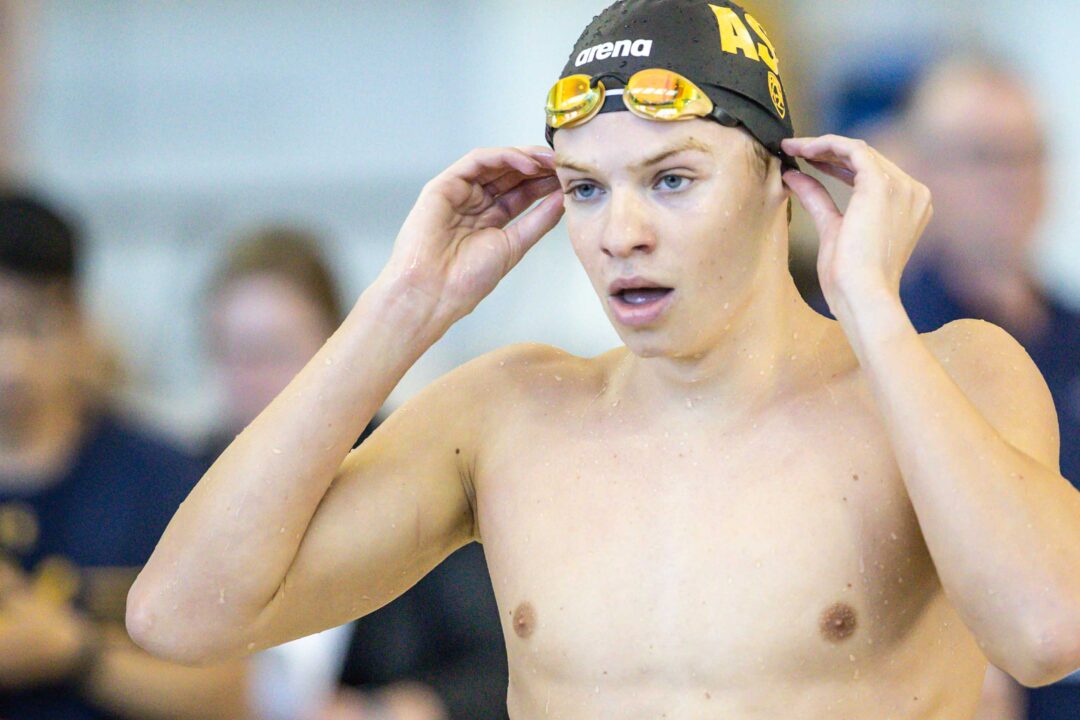 After an electric long course season becoming a two-time world champion and throwing down the second fastest 400 meter IM in history, Léon Marchand wasted no time getting after it in his NCAA sophomore season debut at ASU.

Marchand won the men’s edition of ASU’s SunDevil Challenge pentathlon, which featured a 100 of each stroke and finished with a 100 IM. Marchand cemented his win with a blistering 46.63 100 yard IM, which is unofficially the second fastest time in history.

Watch the full race below:

The only man who’s been faster is Shaine Casas, who clocked 46.33 at a Texas A&M meet in December 2020. Casas recently made headlines for dominating the Texas men’s quadrathlon and scoring the highest point total in school history.

Perhaps the most impressive part of Marchand’s time is that it came at the end of the meet, after he had already swum four events. ASU associate head coach Herbie Behm said on Twitter that the meet only took an hour and 15 minutes, so Marchand fired this swim off on little rest.

*verifying times for an unofficial event is difficult, so if you know of a swim we missed, please let us know in the comments.

Past the 11-12 age group level, the 100 IM is not a common race in the U.S., and is not an NCAA Championship event. The highest profile championship meet that usually offers the 100 yard IM is the NCSA Junior National Championships, though it is raced at SCM World Championships.

It’s worth mentioning that a 16-year old swam a time that was right up there with the best in history, except that he went a little too far on one of his underwaters.

Is the 100 IM the best event in swimming?

Dressel will destroy everyone in the 100 IM. He can swim 44 low in yards easily.

There is NO DOUBT Dressel is the GOAT in terms of rested Short Course PBs of the 100s. I wonder how he could do, even if in the same fully prepped condition where he performed any of his PBs, with all 5 in 75 minutes like Marchand, rather than across the days/weeks/months/years in which Dressel accumulated his scintilatting times.. It woulld be fun to watch! I don’t know anything about whether anyone/everyone was suited at the ASU meet, but I can guarantee they were in mid training cycle.

Would require him to swim

If anything, the improvement SCM to SCY would be more for the IM, because he is actually insane at surface swimming free/fly, less so for back/breast.

If you can medal at an ASU IM event, you can probably medal at the Olympics

According to the scoreboard in the video, House is 6th now with 47.42.

Is there anyone who can possibly keep up with his 2nd 100 other than Seto in the IMs? The lead he put up on House on the breast and free underwater leg was disgusting

litherland is the only guy who can close like that, but doesn’t have the frontend

There a bunch of fast swimmers in the Desert these days