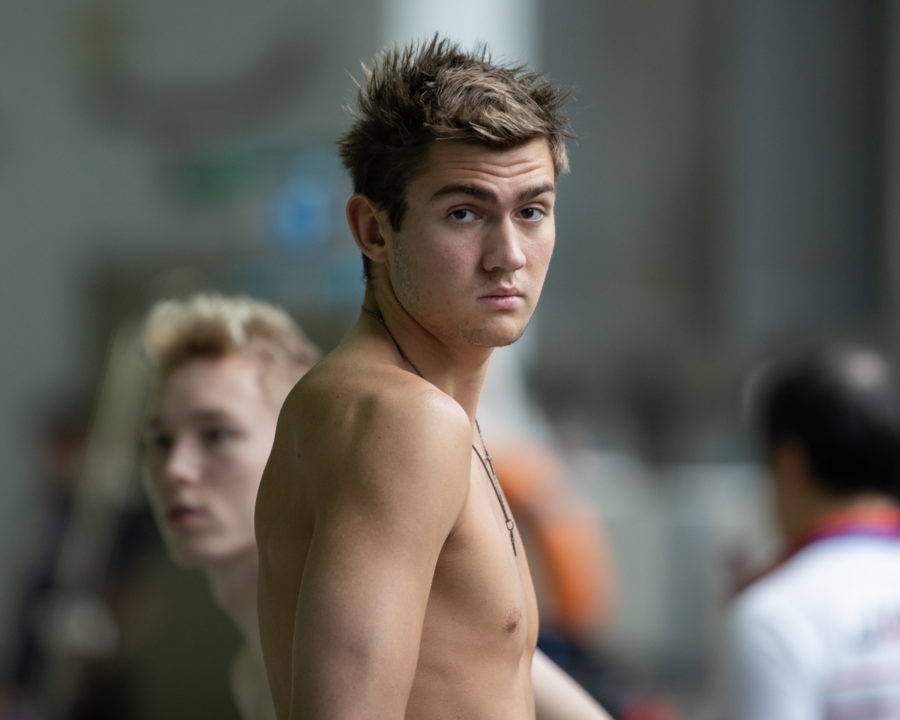 2021 marks the first time that Russia (including the Soviet Union) has hosted a European Championship event in swimming. Above, Kliment Kolesnikov won 6 gold medals at the last edition in 2019. Archive photo via “Rafael/Domeyko Photography”

LEN, the governing body for aquatic sports in Europe, has moved the 2021 European Swimming Championships a month earlier on Thursday after FINA announced a shift of the World Championships to December 2021.

The new dates come after FINA announced that the 2020 World Short Course Swimming Championships are moving to December 13-18, 2021.

Leaving the European Championships in the fall is another scheduling hurdle ahead of what the upstart team-based International Swimming League is preparing as an expanded 6-month schedule after the Tokyo Olympic Games.

LEN’s announcement on Thursday leaves the European Championships in Kazan, Russia, in spite of the fact that a World Anti-Doping Association sanction includes removing hosting of all international sporting events from the country until 2024 over irregularities in the national doping program. Russia is currently appealing that punishment.

“We are delighted that we could find the new dates quickly and I’m sure that the event in Kazan will add another chapter to the success story of the European Short-Course Swimming Championships,” Russian Swimming Federation President Vladimir Salnikov said of the news.

“On whatever dates we hold our premium 25m event, it’s usually a tremendous success since our globally renowned stars always produce fiery races and offer fantastic entertainment for the fans” LEN President Paolo Barelli said. “The European Short-Course Championships have grown into a major spectacle in recent years. Herning, Netanya, Copenhagen, Glasgow, just to recall the last editions, were all great hits in all aspects and we expect nothing less in Kazan. Let me thank Tatarstan President Rustam Minnikhanov, Sport Minister Vladimir Leonov and the President of the Russian Swimming Federation Vladimir Salnikov for acting immediately and supporting us to find the best solution on such a short notice.”

This move will mean that 2021 will continue to have 2 European Championship events in swimming, with the European Aquatics Championships (long course swimming, diving, artistic swimming, and open water swimming) running from May 10-23, prior to the Olympics.

The last edition of the European Short Course Championships were held in 2019 in Glasgow, Scotland. Russia led that medals table with 13 gold and 22 total medals, followed by Italy (6 gold, 20 total). Many of the continent’s top-name swimmers, like Vlad Morozov, Danas Rapsys, Kliment Kolesnikov, Gregorio Paltrinieri, Arno Kamminga, Simona Quadarella, and Katinka Hosszu, participated in that event, but with the meet 2 weeks before the ISL finale, participation was not unanimous.

2021 marks the first time that Russia has hosted the European Championships in long course or short course, in spite of being the most decorated nation on the continent in the latter. Germany leads the all-time medals table at the European Short Course Championships.

I saw was a picture of Nathan Adrian beside “LEN” and thought I’d missed a nationality switch somewhere down the line. They look really alike, don’t they!