Le Tops Griffin in 200 Back Showdown, But Missouri Rolls Past Missouri State 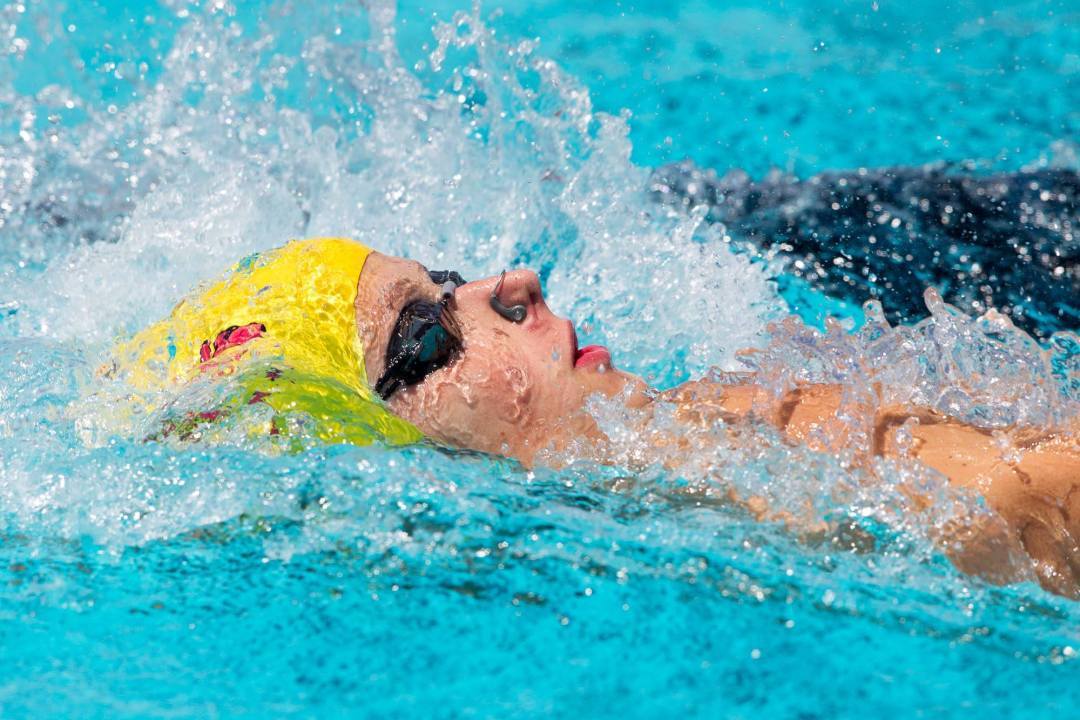 Paul Le may have won the big battle in the 200 back, but Carter Griffin (above) and the Missouri Tigers overwhelmed the war on Friday in Columbia. Archive photo via Tim Binning/TheSwimPictures.com

While the Missouri State Bears have had a great run of success over the last few seasons, on Friday in Columbia, the Missouri Tigers reasserted their dominance in the Show Me State by winning 24 out of 26 events in the co-ed dual meet.

With no punches pulled by exhibitioning races, the Missouri men took a 189-54 victory, while the Missouri women won 200-43.

The most hotly-anticipated race of the night came in the men’s 200 backstroke, which pitted a pair of NCAA qualifiers against each other. Missouri State senior Paul Le was 20th at NCAA’s in that race last season, and Missouri sophomore Carter Griffin was 28th at NCAA’s last season, and the margin between the two on Friday was about the same as it was in March, with Le winning 1:45.65 to 1:46.92.

The two were about even over the last 50 yards, but by that point Le had already built an insurmountable lead.

There was no 100 yard stroke races at this meet, so Le swam the 50 free as his other race. There, he finished among a sea of Mizzou with a 2nd-place 20.21. Missouri had the other 6 out of the top 7 finishers, including a win from Matthew Margritier in 20.21.

That’s a huge contribution from Margritier and within three-tenths of his lifetime best already. He sat out last season after transferring from Northwestern and will have two years of eligibility for the Tigers. That will be key after talented young sprinter Max Grodecki was suspended from the Tigers at the end of last season and was subsequently removed from the team’s roster.

The other big showdown of the night came in the men’s 100 free, and this time it was Missouri who got the upper-hand. Michael Chadwick (44.76) topped Missouri State’s other NCAA qualifier – the supremely-versatile Uvis Kalnis (44.85).

“It was a great opportunity to race against an SEC school and show them what we are capable of,”Kalnins said. “I think we put on a good fight and posted good times.”

There were quite a few competitive battles in this meet, and though Missouri overwhelmed their opponent with depth, the Bears kept many races competitive at the top end.

One race where that was not true, however, was the men’s 200 breaststroke. In that race, Missouri State didn’t have anyone within nine seconds of the winner Sam Tierney, and for that matter, none of his teammates were very close either. Tierney swam a 1:57.73, which ranks him 5th in the NCAA this year. Unfortunately for him come February, 5th in the NCAA makes him only 4th-best in the deep SEC.

The Missouri men’s next meet will be a quad on November 7th and 8th against Kentucky, Northwestern, and SIU, and will feature Margritier against his old team for the first time since transferring. The Missouri State men have already had a very busy season with 8 days of competition already but will now take an extended break until the Louisville Invitational in three weeks: their last meet of the semester.

Working to the Tigers’ advantage is that they have two versatile pieces in Dani Barbiea and Anna Patterson who can swim multiple different legs of this relay. On this day, Barbiea split 55.90 on the backstroke leg and Patterson split 56.45 on the fly leg.

Working against them is that they need one more swimmer to be good enough to finish in the top 8 at NCAA’s. That one piece can be a backstroker, a butterflier, or a freestyler, but if they can find one more piece, the relay will come together. On this day, that piece was Dani Barbiea’s twin Kellie Barbiea, who anchored the relay in 53.61. Missouri State’s ‘A’ relay anchor and ‘B’ relay anchors both split faster, even though their whole relay times were 12 and 17 seconds slower, respectively.

Hayden could be that missing piece on the Mizzou medleys that will put them over the edge if she swims this well all season.

While the Missouri State women didn’t come out with any event wins, they can come away with the fact that they had 7 swims that went for lifetime bests on Friday night.

The Missouri and Missouri State women’s team will mirror their men’s programs schedules for the rest of the semester.

What’s the coaches reasoning behind not exhibitioning? They had the meet won. No need to have almost 5 times as many points. Seems disrespectful to me

Tiger – while lots of people have different opinions on the whole “exhibition” versus “not exhibition” thing, I have no problem with teams not exhibitioning swims. I can’t imagine, especially in a sport that involves racing, what sort of disrespect a team would feel about losing races, or what kind of respect they would feel when a team rolls over and allows them to write “race winner” on their resume when such a thing didn’t actually happen.

But maybe that’s just me.