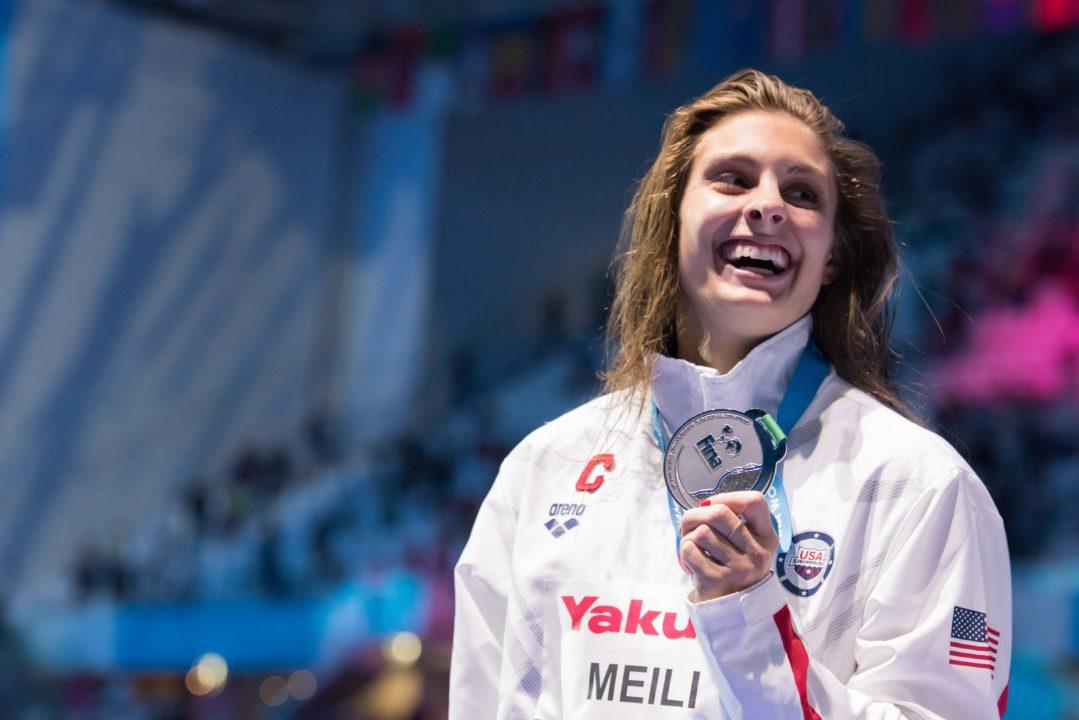 Olympic and World Championship medalist Katie Meili has joined the Georgetown University Swimming and Diving staff as an assistant coach, head coach Jack Leavitt announced on Thursday. Meili, who announced earlier this summer that she would be attending Georgetown Law School in the fall, is coming off a highly successful last-12-months, having earned Olympic gold (4×100m medley relay) and bronze (100m breast) in Rio last summer, and gold (4×100m medley relay), silver (100m breast) and bronze (50m breast) this summer at FINA World Championships in Budapest.

“We’re thrilled to add such an impressive person as Katie to our staff,” Leavitt said. “Our team will benefit greatly from her presence, not only from her experience at the Olympic and world championships levels but her college experience at Columbia is very similar to what our team lives day in and day out. It’s inspiring to see what she accomplished and continues to accomplish as a student and a swimmer.”

Meili swam for Columbia University and was twice named Outstanding Swimmer of the Meet at Ivy League Championships (2012 and 2013). She is a two-time All-American and ten-time Ivy League champion. “I am thrilled to have the opportunity to work with the Georgetown swim team during my time at Georgetown Law,” Meili said. “I am grateful to Coach Leavitt and (Assistant) Coach Laura McGlaughlin for allowing me to get involved with the program and I am eager to both learn from and share knowledge with this incredible group of student-athletes.”

Will she be training there as well?

GW has the best collegiate swimming program in the district, but GW is about a mile and a half away from Georgetown and GTown doesn’t have a metro stop. So I’d assume she’s training at GTown

The Law Center is not anywhere close to the main Georgetown campus.

Catholic University is on the rise!

Impressed that she has time for that and training. 1L is no joke.

A realistic expectation would be to do a single workout of resistance training or swimming 6 days a week, stay in general shape, reassess from there. It might get a bit easier in 2L, but once she graduates, it’s going to be tough, especially if she goes with a big firm. She’d need to keep her technique, stay in general strength and conditioning, and then fully commit 18 months out from Tokyo if that’s what she wants.

As long as she is flexible with her training schedule, this is doable. I went from a D1 swimmer to a first year law student and still had time to work out 1-2 hours a day while studying. Most if not all of your 1L classes are scheduled for you, so she would need to be able to swim around that schedule, which would make working out with a club team more difficult. She could probably do it in the mornings though.

My mom ran in the olympics while at Stanford Law – if she want’s it, she can do it. Columbia is not exactly a walk in the park either, and she made fantastic improvements there. If anyone can do it, Katie can!

Wow, that’s a lot to take on. Good luck to her.