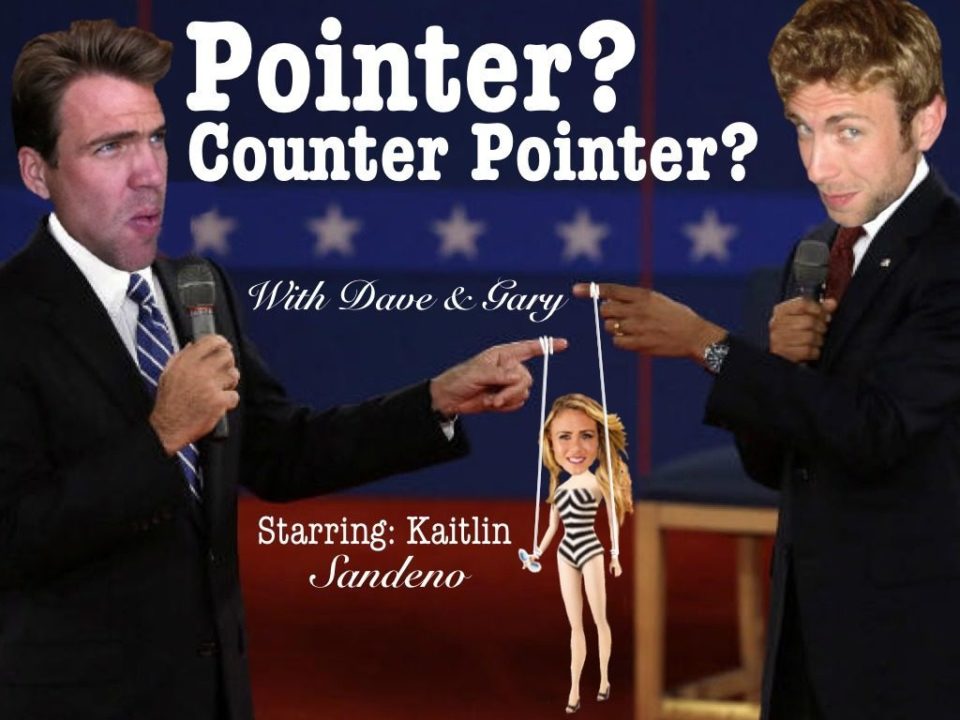 For once this is a good column, we promise. Now, if only we could get Kaitlin Sandeno to do our jobs for us every week.

Gary: Kaitlin Sandeno, welcome. I often brag that you and I are friends. And David Cromwell knows who you are. I don’t know if he’ll admit to it or not but he keeps a poster of you “glued” to the inside windshield of his yellow Pontiac Aztec. Quite. A. Fan.

Gary: So are you ready for the interview?

Kaitlin: I will get on this later today. I’m at a pheasant hunt right now. For charity. Not a hobby.*

Gary: Dave, I promised Kaitlin that we would address in our column today some of the charitable causes she is involved with.

Kaitlin: This Dave guy’s creepy, but I will deal with it as long as I can tell you all about the Jessie Rees Foundation and NEGU – which stands for “Never Ever Give Up,” the foundation’s motto.

David: Sorry, the first time was on accident. The second one was a subtle hint that we don’t have enough time for Kaitlin’s charitable causes.

Kaitlin: Some of us think it’s important and enjoy giving back. Like how Gary is trying to save the Liger population in India, one cub at a time.**

Gary: Uh huh. We funnel money through the Saint Gary Charity to address Liger and Tiglon needs (we don’t discriminate against Tiglons). Because a tiger and a lion aren’t dangerous enough by themselves we condone cross-pollination.

Unfortunately, like so many other exotic, man-eating pets that people get with unrealistic expectations, a lot of Ligers and Tiglons inevitably end up in a shelter or released into the Everglades where they reproduce like Brazilian mosquitos.

David: Well, all that aside, I’ve been reading your Wiki page, and I want to spend the bulk of the interview on that.

Gary: There’s the originality I love and expect.

David: Anyway, what first grabbed my eye was “She swam as one of the top competitors in freestyle events, and helped the Gator team.” That’s just compelling writing…

Gary: David actually has a valid point here. He’s being sarcastic. (With a kind of half-assed laugh) He’s kind of funny that way. (Suddenly serious) Seriously though, your Wiki page needs editing.

David: Not true! It’s genuine, and that’s what’s important in life. On a side note, I just realized I’m ruining the interview; this Wikipedia thing is going nowhere.

David: Who’s the funniest girl swimmer you know and why? Anecdote/joke?

Kaitlin: Me. Oh wait, I can’t say that huh?!? Then I’d have to say Allison Schmitt. She’s just full of good, clean, wholesome jokes. She’s a delight and refreshing to be around.

Gary: I’ve met this Schmitty you speak of. And procured from her the right to address her as Schmitty. I think she’s funny and charming too. Tell me more about NEGU and how you’re involved.

Kaitlin: NEGU is associated with the Jessie Rees foundation. The mission is to spread hope, joy and love to children fighting cancer and to inspire others to Never Ever Give Up.

I’m the national spokesperson for the NEGU proTeam. I go to hospitals around the country and deliver joy jars (64 oz containers filled with goodies for children fighting cancer) and hang out with the courageous kids, show them my medals and try to bring other Olympians and pro athletes to the hospitals.

The swimming community has been awesome supporting NEGU. Tyler Clary, Jason Lezak, Matt McLean did a visit with me. Charlie Houchin did one for us in his hometown. Pretty sure Kara Lynn Joyce is joining me with one in Denver coming up. Rebecca Soni, Ryan Lochte, Allison Schmitt, Jessica Hardy and others have given us shout outs. We are just really trying to spread the word.

Kaitlin: Sorry I’m a huge talker – like you couldn’t tell – and I’m so passionate about this foundation I could go on all day. Probably easier to check it out at: www.NEGU.org

Kaitlin: Oh and pretty please help me get 250,000 likes on the Jessie Ress Foundation facebook page!!! A large donation is ours if we do so! $25,000 will help us spread a ton of hope, joy and love to children fighting cancer!

David: Let’s… sorry, are you done?

Kaitlin: I can be?

David: Cool. Let’s say I come at you with “Hey, Kaitlin, get it while the getting’s good like me! No one is going to take care of you but you, so uh, you gotta look out for, well, you!” If I uh, if I did that, what would you say?

Kaitlin: You got to do what makes you happy David. After I retired from the sport I wanted to find something that truly made me happy. I absolutely love what I am doing and find it so rewarding. I feel blessed to wake up each morning and be excited to “go to work.”

Gary: You know what makes me happy? Every moment that David Cromwell doesn’t speak.

Suppose you were enabling organ…

Kaitlin: Hold that thought! I’m off to play soccer against 9 year olds. Bizarre day of events. Just another day in the life of Kaitlin Sandeno. Time to show no mercy to my niece’s soccer team!

Gary: I’m stealing this question from a different swim site, because I’m the worst swimming journalist ever: Do you think people actually write in questions to Katrina Radke? Or do you think that it’s just Katrina molding “questions” for herself to prompt a topic she’s preselected to blog about?

David: You know, at this point, more questions from me would really not help this interview. I’d rather just enjoy listening to you two.

Kaitlin: Second that. It reminds me of the line from Mean Girls, “She doesn’t even go here”…

David: No Way! That’s my favorite movie too!!!

Gary: Kaitlin, I consider you a close enough friend to ask you a tough question. In my career I witnessed eating disorders, despite best efforts to conceal them. Are eating disorders an under-addressed issue in sport? And how do we go about addressing a very delicate matter that most would rather turn a blind eye to (much like coach/swimmer relationships)?

Gary: You don’t get questions here that you get anywhere else.

Kaitlin: Well luckily I never personally dealt with either. I feel very blessed with my upbringing in the sport. I think I could count on one hand how many girls I knew had an eating disorder but I also don’t doubt I was oblivious to others. I really just did my own thing while I was swimming and that was that. I’m by no means pushing eating disorders under the rug, it’s obviously a terrible issue but its one I don’t have much experience/knowledge with so I feel like I can’t properly address it. As far as the coach/swimmer relationship….Wow, it’s very disturbing and troubling. I think for once you have me at a loss for words Gary.

Gary: Yeah, I have that effect on people. Which contributes to making me the worst swim journalist ever.

David (ignoring Gary): Tough issues, and an easy “fix all” doesn’t exist, so I think that it’s good to acknowledge the complexity here instead of just shouting talking points. You know, like Gary always does.

Gary: I agree with that statement. I just recognize a need to recognize something that we all know exists but do nothing about. Is there at least one eating disorder on every collegiate team in the United States? I don’t know the answer to that question. I don’t think anybody does. It’s a serious problem, and I think we’d all be shocked at the prevalence, if that data was ever compiled. It’s not a fun issue to address and it’s definitely not funny.

Okay. About-face. If you could cure cancer but had to kill every dolphin on the planet to do it, would you?

Kaitlin: Ahahahhahahahahahahahah! Like you said, “You don’t get questions here that you get anywhere else.” Hall Jr./ Cromwell 2016!

*Just so we’re clear: that actually happened.
**That didn’t.

A “different swim site”? Come on Gary- I know you are pissed I said the Viking was a worse swim journalist than you, but our readership is small enough already without you failing to even name us.

Everyone, the swim site is The Swim Brief, featuring Chris DeSantis. A proper journalist would have created that link in the article, Chris. Again, proving my incompetence. If every one of our Dave N Gary readers visits your site, you’ll have like eight readers. So, you know, don’t be like too, like, hostile, man.

I submit the question to our readers: If you could cure cancer but had to kill every dolphin on the planet to do it, would you? Yes or no?

It hadn’t occurred to me that in addition to curing cancer you’d also end hunger. Compelling argument in favor of eradicating dolphins… er, curing cancer.

Kaitlin Sandeno is one of the nicest swimmers I ever met! I love her, and support her NEGU charity, as most should.

Thaks for talking to her!