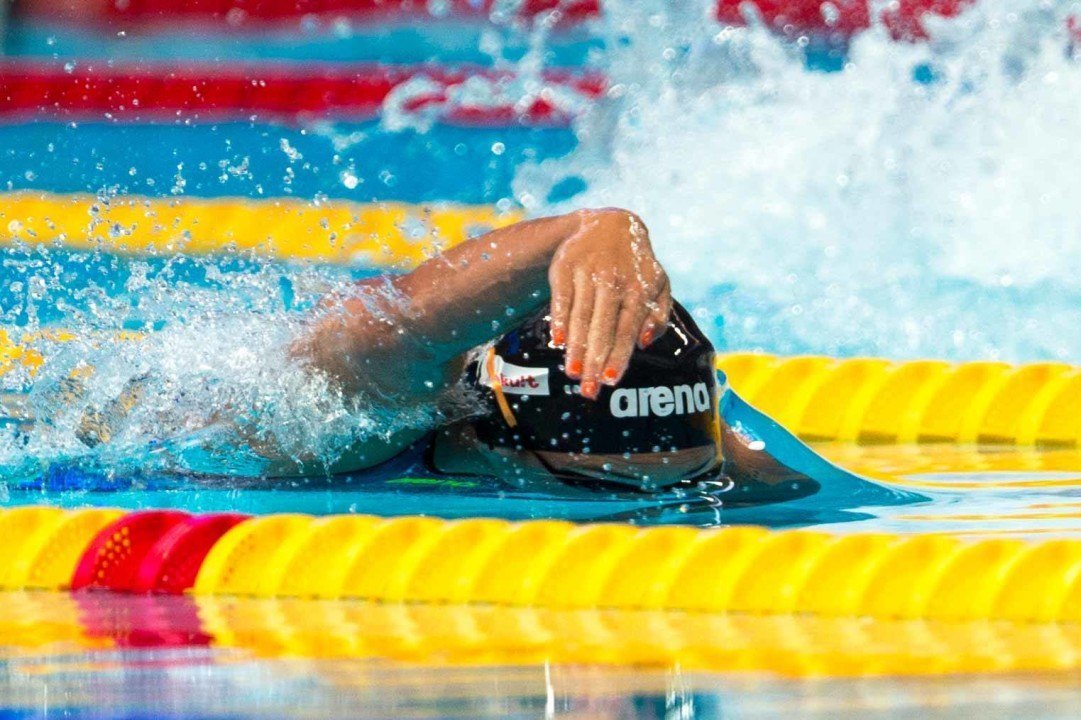 Ranomi Kromowidjojo finished off the 2015 Indian Ocean Championships with wins in the 50 fly and the 100 free. Dutch teammate Heemskerk took the 200 back, and Jan Sefl jumped into the world rankings by winning the 50 fly. Current photo via G. Scala

This morning, Dutch sprinting phenom Ranomi Kromowidjojo added her fourth and fifth victories of the week at the short course meters 2015 Indian Ocean Championships, first by dominating the 50 fly by nearly two seconds. She finished the race in 25.39, to second place France’s Emma Morel, who finished in 27.31.

Next, she took on her specialty 100 free against her fellow Dutch swimmer Femke Heemskerk. Kromowidjojo finished first against a strong showing from Heemskerk, 52.57 to 52.95. Kromowidjojo currently holds the third fastest time this season in the event, a 51.39 from European short course champs, while Heemskerk is ranked ninth from the same meet.

Czech record holder in the 200 distance Jan Sefl also took the men’s 50 fly by a huge margin. He won the event in 23.70 to second place Louis Marcelin‘s 24.99. That swim shoots the previously unranked Sefl into the top 25 world rankings, displacing Michael Andrew for the 10th fastest swim in the event this season.

After winning the 200 fly last night, Hungarian superstar Zsuzsanna Jakabos added another win in the 200 IM, clocking 2:10.69. The men’s event was a battle between Frenchmen Anthony Pannier and Jean-Patrick Bernet. Bernet had a huge lead after the first 100, splitting 58.94 to Pannier’s 1:01.67. Pannier crept ahead in the breaststroke and finished the race off in a 28.18 freestyle leg to win the race in 2:04.70. Bernet finished just behind in 2:04.87.

Bradley Vincent of the island of Mauritius set a new Mauritian record to win the 100 free, swimming 48.75 to improve his previous 50.16 by well over a second. French swimmer Lorys Bourelly finished second in 49.74.

The 100 breaststroke events went to the Czech Republic’s Martina Moravcikova (1:08.66) and France’s Yannick Chantelain (1:02.56). Both came in about a second and a half ahead of the field.