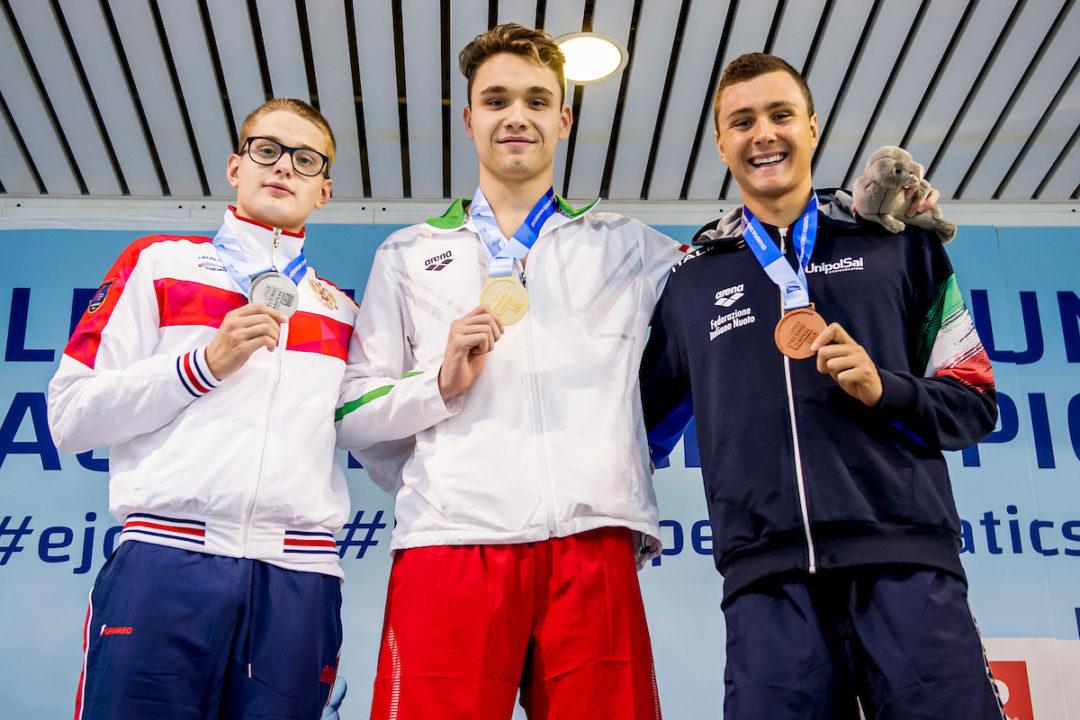 After establishing himself as the top seed in the men’s 50m free semi-final as the first event in the last session of these European Junior Championships, it looked as though Russian beast Kliment Kolesnikov was on his way to securing yet another individual gold medal.

After winning 50m, 100m, and 200m backstroke gold, Kolesnikov fired off a splash n’ dash time of 22.63 to sit .04 ahead of Sweden’s Bjoern Seeliger entering the 50m free final this evening.

Seeliger put up a roadblock to the Russian’s plans, however, producing a winning time of 22.27 to take 50m freestyle gold. That cleared Kolesnikov by a full .34, as the backstroke world junior record holder touched in 22.61 for silver. Bronze in the race went to Great Britain’s Lewis Burras, who finished in 22.69, a new personal best.

The women’s 50m butterfly was another tough sprint battle, as Belarusian standout Anastasiya Shkurdai threw down a mark of 26.44 to take the gold among a trio of sub-27 second women. Behind her was Germany’s Maya Tobehn, finishing in 26.78 for silver, while Turkey’s Aleyna Ozkan took bronze in 26.83.  Shkurdai was faster in Indy last year at those World Junior Championships, finishing in 26.35, which gave her a 4th place finish.

200m IM silver medalist at these championships, Maksim Stupin of Russia, upgraded his result to gold in the grueling 400m IM, winning in 4:16.79. At these same championships last year it took Hungary’s Balazs Hollo just 4:19.55 to wrangle in the win, so Stupin’s performance this evening was almost 3 seconds faster than that.

Stupin’s effort tonight checks-in as the 18-year-old’s career fastest, beating out the 4:16.90 produced earlier this year at the Russian National Championships. His time sits just outside the world’s top 25 performances so far this season.

Greece’s Apostolus Papastamos finished less than a second behind the Russian this evening to take silver in 4:17.44, while 200m IM champion here, Tom Dean of Great Britain, rounded out the top 3 in a mark of 4:18.07, his fastest time ever.

Daria Vaskina of Russia already turned heads with a new European Junior Record in the 50m backstroke, clocking 27.90 on night 3 for the win. During this last finals session, the 15-year-old notched a super quick 59.90 to represent the only swimmer of the 100m backstroke field to venture into sub-minute territory for the win. Vaskina upgraded her silver result from 2017, where she raced to a time of 1:00.90 to finish behind Polina Egorova.

Teammate Anastasia Avdeeva was right behind in 1:00.39 for silver in tonight’s 100m back race, while Italy’s 50m back bronze medalist, Giulia D’Innocenzo took bronze once again here in 1:01.08.

The men’s and women’s breaststroke races were slightly underwhelming, as neither winner came close to the meet or European junior marks. Russia’s Vladislav Gerasimenko clocked 1:01.36 for gold on the men’s side, while Lithuania’s Kotryna Teterevkova proved fastest for the women in 1:08.03.

For comparison, in 2017, Ireland’s Mona McSharry took the title in 1:07.61, while Italy’s electric world junior record holder Nicolo Martinenghi rocked a then-WJR of 59.23 to take the men’s race.

With just the women’s 200m IM final separating the 2 races, Hungary’s superstar teen Kristof Milak raced his way to both a 200m freestyle and 100 butterfly gold medal in the span of less than half an hour.

In the former race, Milak clocked a winning time of 1:47.19 for gold in a new personal best. Entering these championships, his career fastest was the 1:47.97 earned at Hungarian Nationals. As such, his effort this evening marks just the 2nd time the 18-year-old has been sub-1:48 in the event.

Israel’s Denis Loktev also notched a new personal best, rocking a 1:47.95 for silver. This is Loktev’s first time ever under the 1:48 threshold, as his previous best was represented by the 1:48.22 he produced at this same meet last year.

Milak finished his individual event campaign here in Helsinki with a monster 100m fly time of 51.78, easily beating the field for yet another gold medal. The time, albeit well of his own 50.62 European Junior Record from last year’s World Championships in Budapest, was still a solid effort given the short time span between his 2 events.

Andrei Minakov of Russia held on for silver in 52.38 tonight, while Italy’s Federico Burdisso took bronze half a second later in 52.88.

Milak’s 51.50 from Hungarian Nationals remains tied as the 6th fastest time in the world this season.

Russia’s Anastasiia Sorokina finished the night with a gold in the women’s 200m IM, where she touched in 2:14.38. Her fastest time headed into this meet was the 2:16.53 logged in just this past April, so the 14-year-old collected a big personal best with her gold this evening.

Behind her was Italy’s Roberta Circi, who took silver in 2:16.27, while Ajna Kesely of Hungary, who already has a purseful of hardware, settled for bronze in 2:16.39.

Hungary successfully defended its women’s 4x200m freestyle title from last year, as the combination of Fanni Fabian, Petra Barocsai, Blanka Berecz and Ajna Kesely combined to clock a winning time of 8:02.24 over Germany. Splits included 2:01.15 for Fabian, 2:00.28 for Barocsai, 2:03.08 for Berecz and a speedy anchor of 1:57.73 for Kesely.

The men’s 4x100m medley relay from Russia clocked a winning time of 3:35.58, just .34 shy of the European Junior Record. Kliment Kolesnikov led off in 53.72, followed by Vladislav Gerasimenko‘s breaststroke split of 1:00.57. Andrei Minakov kept the lead in 51.84 on fly, while Daniil Markov closed out the win anchoring 49.45.

Their time was enough to easily beat Germany, who touched in 3:39.16 for silver, while Italy also landed on the podium with a bronze medal-garnering effort of 3:39.28.

Spajari went 48,7 on prelims I think

Is the last pre meet for the pan pac team plus some swimmers Pinheiro sent.

First bobo comment in a long time not being downvoted to hell… whoa!

Hagino hasn’t been in good form after Rio. Don’t know what happened with him.

Only one medal for the French team. Beaugrand second in the men’s 800 free.
Anyway we never expect crazy things from our juniors. Historically we mature later than in most of other nations. 🙂
The goal for these swimmers is Paris 2024. Nothing else.

I did not expect Milák to pull this double. It obviously helped that Dean had the 400 IM before the 200 free.

I could see Nemeth dropping at least a second. Milak might be good for a 1:45 flying start as well… dude is already a legend and no reason his free won’t go the direction of his fly (world beating). Hungarians might have a shot at a Euro win and possible upcoming World/ Olympic medal in the 4×2.

Same for our ladies at the Euros. Kesely just anchored 1:57.75 (fully exhausted). Hosszu can always deliver 1:56, then we have three more girls at 1:58 low

And on the last day. Helped for sure, but yesterday 100 fly was the first race of Minakov and he couldn’t do anything with him.

To be precise Milak delivered that double in 12 minutes.

Curious that nothing in the article itself mention Milak though. Wanted more details like everyone else got.

That’s the breakthrough 200 free swim I’ve been waiting for from Anderson. Her stroke, speed and endurance has long pointed towards the 200 free being the event she could excel at most. Race by race her fitness is returning.

Milak is sublime. An extremely rare talent – Hungary are very lucky to have found a man who looks more than capable of replacing Cseh. Can not wait to see him in person at Euros!

Good 400IM PB for Tom Dean, but it totally killed his 200fr. The junior stage is the one to learn these lessons though!

Indeed, big swim from Anderson, whose 200 pb has always seemed rather inconsistent with her swimming ability. The GB 4×200 relay is starting to look quite solid, with SMOC, Hibbott, Faulkner and now Anderson all in the 1:56-1:57 sort of range.

Despite a tough 200 free, a good meet for Tom Dean, with multiple PBs. Great talent, and a potentially useful addition to the 4×200 relay.

On a side note, any ideas why Burras didn’t swim the 100 free? His relay splits were consistent 49-low throughout, would’ve been interesting to see what he could do in the individual…

Very impressive split from Freya. Promising especially because she was well of her best time in the 100.