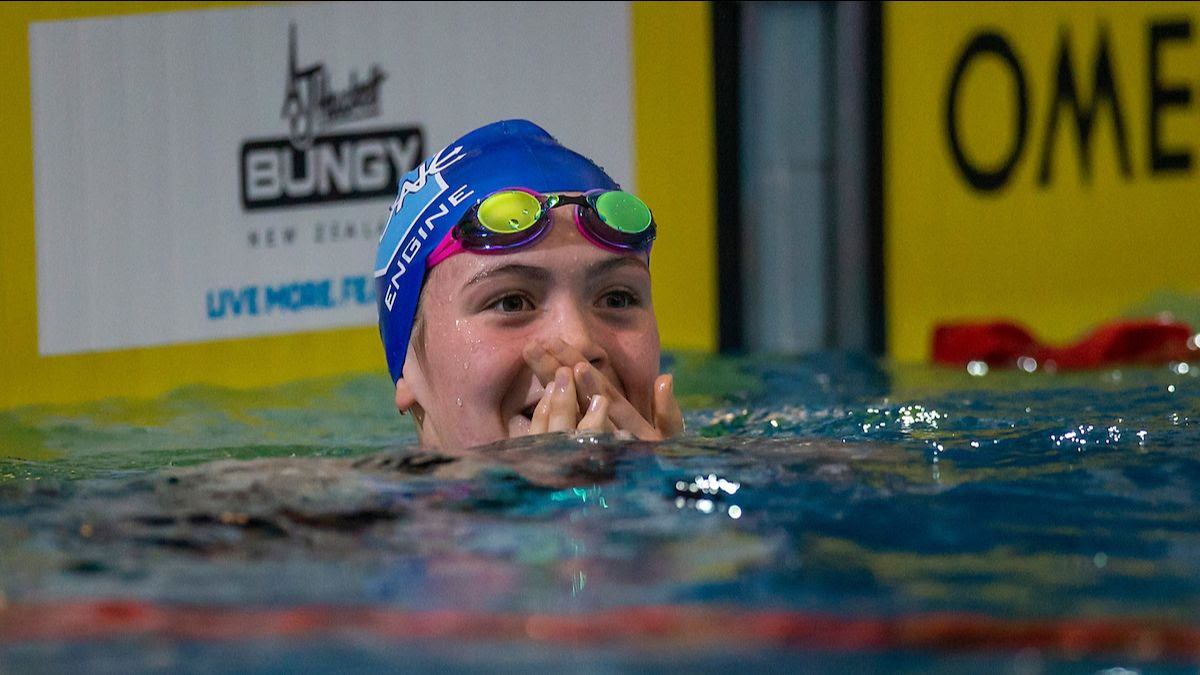 "I would love to continue on and achieve great things as she did," teen Erika Fairweather says of retired Kiwi Lauren Boyle. Archive photo via Swimming New Zealand

Along with national record holder Helena Gasson, 16-year-old Erika Fairweather was just named New Zealand’s ‘Domestic Swimmer of the Year’ for 2019. The Neptune Swim Club star has been progressively emerging as an international mid-distance freestyle threat on the cusp of breaking through to the senior ranks just in time for the now-postponed Olympic Games in Tokyo, Japan.

Heading into last year’s FINA World Aquatic Championships, Fairweather put on an absolute show in the women’s freestyle events at the NZ Open Championships, claiming wins across the 100m, 200m and 400m freestyle. The then-15-year-old clocked an impressive time of 4:09.33 in the latter to dip under the 4:10 threshold for the first time in her young career and clear the FINA A cut outright. That hacked almost 3 seconds off of her previous lifetime best of 4:12.10 notched just in the spring of 2019.

Although Fairweather didn’t produce her best in Gwangju, hitting just 1:59.68 for 19th in the 200m free and 4:12.30 for 12th in the 400m free, the teen bounced back with 200m free gold at the World Junior Championships. There in Budapest last August, Fairweather busted out a lifetime best time of 1:57.96 to top the 2free podium, denying Aussie Lani Pallister a clean sweep of the mid-distance freestyle events.

Not resting on her laurels, Fairweather persevered to produce a huge new best in the 400m free this past February at the Vic Open in Australia. Competing down under, Fairweather punched a time of 4:07.23 to establish a new New Zealand Age record in the event and insert herself as the 8th fastest performer in the world this season.

In terms of what Fairweather can point to as a driver of her success, the teen told SwimSwam this week, “I would say it’s down to my training.”

Along with the likes of Caitlin Deans and Ciara Smith, Fairweather trains under coaches Lars Humer and Kurt Crosland. Humer was just named Swimming New Zealand’s ‘Coach of the Year’

“I have great coaches who want nothing but the best for me, so they do all they can by using their knowledge and experience to give me as many opportunities to better myself as possible. It’s then up to me whether I optimize them or not.

“Naturally I will optimize them. I’m not one to shy away from opportunities/challenges whether it’s hitting certain times in a set or a technical point I’ve been working on. Knowing that these challenges are going to make me a better swimmer is how I’ve been able to enter a new level of performance.”

Speaking of times, I asked Fairweather what clicked for her when she produced the 4:07.23 400m free head-turner earlier this year.

“I was pretty surprised when I clocked that time,” she candidly told me. “I had done a 4:08 a few weeks prior at a local meet, so I knew I was capable of going 4:07 when the time came; I just didn’t think it would be before trials.

“I wanted to go as close to a 4:07 as possible before Trials and this was one of the best opportunities to do that.

Contributing to her racing plan is what Fairweather pursues in practice, which involves mindful racing sets. “I love racing my teammates during our sets. Whether it’s the whole set, part of a set, or a sprint 50, it will be loads of fun.

But what swimmers produce in the pool is only part of the overall success equation, which led me to find out who inspires Fairweather from a character perspective.

“One of my best mates inspires me. She is the most resilient person I’ve ever met. She refuses to give in, even when things are bad. She continuously gets back up and finds her feet, as well as helping others to do the same.

“In addition to her, Danyon Loader is a big inspiration for me coming from Dunedin. He dominated the middle distance freestyle events at the 1996 Olympics [gold in 200m free and 400m free]. Even though he finished his career before I was born, his legacy remains great at our pool and he is definitely whom I look up to and draw inspiration from.”

New Zealand’s most recent female freestyler to have international success has been Lauren Boyle. Now retired, Boyle earned 19 elite championships medals, including 800m and 1500m free silvers at the 2015 World Championships. As such, it’s hard not to draw a line from Boyle to Fairweather, to which the latter is not immune.

“Lauren Boyle is New Zealand’s best female mid-long distance swimmer to date and definitely one of the best in the world. She brought the presence of the swimming world to the rest of New Zealand.

“I would love to continue on and achieve great things as she did.”

She improved her personal best in 200 free during 8FRR at Gwangju.