Kira Toussaint Speaks Out About 100 Backstroke Re-Swim, Missing the Podium 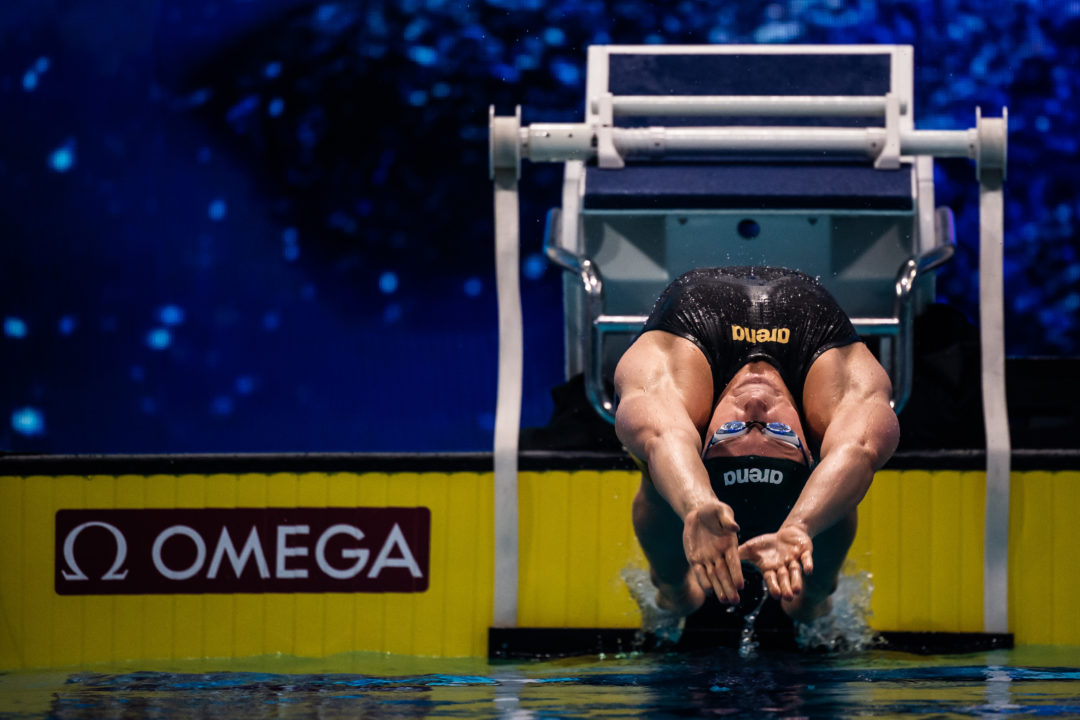 Following the 100 back re-swim at the European Championships, Kira Toussaint spoke out about her 4th place finish, after initially coming in 2nd. Archive photo via Mike Lewis/Ola Vista Photography

Following the controversial 100 backstroke re-swim at the 2021 European Championships, Dutch standout Kira Toussaint spoke out about her emotions surrounding her 4th place finish, after initially finishing 2nd in the final.

In the original women’s 100m backstroke final, Toussaint finished 2nd to Great Britain’s Kathleen Dawson, who won the event in a European Championship Record of 58.18. However, due to a malfunction with the starting system, the swimmers in lanes 7 and 8 did not hear the starting horn. As a result of the malfunction, officials decided to invalidate the times from the original final, electing to hold a re-swim of the event.

When the dust had settled on the re-swim, Toussaint fell two places in the final standings, finishing 4th with a time of 59.32, .3 seconds short of her original time. Instead, Italian 200 backstroke specialist Margherita Panziera had the better performance on the redux and took the silver medal, chopping a half second off of her original time to touch in 59.01. Dawson still claimed the gold medal, while Maria Kameneva retained her bronze medal finish.

Toussaint posted about her experience on her Instagram account. “In the ‘first final’ I heard the problem with the starting device,” Toussaint wrote. “I doubted while swimming under water whether I had to race or not, but I saw everybody else going, so I went as well. It wasn’t a perfect race but in the end I was very happy with a silver medal.”

“While I was waiting for the victory ceremony, I received the news 2 minutes before that it was canceled. 30 seconds later I saw my coach who told me: we are going to swim again and it’s going to happen right now.”

“It was stressful,” Toussaint continued, “…someone had to pick up a dry competition suit from the hotel. At that point it was still unclear what time we would race.”

“I’m proud of how calm and positive I remained, but at the end of the ‘second final’, my tank was empty. 4th…seems unfair, it feels like I’m robbed of a silver medal, it is painful. But, it’s only a bump in the road. I will be back stronger.”

Panziera, who swapped finishing places with Toussaint, also addressed the matter during a TV interview with an Italian news outlet. “I know that I don’t deserve the medal,” Panziera stated, “the silver is for Kira.”

Wow, I really respect that quote from Panzierra. Takes humility to say something like that.

For the most part, the swimming community is a family. We respect one another greatly.

Agreed, very similar vibes to the Sydney Olympics All-Around woman’s final after Raducan was disqualified and the girls didn’t want their medals.

Yes, but I think what would make this story even better is if she have Kira the medal.

Maybe she has given it and just didn’t want to make it public? That would be the best.

6
0
Reply
He said what?
Reply to  iceman

That is a lovely thought.

I see the reason for the reswim: hansson didn’t have a fair chance to race because of the malfunction. I don’t understand why the times from the first final couldn’t stand, though. Reswim it, sure, but my view is the times from the second final should only be taken into account if they’re faster than the first. It seems more fair to all of them?

I guess it would still be unfair to Hands-on because she would have only one final to make a good time while the others would have two chances.
Any way, this king of problems should not happen during a European championship