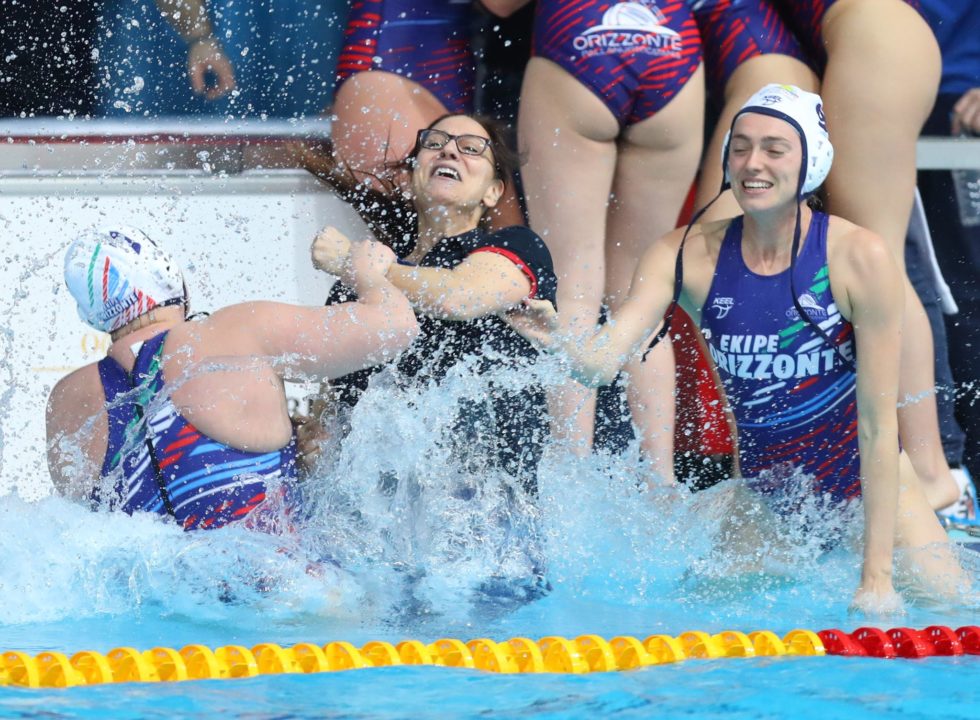 Just like in the Super Cup final in November, Orizzonte upset title-holder Sabadell and earned a fine 12-13 away win. Archive photo via LEN Media, Stas Levshin

Just like in the Super Cup final in November, Orizzonte upset title-holder Sabadell and earned a fine 12-13 away win. Last year’s runner-up Olympiacos had the better finish in the Greek derby and their two-goal victory in Vouliagmeni promises another F4 appearance for them. The clash of Dunaujvaros and Uralochka remained wide open as their match was tied, while 2017-18 winner Kinef already booked its place in the final after hammering Utrecht.

In the re-match of the Super Cup final – and that of last year’s quarter-final –, Orizzonte upset once more Sabadell and gained a single-goal advantage before the second leg due in Sicily.

Back in November a great run in the first half founded Orizzonte’s triumph, this time the first period recalled those memories as the Italians jumped to a 1-4 lead. But Sabadell started coming back already in the second, after falling 1-5 behind the title-holders managed to net three goals in a span of 82 seconds. Though Orizzonte held on for a 6-8 lead in halftime, Judith Forca’s inspired play helped the Spaniards to level the score, she netted a double in 45 seconds for 8-8 and soon the hosts went ahead twice.

However, the 8-time winner Italians responded well and never let Sabadell increasing the gap. What’s more, after 11-10 it was the visitors who scored two in 40 seconds. Forca netted her 5th goal for 12-12 but then the hosts failed to put away two extras and that cost them dearly. Giulia Emmolo sent the ball home with 1:21 remaining and Sabadell missed its last man-up and the chance to save the game to a draw.

Kinef smashed Utrecht surprisingly easily: the Russians – champions in 2017 and 2018 – already built a massive 9-4 lead by halftime and then an 8-1 hammering in the fourth period landed them in the Final Four again after missing last year’s edition.

The other Russia team Uralochka played a great game in Dunaujvaros with a lot of twists and turns. The Hungarians jumped to a 5-3 lead late in the second but the Russians responded with three connecting goals (the last two came within 13 seconds!) and kept their lead till early in the fourth (9-10). Then came the Magyars and after long minutes of fighting, swimming and
great defending, they finally regained the lead, Geraldine Mahieu netted her 5th for 11-10 with 1:39 remaining. Dunaujvaros had the chance to double its lead but after a time-out Natalia Vorontsova scored an action goal to tie the match, 21sec before the end.

The Greek derby also offered some thrills. Vouliagmeni was in front in the first half but in the second Olympiacos scored twice in less than a minute for 5-6 then went 5-7 up deep into the third. The hosts had another fine spell, staged a 3-0 rush while shutting out their arch-rivals for 8:49 minutes and retook the lead at 8-7 with 4:44 to go. But Olympiacos had more reserves and
it was their turn to deny Vouliagmeni in offence in the remaining time while they could come up with a 0-3 run to earn a fine two-goal away win which sets them up to make the finals once again.

The return leg will be played in late March to leave the national teams enough time to prepare for the Olympic Qualification Tournament to be held in mid-March.