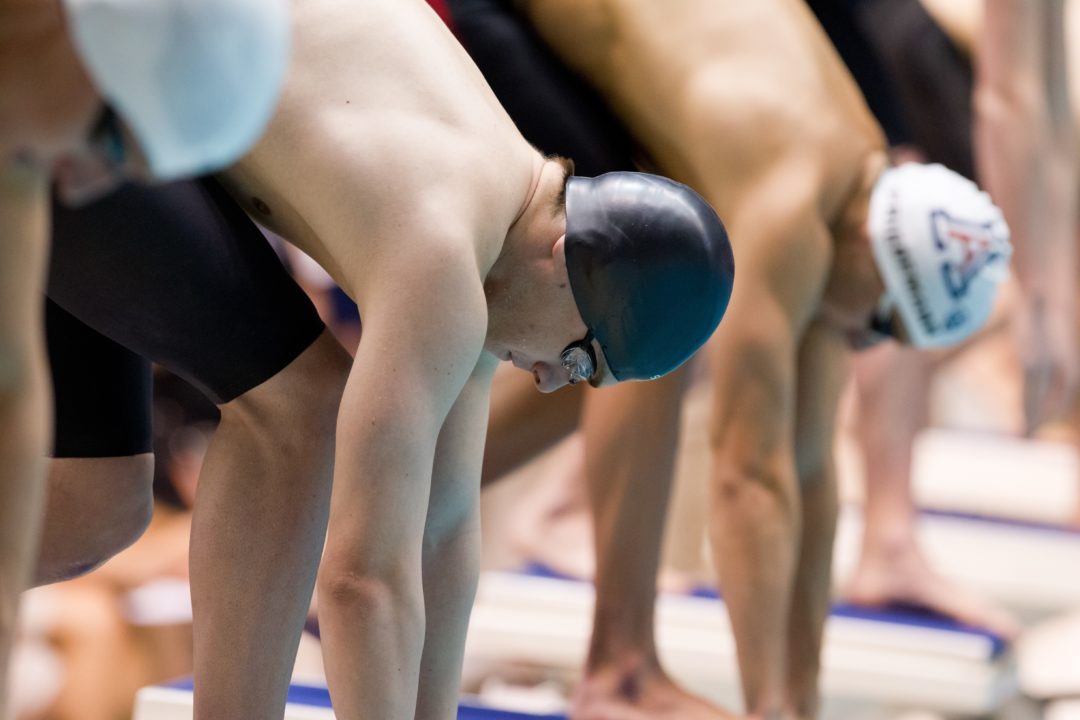 Harvard's Griffin Schumacher (black cap) is one of a huge core of underclassmen who will come back next season. (Photo: Tim Binning/TheSwimPictures.com)

Tyrrell was an assistant coach under Murphy for the last four years, and within the last month was promoted to Associate Head Coach.

Despite not ultimately scoring a single NCAA point last year, the Harvard men had one of the best overall collection of talent and performances in program history last year. That includes a group of underclassmen in Griffin Schumacher, Danny Crigler, Olvier Lee, Chris Satterthwaite, and Chuck Katis who all qualified for the NCAA Championships in 2013.

“I am excited to take over the head coaching duties during the upcoming season,” said Tyrrell. “The future is bright for the program thanks to the job Tim has done during the last 15 years.”

Both Tyrrell’s comments, and the release by Harvard, are ominously specific about the one-year appointment, but stopped short of calling it an ‘interim’ position.

It doesn’t matter who gets hired at Harvard, the name of the university will always bring in top talent. I find the conclusions of the article above interesting. Harvard often doesn’t score any points at NCAA’s and doesn’t bring many swimmers to the NCAA Championship. They get some top talent and one of the best classes each year, but the talent doesn’t seem to improve, which is a shame.

To be fair, Princeton has had success but so has Harvard. Harvard’s swimmers have in fact improved over their four years. They have had some real players that dropped a lot of time in college like John Cole, James Lawler, Alex Meyer, David Cromwell, and Geoff Rathgoeber. This past year Katis was on fire until he got the flu at NCs and their free relay dropped a lot of time. Tyrrell did the recruiting the past four years so we know the team will relate to him. I hope their recruits stay with Harvard because it’s only fun to swim Harvard because they are good.

Princeton Tiger – I agree that some of their swimmers have improved. Take Katis’ illness out of the equation, on average, Harvard Swimmers have often improved as freshman, maybe even sophomores, but they usually fall flat afterward. If a university brings in one of the best classes in the country on an annual basis as Harvard has, one should expect them to finish in such a position at NCAA’s. I think that if swimming is a serious parameter of your life, in addition to a great education, their are better options than Harvard. When is the last time Harvard finished in the top 20 or 25 at NCAA’s? I think that speaks volume, some of which is their own institutional… Read more »

Doubt that my son would be an Olympian and a World Champion had he not gone to Harvard – and after all the swimming is said and done he’s got a Harvard degree. ’nuff said.

Well put. I hope all the best to Mr. Murphy and am confident that Kevin will continue to bring success to the Harvard men.

THERE may be better options, not sure that you chose one yourself or else you might know the difference between “their” “there” and “they’re”

Seems like a home run. I’ve heard nothing but great things about Kevin. Certainly has passion for sport at all levels coming from coaching experience in the USVI.

why don’t the ivies consistently score in the top 20 at ncaa’s? it’s simple: no scholarships. how many zero scholarship schools score major points at ncaa’s? that these schools can compete against other big d1 programs for recruits is a testament to the quality of the programs and the universities.

If the Ivies gave scholarships H-Y-P would be in top ten each year and room for a few others in second ten.

No scholarships are huge. See how well Oklahoma State, Michigan, USC and any other top football or basketball program does without scholarships. The Ivies do an amazing job without the money and with the major focus on academics. They are going to school to learn first, play second. Look at their GPA’s and graduation rates. Enough said. Maybe the NCAA could learn something here?