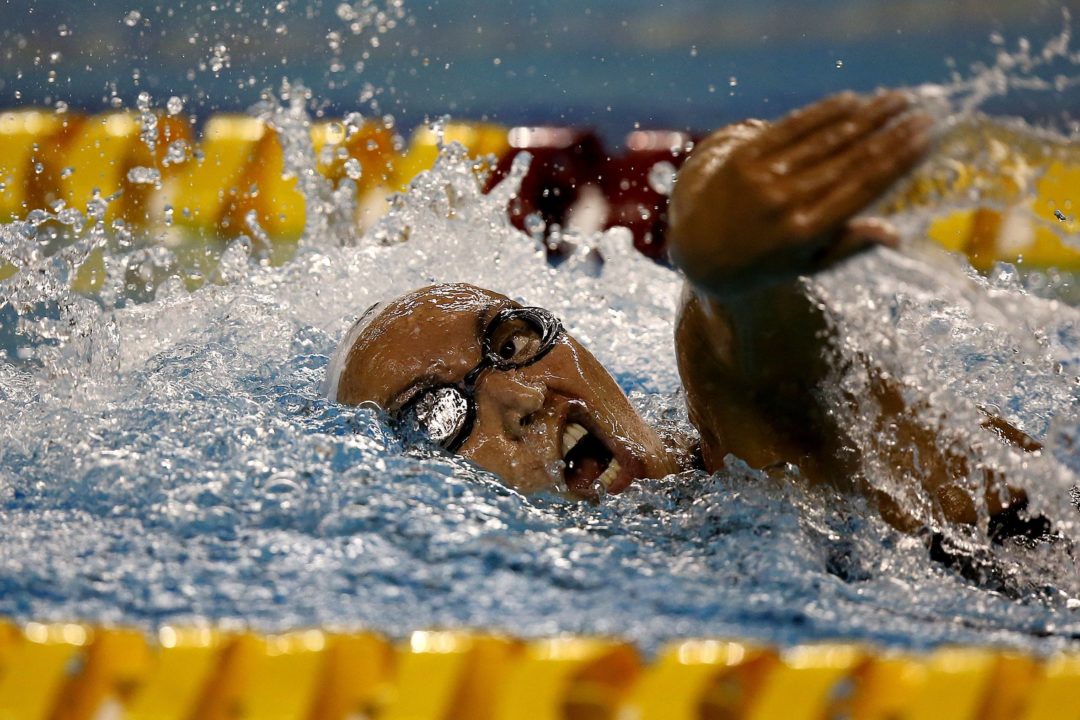 Brazil's Poliana Okimoto crushed the National Record in the women's 1500 free on Monday after not swimming the race at Worlds. (Photo: Satiro Sodre/SSPresse)

But the diminutive Okimoto took advantage of the Jose Finkel Trophy, a post-Worlds long course meet, to test her pool training and with great success.

Though roughly 50 seconds slower than the time with which Katie Ledecky won the world title in Barcelona, Okimoto won the 1500 free at the Jose Finkel Trophy in 16:26.90.

That broke the old National Record of 16:32.18 set by Nayara Ledoux Ribiero back in 2001. Brazil is not well-known for their distance swimmers in the pool on either the men’s or women’s side.

That was the most noteworthy individual swim of the day, though there was some impressive relay splits. Ricardo Machado Oliveira split a 21.14 in the 50 meter free on Corinthians’ 200 free relay (though they finished only 5th as a group). Marcelo Chierighini split 22.69 on a lead-off on Pinheiros’ lead-off relay, and a pair of 22-very-lows from Minas took the day.

In the women’s relay, Graciele Hermann split a 24.41 anchor for GNU as they took 3rd.

Among other winners on the day were:

The most amazing thing in the article “Though roughly 50 seconds slower than the time with which Katie Ledecky won the world title in Barcelona,” 50 SECONDS!! …almost 2 full lengths

Rafael,
probably a relay wonder.A one time thing with some 0.0 RT. do miracles.I remember Cielo spliting a 51.4 in a fly leg with him not even breaking 53 in individual race in the past.Another:Nicolas Oliveira 1.46.99 in 2007 Pan-Ams with him doing only 1.49.4 in individual event.

Doesn’t he swim for Bolles?

SprintDude9000 – yes, that’s who he’s registered with in the USA. Don’t know anything off hand of how much time he spends there versus Brazil, however.

In the photo above, did Okimoto lose a goggle lens? Looks like reflective lens on one side and ?? on the other.