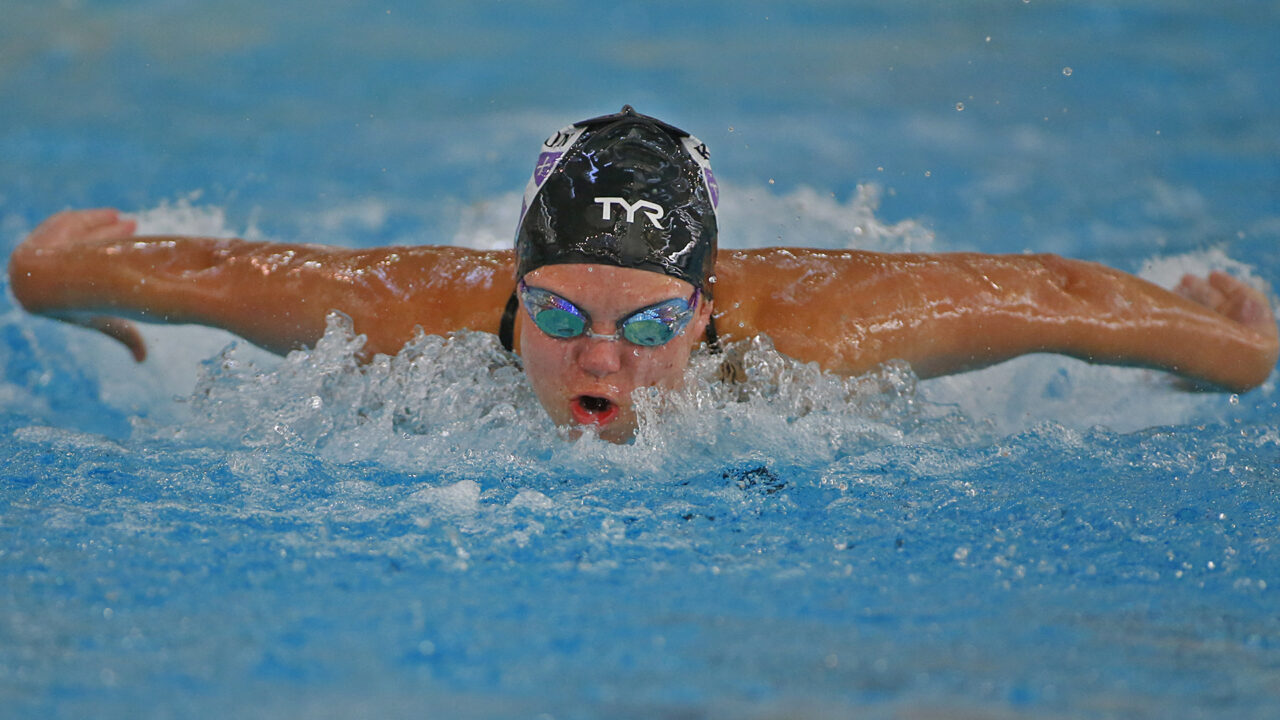 A four-year member of the Kenyon women's team, Mirus helped the Owls capture their 27th NCAC title and their 24th NCAA Division III title in her senior year. Archive photo via Kenyon Athletics

The Pam Smith Award annually recognizes one senior, female student-athlete who distinguished herself throughout her collegiate career in the areas of academic achievement, athletics excellence, service and leadership.

Each NCAC institution was allotted one nomination for the award. Mirus was one of seven outstanding nominees considered by the selection committee and the presentation of her award makes her Kenyon’s eighth Pam Smith Award recipient since the honor was first given in the 2007-08 academic year.

As the recipient of the 2022 Pam Smith Award, Mirus moves forward as one of two NCAC nominees for the NCAA Woman of the Year Award, one of the most prestigious honors the NCAA bestows.

A four-year member of the Kenyon women’s swimming and diving team, Mirus ended her career on a high note, helping the Owls capture their 27th NCAC title and their 24th NCAA Division III title. At the 2022 conference championship, she captured two individual titles and swam on four championship relay squads. On the national stage, she claimed gold in one individual event (100-yard freestyle) and broke three NCAA relay records. Overall, Mirus has a career total of five national event titles, three from relays and two from individual events. She owns 22 career All-America awards and is a nine-time NCAC Championship event title winner.

The 2022 Kenyon senior captain award winner was honored with Kenyon’s Shawn Kelly Memorial Award in both 2019 and 2022 for her inspirational relay contributions; the Stephen E. Bennett Memorial Award in 2022 for most consistently supporting the team in devotion to training and competition; and the Most Inspiring Performance Award after winning the 100-yard freestyle and setting the varsity record in the 50-yard freestyle at the 2022 NCAA Championship. At the conclusion of her senior season, she also earned Kenyon’s Jess Willard Falkenstine Award for leadership and integrity.

This past spring, Mirus was recognized by the College Sports Information Directors of America (CoSIDA) as an Academic All-American for the second time in her career. She is a three-time NCAC Academic Honor Roll honoree, has been named to Kenyon’s Merit List all eight semesters of her career and is a four-time College Swimming Coaches Association of America (CSCAA) All-American Scholar. In May 2022, she was selected as an NCAA Postgraduate Scholarship winner.

Aside from success in the pool and in the classroom, Mirus most recently worked in the Knox County Recorder’s Office as an information audit intern and as a teaching assistant in the Kenyon Language Program. In 2020, she served as a youth worker through AmeriCorps in her hometown of Madison, Wisconsin, planning and coordinating development programming for children during the first spring/summer of the COVID-19 pandemic.

On campus, she served as a community advisor working with the Kenyon Office of Residential Life from 2018-20. In 2019, Mirus served as an undergraduate research scholar with the Madison Education Partnership, translating, transcribing, and analyzing data from qualitative interviews and over 2,000 surveys to assess opportunities for mitigating the impact of socioeconomic status on academic achievement. In 2017, she mentored, tutored and supported a local teenager in the Knox County Juvenile Probation program through the Kenyon Chapter of the National Alliance on Mental Illness (NAMI).

Mirus now advances to the next stage of the process, in which the NCAA Woman of the Year Selection Committee reviews all conference nominees and names the Top 30 honorees, which include 10 women from each division. From the 30 honorees, who will be announced in October, the committee will then use November to select and announce nine finalists, three from each NCAA division. The NCAA Committee on Women’s Athletics will then review the finalists and name the 2022 NCAA Woman of the Year during the 2023 NCAA Convention, which will take place in January in San Antonio.