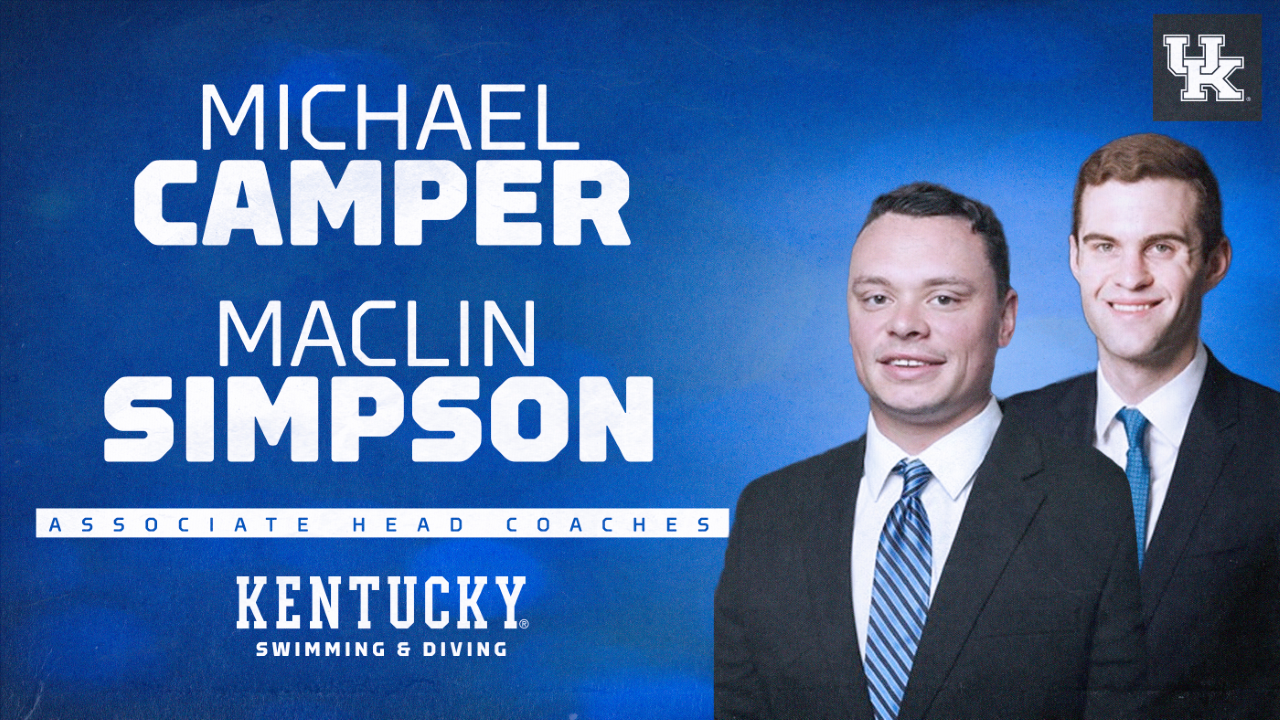 Michael Camper and Maclin Simpson, both of whom served as assistant coaches for Kentucky last season, have been promoted to associate head coaches. Archive photo via Kentucky Athletics

The University of Kentucky has promoted assistant swim coaches Michael Camper and Maclin Simpson to associate head coaches, continuing a shift of their coaching staff this offseason.

Camper and Simpson now move up to become associate head coaches, while program alumni and All-American Bridgette Alexander was promoted from a volunteer job to back-fill as an assistant coach.

Camper enters his 4th season on staff in 2021-2022. Prior to that he worked as an assistant at Pitt for a season and Buffalo for a season. At Buffalo, he worked primarily with the middle-distance and sprint groups, and helped lead the women to their highest MAC finish in program history.

He graduated from NC State in 2015 and worked as a summer league and club coach with the Massad YMCA, Rappahanock Area YMCA Stingrays, Oliv Chapel Otters, and Weatherstone Sharks.

While at NC State, he was a three-year captain as part of the Wolfpack’s rise to one of the top 5 programs in the country.

“Michael has provided great energy and leadership these past few years, and he is passionate about UK and the development of the total student-athlete,” said head coach Lars Jorgensen. “He has been outstanding on the recruiting trail and I look forward to seeing his continued impact on the program.”

Simpson is a former Kentucky swimmer who enters his third season on staff next year. After graduating from Kentucky, Simpson spent 4 years working in the private sector, including as a contributor to SwimSwam, before returning to the deck as a coach at his alma mater.

He served as an assistant coach at Highlander Aquatics in Orlando, Florida in 2015. Simpson swam at Kentucky for 4 seasons under Gary Connelly before swimming his last year of eligibility under current Kentucky head coach Lars Jorgensen in 2013-2014. He was a team captain while at Kentucky.

“Maclin was instrumental in helping us win our first SEC championship. He helped Allison and myself ensure the women’s team was ready to compete at the highest level at both the SEC and NCAA Championships,” said Jorgensen. “He has been an excellent leader, a hard worker, and a great coach who is well deserving of the promotion.”

While associate head coaching duties do indicate elevated responsibility, it more importantly comes with a raise. While terms of the new contracts have not yet been released, last season Simpson earned a base salary of $49,000 while Camper had a base salary of $61,000. Both earned substantial bonuses because of the team’s success: they each received $7,500 rewards for the women’s team’s SEC Championships, plus an additional $5,000 bonus for the women’s team finishing in the Top 25 at NCAAs.

Reed Leather, meanwhile, had a base salary of $76,500 last season, with the same bonuses.

I know someone who is a happy camper today.

Michael Camper is a very knowledgeable and well experienced coach. He is very deserving of this promotion and more! I hope he gets the chance to become a head coach and run a team of his own sometime soon. Maclin Simpson not so much