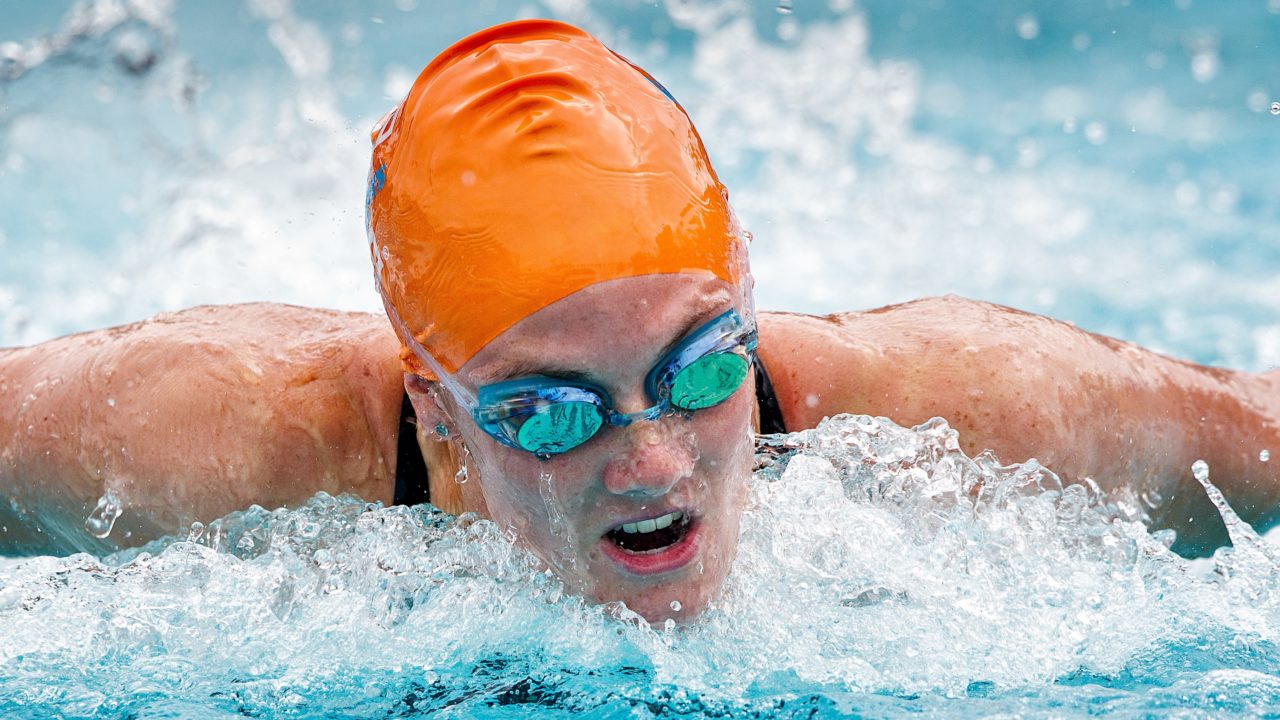 The U.S. Open is already breezing through at a solid clip for spectators in Indianapolis; with fewer than 50 swimmers in each event, and no semi-finals, this meet is a breeze of a championship for swim fans.

Kelsey Floyd continued her red-hot summer by winning her first-ever National Championship. She took the women’s 200 fly in 2:08.74; that’s even faster than her 4th-place performance at the Olympic Trials and moves her into the world’s top-20 in 2012. With that swim, Floyd should lock up her spot both on the National Team and the World University Games squad.

Floyd used an electric closing 50 meters of 32.98 to make up a full-second over Jasmine Tosky from Palo Alto-Stanford Aquatics. Tosky had to been disappointed not to make the Olympic Team after swimming at last year’s World Championships, but she persevered to a 2:08.91 lifetime best for 2nd. Kim Vandenberg was 3rd in 2:10.93.

Other notable swims include former USC Trojan Lyndsay DePaul. She didn’t have a great prelims swim, but won the C-Final in 2:11.38.

Much like the women, in the men’s 200 fly we saw several swimmers improve their times from the Olympic Trials. Thomas Luchsinger took the top spot in 2:07.51; that’s not quite as fast as he was in 2011, but should be a great springboard toward his senior season at North Carolina. In 2nd was South Carolina’s Michael Flach in 1:58.40; he chose this 200 fly over the freestyle races at the Olympic Trials, and continues to look outstanding in the event. He was right on target with his Olympic Trials swims, so we’ll get a pretty good idea of what he left behind in the 200 and 400 freestyles.

Britain’s Iain McMillan took 3rd in 1:58.72, followed by Michigan’s Kyle Whitaker in 1:58.95. For Whitaker, that swim is his personal best in a textile suit.

After slow-playing the prelims, Georgia’s Megan Romano exploded in the finals with a 53.92 to win the U.S. Open title and set a new Meet Record. This is the swim she was waiting for, but missed at the Olympic Trials; after swimming a huge lifetime best on the first day of June, she was only a 54-high in Omaha. Now her times are back in the right direction, and she’s the third-fastest American in the event this year.

T2’s Erika Erndl was a hair better than her prelims swim with a 54.79 for 2nd. That’s better (though not by much) than she was at Trials as well. Romano turned about half-a-body length ahead of her competitor, but exploded off of that wall to a big win.

Canada’s Sandrine Mainville took 3rd in 55.48, close to her best time. Australian 13-year old Shayna Jack swam another lifetime best of 55.54 for 4th as she closes in on Yolane Kukla’s 13 & under Australian Record. She stands as the 2nd-fastest swimmer in the history of that age group down under.

Cal teammates Catherine Breed (55.62) and Liv Jensen (55.66) were 5th and 6th, ahead of future Cal Bear Rachael Acker in 55.89. Last year’s 50 free NCAA Champion Jensen has exhausted her college eligibility, leaving a big relay hole, but with those outstanding swims by Breed and Acker, the group still seems to be in great shape.

France’s Mehdy Metella might be finally coming out of the sprint shadows. With big turnover expected in the French sprint group before 2016, the 20-year old Metella is poised to grab a spot among the elite. He was 8th at the French Olympic Trials in March, and just missed his best time here by .01 to take the win in 49.18.

His path to improvement is clear: he needs to be stronger, quicker off of the blocks, and swim a faster first 50 meters. He was out in only a 23.9 here (though back in a very good 25.2), and even that was an improved first 50 from French Nationals where he nearly even-split the race. He almost resembles a young James Magnussen in this race – like Magnussen, he likes to swim a big back-half on this race, and also has very long, loping strokes. If he can find the front-half that Magnussen did in this race, he could be a star.

In this final, he had a matchup with Australia’s Kenneth To that was reminiscent of the final of the 2010 Youth Olympics. In Singapore, Metella got the better of To on a big back-half. Here, in Indy, the story was much the same, as To finished well-in front but had to hold on for 2nd in 49.35.

International swimmers swept the podium, with another Aussie Matthew Abood touching 3rd in 49.77. Despite a great effort, Auburn’s Kyle Owens couldn’t run him down and finished .01 behind in 49.78.

Kentucky’s Tyler Reed was the 2nd-best American, taking 5th in 50.18, followed by Michigan’s Michael Wynalda  in 50.29. Owens and Reed will earn invites to the WUG’s with those swims.

After breaking the NCAA record of the great Janet Evans, she’s no knocked-off Evans’ Meet Record in the 800 free, the longest event on the Olympic schedule, with an 8:24.36. Had she swum that time at Trials (she wasn’t even close with an 8:30), it would have easily put her in 3rd place. Just as we saw Katie Ledecky explode at the Olympics, we may be seeing the development of another future all-world distance swimmer for the Americans.

Ashley Steenvoorden was 2nd in 8:33.41, followed by open water swimmer Ashley Twichell in 8:34.56 (a lifetime best in the pool). As we approach the beginning of the college season, not that Texas A&M redshirt sophomore Sarah Henry was a best time for 4th in 8:38.46. After injury cost her last season, she’s been outstanding in her comeback, and has now dropped another two seconds from her lifetime best.