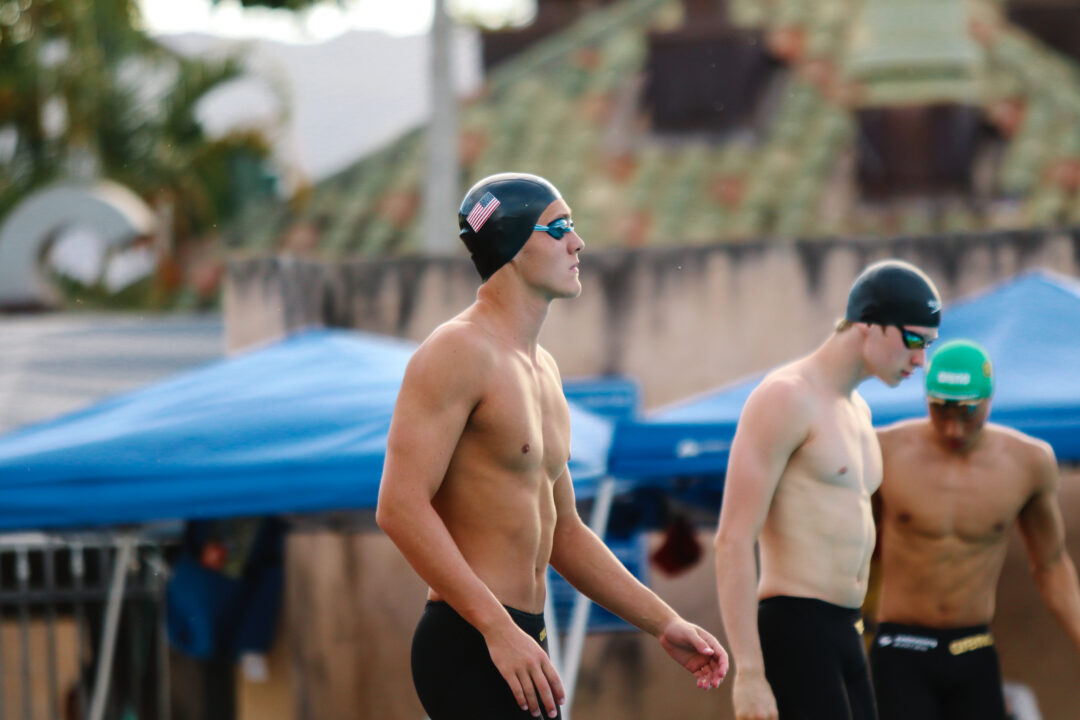 Keaton Jones capped his high school career with a 1:35.72 in the 200 free state final, toppling a 12-year-old state record in the process. Archive photo via Jon Reiter

Gilbert Higley senior Keaton Jones capped off his high school swimming career with a 1:35.72 in the 200-yard freestyle that earned him the title at the Arizona Interscholastic Association (AIA) Division I state finals on Saturday while also breaking multiple records in the process.

Jones shaved more than half a second off the previous state record of 1:36.33 set by Tyler Messerschmidt in 2010. He also reset Darian Townsend’s previous facility record of 1:36.27 from 2014 en route to Division I swimmer of the meet honors.

Jones, a 6-foot-5 Cal commit who’s ranked as the No. 6 recruit in his class, triumphed in his only other individual event: the 100 backstroke. His time of 48.28 just missed taking down Alex Righi’s 18-year-old state record of 48.00, but Jones did come away with another facility record by shattering the previous mark of 50.09 swam by Alex Schultz in 2012.

“It’s a good swim for where I’m at right now in the season,” said Jones, a recent Junior Pan Pacs medalist in the 200-meter back. “It’s four weeks before Juniors and that’s like three tenths off my best. I’m in a good spot. I’ve got four weeks to dial things in.”

One of Jones’ club teammates on Swim Neptune also had a huge meet. Chandler Hamilton senior Ian Pickles claimed the 100 free (45.45) after breaking his ankle and having his cast removed before last year’s state meet. He also placed second in the 50 free (20.68) behind Scottsdale Chaparral senior Tristan Dalbey (20.63), a Harvard commit.

“(Pickles) put in the work for the entire year and he turned out to be a champion,” Chandler Hamilton coach Mike Peterson told the Arizona Republic.

Chaparral had plenty of other reasons to celebrate, though, as the school became the first at the Division I level to win both the boys and girls state championships. The Firebirds cruised to team victories by more than 100 points on the boys side and less than 50 on the girls side.

The victory marked redemption for the Chaparral boys, who lost to Desert Vista by just two points last year. For the girls, the win extended their dynasty to nine state titles in a row.

“I’m absolutely proud of these girls,” Chaparral coach Russell Krzyzanowski told the Arizona Republic. “We did our job as a group. We had a mission since we got in the pool in August. That was a big one for our ladies.

“Our boys, we were looking for redemption after last season,” Kryzanowski added. “Our boys had a goal in the beginning and they were absolutely dominant.”

Mesa Red Mountain junior Sophia Jahn was recognized as the Division I girls swimmer of the meet after sweeping the 50 free (23.13) and the 100 fly (54.33). She brought home a third state title as a member of Mesa Red Mountain’s victorious 200 free relay team.

“I feel amazing,” Jahn told the Arizona Republic. “The 50 free, I would have liked to have gone faster. But the 100 fly was actually a shocker.”

There’s some serious talent in the sophomore class as second-year Gilbert swimmer Lorin Tobler won the 100 back (56.65) and placed second in the 100 fly (55.34) behind Jahn.

The Goodyear Millennium boys couldn’t claim any individual state champions, but they still brought home the Division II team title thanks to their depth. Millennium scored points in every event and had three divers score points, edging Scottsdale Desert Mountain by a slim margin, 336.50 to 329.

Millennium senior Alexander Burton earned a runner-up finish in the 1-meter diving finals, and junior Bartek Bednarz placed second in both the 100 free (46.88) and 100 breast (59.83). Junior Landon Suaverdez also posted a top-three performance with his third-place showing in the 100 back (52.86).

Desert Mountain beat Millennium by five seconds in the final event of the day, the 400 free relay, but it wasn’t quite enough to erase the deficit. On the girls side, though, Desert Mountain took home the title with 389.5 points over Gilbert Campo Verde’s 350.

The Desert Mountain girls relied on a trio of sophomores to carry them to the Division II crown. Juliette Daigneault delivered a win in the 200 free with a time of 1:54.73, Emerson Therrien clinched a state title in the 100 fly with a 55.88, and Ellie Horning picked up another first-place finish in the 100 back with a 55.88. Daigneault also placed second in the 500 free just .11 seconds behind Saguaro junior Emily Sheldon’s 5:04.44.

Chandler Arizona College Prep took home the boys and girls team titles for Division III. The Arizona College Prep (ACP) girls were led by sophomore Nicole Byrnes Cortinas, who earned first-place finishes in the 200 IM (2:09.22) and 100 breast (1:06.01). They cruised to a 36-point victory over second-place finisher Phoenix Country Day as freshman Saylor Debnam added an individual title in the 100 fly (58.76).

Echoing the Division II result, the ACP boys used their depth to deliver the win as they clinched the team crown with no individual champions on their roster. Sedona Red Rock senior Carlos Lattanzi won the 200 IM in 1:51.86, but he was unable to defend his state title in the 500 free after a controversial entry error.

Good catch to note that the 100 Back record Keaton was just short of was Righi’s 18 year old mark of :48.00. When that was done 18 years ago, it was good enough to make Alex the National High School Male Swimmer of the year. Alex went on to be a sub 19 second sprinter at Yale.

Regarding the D2 recap – pretty sure Junior Gabrielle Primiano led the Desert Mountain ladies to their 3rd consecutive title by winning both the 200IM & 100 breaststroke. She was awarded “D2 Women’s Swimmer of the Year” by the AIA for those performances. Pretty cool feat for her, the team, Coach Crystal Strimple, and DM Swimming. Would love to see what the Wolves can do in D1!

The article states: Chaparral had plenty of other reasons to celebrate, though, as the school became the first at the Division I level to win both the boys and girls state championships.
Dobson High did it back in 1987. Fun fact…

I thought the same!!

I did too!! Especially when I saw the picture of Mr. Jones!