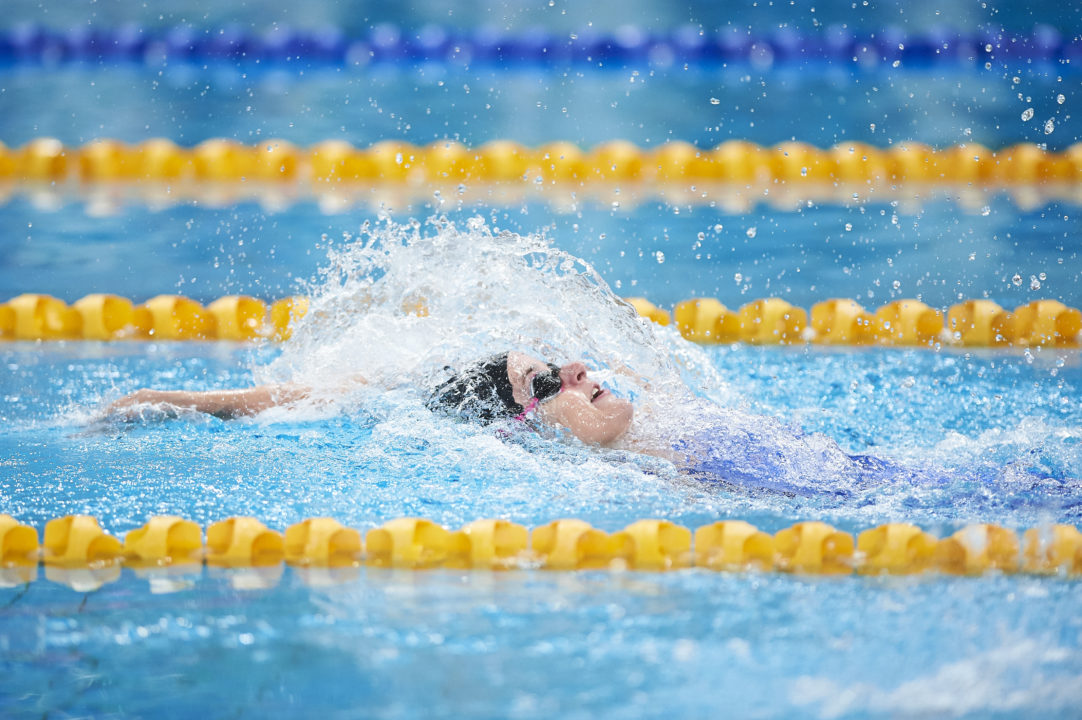 Today in Brisbane,  the USC Spartan entered entirely new territory with a super speedy 58.11. That time overtook Emily Seebohm‘s long-standing national record of 58.23 she put on the books in the heat of the 2012 Olympic Games in London. She wound up taking silver to American Missy Franklin in 58.68.

As for McKeown, her fastest 100m back entering this Medal Shots meet was represented by the 58.52 she posted in January of this year. As such, her 58.11 here knocked .41 off of that previous PB to write her name into the history books as the fastest Australian female of all-time.

Splits for McKeown’s monster 58.11 included 28.70/29.41 to give her the new record. Her time would have taken the gold at last year’s World Championships, crushing Kylie Masse‘s 58.60 in Gwangju.

She now rockets herself up the list of all-time performers to become #4 only behind WR holder Regan Smith, Kathleen Baker, both of U.S. and Kylie Masse of Canada.

Wow. This has been one of the fastest, most packed weekends in swimming. Backstrokers really catching fire 👀

is that the third fastest time ever ?

Awesome time! I was interested to see the times in other events but when I clicked the Results link I only got the junior events. When I went to the Queensland Swimming site I couldn’t find the results anywhere. I have to say the sites of all the Australian swimming bodies all have the same design and are pretty poor.

Nope that event now data logged out . It’s only a time trials .

Were you watching live? Cos I don’t see the live results yet.

I wish SQ would post videos somewhere but then I guess they want people to pay for the stream.

Speedo australia instagram stories has a tiny bit of the race. So happy for her.

Amazing… Bit of a medley relay game changer as well. Who’s the Aussies best Breaststroker? If they can just stay ‘close’ to the US after the back/brst legs…

There is some young swimmers I’ve seen who I think really have a lot of talent and have been out of racing for a while, so it is hard to guess where they are at. And women’s breaststroke has a history of girls coming out of nowhere and doing really well.

Probably going to need someone in the 1:04-high range to keep in the mix though with Curzan and Manuel bringing it home (and that is assuming McKeown, McKeon and Campbell are perfect) which doesn’t seem particularly likely.

Agreed not likely. I just wish to see the Aussies and Canadians ‘make it interesting’ by being in the mix after back/brst instead of shows over after Smith/King. Kelsey Wogs brst improvement hopefully does just that in what was Canada’s weak leg. To see MacNeil + Ruck/Oleksiak and McKean+Campbell put pressure on Dalia/Curzon +Manuel will be fun.

This is actually really scary. The 100m back and the 200m breastroke are gaining more depth with each meet hosted. I am looking forward to the 100m back at trials and at Tokyo.

Just realized Regan could have won that in gwangju by over a second. I can blame the us qualification system now

Smith may have a challenger here – This is bloody impressive.

She did a 400IM at Worlds a while back. The girl is tough as old boots – Nothing fragile about her at all.

That 400 was a PB and 1s negative split and was before her 100 back in the schedule.

Ties Gemma Spoffort I think – She was back in 29.41 when she set her WR suited