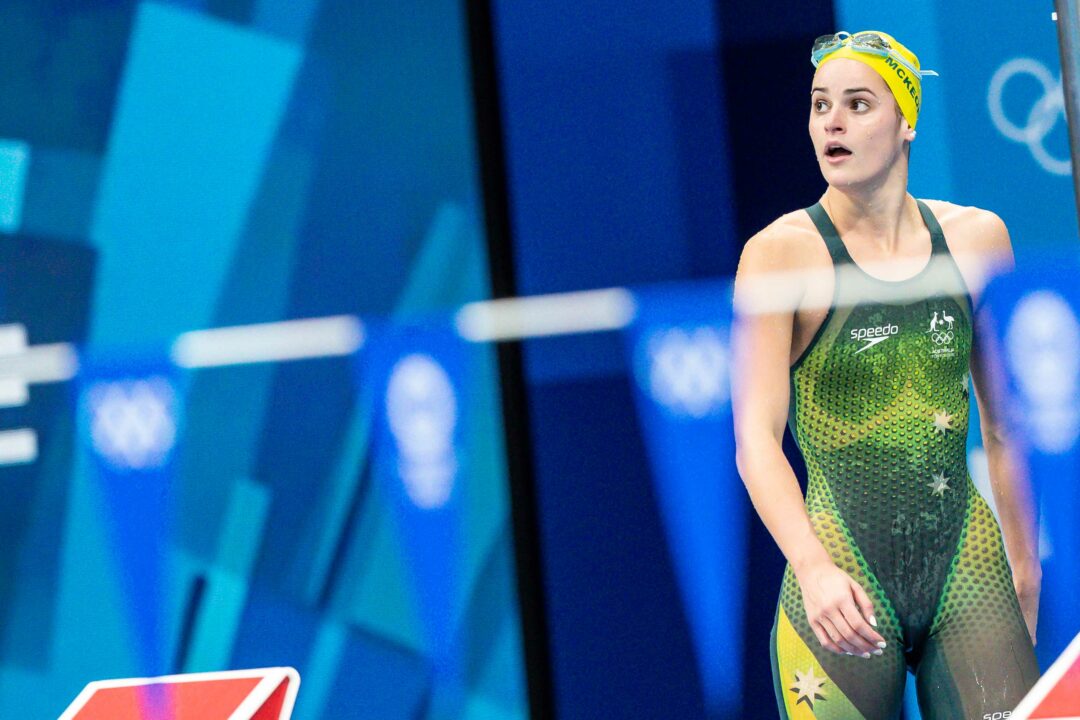 McKeown's time of 4:31.74 sits just behind Summer McIntosh's 4:29.12 from March 2022, which is the top time in the world this season. Archive photo via Jack Spitser/Spitser Photography

On night two of Australian trials, Kaylee McKeown lit up the pool with a 4:31.74 400 IM to win the race by over five seconds. Her time is a new personal best, and is the second-fastest in the world this year, just behind 15-year-old Canadian phenom Summer McIntosh‘s 4:29.12 from March this year.

With McIntosh and McKeown’s performances, there are now two different swimmers this year who have gone faster than Yui Ohashi‘s time of 4:32.08 to win Olympic gold in 2021.

At the 100 mark, McKeown was actually sitting in sixth place after the fly leg. Although she took the lead in the backstroke portion of the race, her best stroke, it was actually the breaststroke leg in which she dominated the race. This is a contrast from how McIntosh paced her race, where she opened with a very strong butterfly leg.

Since McIntosh and McKeown are both from Commonwealth countries, they will be primed for a showdown in at least the Commonwealth Games and potentially Worlds.

Take a look at their splits compared to each other:

Last season, McKeown swam a time of 4:32.73 in December 2020, but did not swim the 400 IM at Olympic trials. Her time ended up being fast enough to win Olympic silver in Tokyo.

will kaylee be at world champs?

She said it was a maybe but she will definitely be swimming it at Commonwealth Games.

Only to get clowned on by summer

Kaylee only went 1:08 on the back. She has more in the tank. Summer is amazing but write Kaylee off at own peril.

Yet another case for why the number of events in swimming should be reduced. Way too much crossover between events – just overburdening the same few stars with a redundant workload. For example, in track, at best a sprinter might have some crossover in the hurdles or long jump, but even then it’s very difficult to medal in both. There is no need for swimming to have so many events.

No, just cut out the time wasting, schedule-clogging expenditure of effort called semi finals. Top 8 to finals, everyone else to watch from the sidelines is cut-throat but worked well enough in the 80s-90s. The reality is that only 1 medal winner from Tokyo came from outside the top 8 qualifiers from heats and only 1-2 finalists per event.

I think they could drop them for the 200s, though.

Would be happy with them going for 200’s as a start but the question remains …. what constructive purpose do they stand, especially with the increased number of events since they were brought back ??
A “second throw of the dice” which statistics should bear out that does NOT play out with a positive outcome for most swimmers in the 9-16 bracket from heats.

If people complain about why swimmers don’t swim fuller programs at major events; then taking this step would be a significant positive step.

I don’t get why people complain about people not swimming fuller programs, or single athletes winning too many medals and such nonsense. Who cares. International Semis are fast, i like fast swimming.

I broadly agree. The crossovers are most apparent in the 400/800/1500FS, 100/200BS, 200/400IM. The best swimmers have to pick and choose their events because of the proliferation. But once events are added it’s amost impossible to reduce the program. I didn’t see the need to introduce another freestyle event for Tokyo(the 800 for men and the 1500 for women) or the mixed medley relay. As for the 50 metre form stroke events, there’s a place for them but not at the World championships(but we’re stuck with them) and certainly not at the Olympics.

I would go ahead and consider Kaylee the favorite going into Commonwealths because we haven’t even seen the 4:29 in person nor was it ratified, and she hasn’t swum that since. Also, I think Kaylee is gonna drop more.

“She hasn’t swum that since” is the stupidest comment on this site in ages.

Oh, I’m so sorry that she hasn’t gone faster than the 3rd fastest time ever in the last 2 months.

Yes because Canadians have an extensive history of fudging times that are world class at lower radar meets…. 🤫

Summer McIntosh may just get the WR here. She needs someone like Kaylee to push her. It’s so perfect I could cry – with joy.

I think Kaylee is capable of winning. No way she splits 1:08 on the back at comm games.

speaking of that 4:29 anyway, is there no recorded video of it? obviously I believe it happened but I really wanna watch that race

If it had happened in Hungary I might have been suspicious(remember the phantom meet in order to get qualifying times?) but it’s far-fetched to say the Canadians fudged it.

Summer is still the favorite but Kaylee is a worry

Makes it seems obvious that Kaylee could go at LEAST a 2:24 200 breast, which is a very elite time itself.

She’s a 1:07 100 breaststroker, and that was from a random meet in December 2020. Swam a 54.4 100 free that same meet as well. Her range in other strokes is actually super impressive, we just don’t get to see it very often because she focuses so much on backstroke and now IM

I think she’s been quoted as saying her freestyle is hopeless.