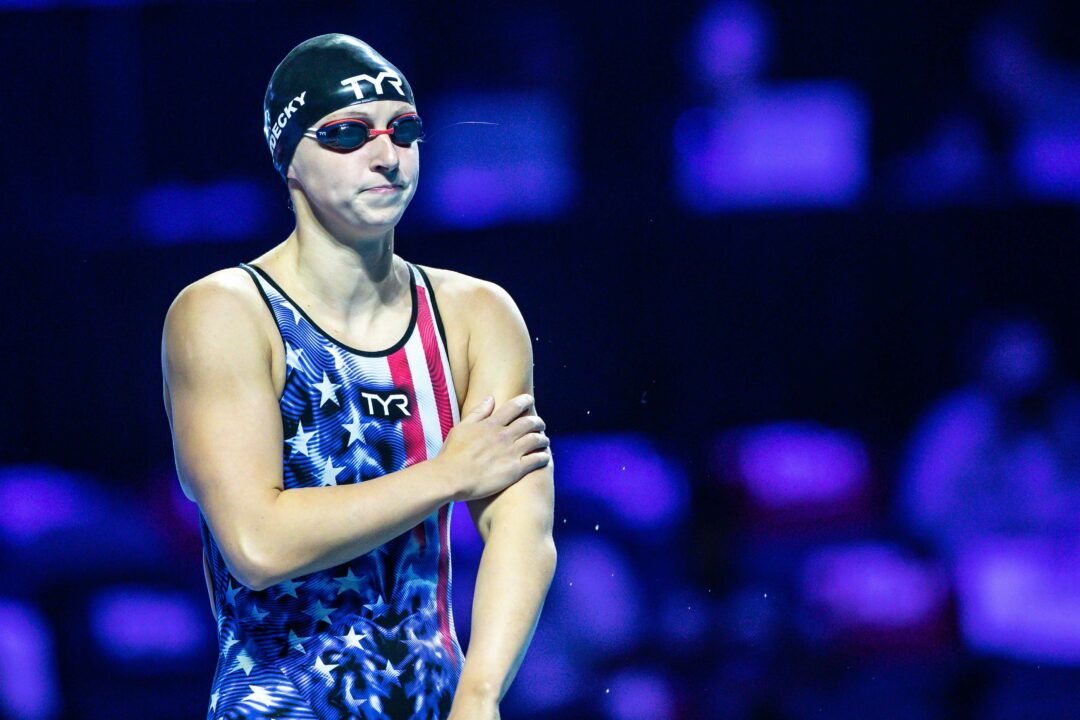 Katie Ledecky has now swam two of her events at this meet faster than her Tokyo times, and went her fastest final 50 in the 200 free since 2014. Archive photo via Jack Spitser/Spitser Photography

Katie Ledecky was on a roll for the second night in a row at the 2022 Southern Zone South Sectional Championships, swimming a 1:54.66 to win the 200 freestyle, which was faster than the 1:55.21 she swam at the Tokyo Olympics last summer to finish 5th. The time is her seventh-fastest swim in the event, and the fastest she has been since the April 2021 TYR Pro Swim Series in Mission Viejo, when she went 1:54.40.

Ledecky’s time at sectionals in the 200 freestyle would have won the bronze medal at the 2021 Olympics, ahead of actual bronze medal winner Penny Oleksiak (1:54.70). In addition, her time from Friday is also 0.26 seconds off of the U.S. Open Record of 1:54.40 shared by her and Allison Schmitt. Ledecky’s best time is a 1:53.73 from the Rio 2016 Olympics, en-route to taking gold.

In Ledecky’s Rio and Tokyo swims, her splits got increasingly slower, which is how she has paced the majority of her 200 races.

Ledecky negative split her 800 free on Thursday in a time of 8:11.83 (4:05.98/4:05.85), which was also faster than she was in Tokyo to win gold. Her recent performances indicate that training at the University of Florida has improved her closing speed, which is similar to the way that her new training partner Bobby Finke closed his races in Tokyo.

Ledecky switched her training base from Stanford to Florida last fall, and is training under Anthony Nesty in Florida with a star-studded group of Olympic medalists including Finke, Caeleb Dressel, Natalie Hinds, and Kieran Smith.

Her splits were as follows:

Great to see Natalie Hinds swimming great as well. COM in the house!

Love to see her swimming fast but there isn’t any “redemption” showdown til 2024….

Yeah, ask Carson Foster if he feels “redeemed” in the 400 IM.

That’s not how “redemption” work.

This prediction from Swimfan was of course on point as always.

Y’all never learn, she does this every year. She swims fast early and then falls off late. One day y’all will stop overreacting to these swims from her

Great to see, but a little sad to think she could’ve been faster then with a different coach. You gotta change things up sometimes but it is often hard to see that in the moment.

I think it is more due to Covid interruptions in training than coaching.

EVERYONE has Covid interruptions in training, my dude

She would have tied for 5th on the men’s side, which is kind of crazy in a 200. I realize this is not super elite competition, but the guys aren’t exactly slow.