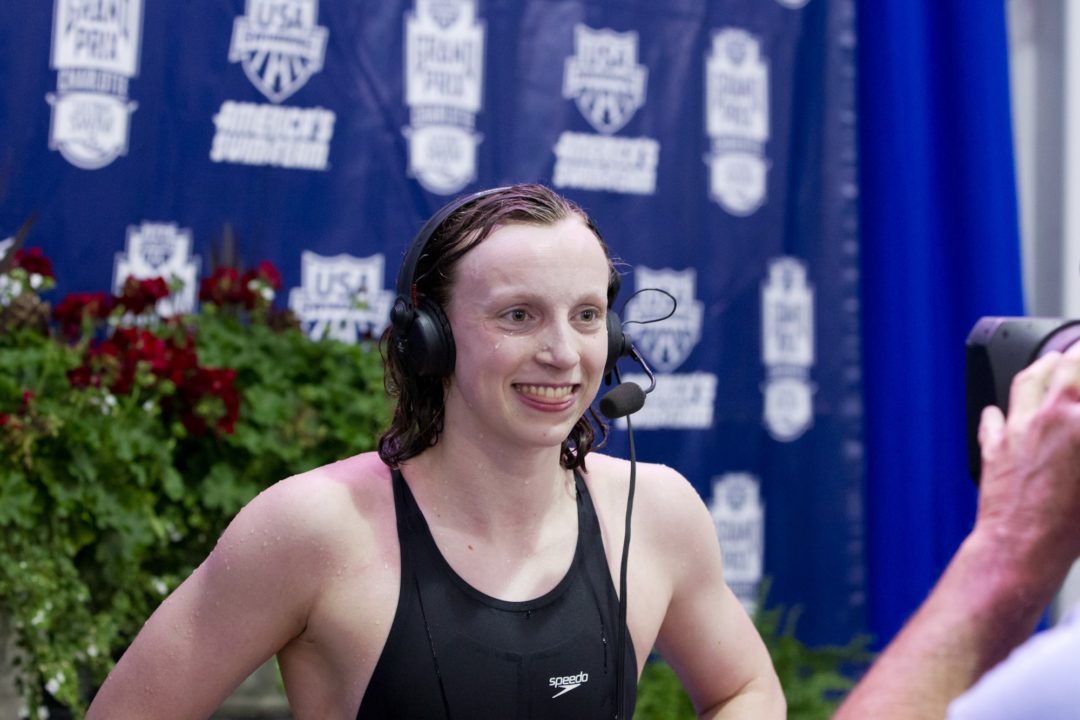 Katie Ledecky (above) and Jack Conger won't have any surprise entries at this weeken'ds Metro Championships. (Photo Courtesy: ©Tim Binning/TheSwimPictures.com)

Katie Ledecky and Jack Conger both swim at Washington D.C.-area private schools, meaning that the eschew the Maryland State Championship meet in favor of the D.C. Metro Champs – which ultimately becomes a top-tier high school championship meet even without state sponsorship.

Unlike what we saw when the Colorado psych sheets (see: Missy Franklin) were revealed earlier this evening, Katie Ledecky from Stone Ridge and Jack Conger from Good Counsel High School will both be swimming primary events at their championship meet.

Ledecky’s entries will be the 200 and the 500 yard freestyles: the closest races to the 800 meter free where she won Olympic gold in London. The records she will be chasing will include Missy Franklin’s 200 free Independent High School National Record, as Franklin won’t be swimming the event this weekend; Ledecky and Franklin will be going after the same record in the 500 free. While we know that Franklin won’t be shaved and tapered as she focuses on World Championship Trials, we don’t have much information on what Ledecky’s strategy will be for her championship meet.

Conger, meanwhile, has a different definition of “primary event.” He’s shown that he’s an absolute stud in just about every event on the high school schedule, almost equally in yards. Two events have clearly emerged as the clear targets, though, and those are the two he’ll swim: the 100 back and the 500 free.

In the 100 backstroke, at Winter Nationals, he broke Ryan Murphy’s 17-18 National Age Group Record in the 100 back with a 45.32 – a time that was also better than Murphy’s high school record. That time didn’t count for the scholastic record books, however, as it was done at a USA Swimming meet. So, Conger will be wanting to write another page in these twos’ back-and-forth rivalry with a new record. It’s scary to think about – but maybe even a 44 is in the stars.

Then he’ll swim the 500, an event that emerged as a strength for him at this same meet last year (where he didn’t swim the 100 back). He put up a 4:17.51 at that meet that shocked everyone, broke the Independent High School national record, and rattled the cage of the most legendary record left in NISCA’s papers: Jeff Kostoff’s 4:16.39 from 1983. That’s one of only two records, public, private or otherwise, from before 2006; and the only older than 1998. If Conger were able to get that record, he would be able to stake a serious claim as the greatest male high school swimmer ever.

No relay entries are out yet, but Conger’s best chance at a relay leadoff record would be to swim on Good Counsel’s 200 free relay and lead-off with an eye at Murphy’s other record, a 19.54 in the 50 free (independent) or Vlad Morozov’s 19.43 overall record.

Don’t forget to vote in our poll of the week:

This may not be the article to comment this but why is there such a difference between high school swimming in different states? For example, states like Florida have a districts, regionals, states format each a week a part where swimmers must advance to each meet. Hence, they only have the opportunity swim their two events plus relays. Meanwhile, New York seems to have meets on 3 consecutive weekends, yet their swimmers get to swim different events at each meet, because their state meet is based off qualifying times (Ex: Jack Conger in the 50 and IM last weekend, but the 500 and 100 back this weekend). In addition, many states like Pennsylvania swim States separated into two days while… Read more »

There should be a national high school championship. Top swimmer in each event from each state both private school and public school combined. So 50 swimmers per event. Prelims finals. Mid-country location.

And of course there’s California, which swims in the spring and doesn’t even have a state championship meet!

That’s a good point, in Hawaii it’s set with time standards so they only have to taper for state assuming that made the very easy time cuts, but here in texas with district, regionals, and state at two week intervals, we end up in taper mode for a month or more at times, especially with sectionals just a week after state. Being able to zero in on one meet instead of spliting your energy has to give a slight advantage, but then again Feigen seemed to do quite alright so it’s whatever

Every state makes it’s own decision as the National Federstion sets some rules but it is a Federationso but has no jurisdiction in each state. You would be amazed and how much difference there is in getting to states to have a State meet or Meets for size and scored to decide the champion as 49 states do.
Of course you could go to NewJersey that decides their champion team by a dual meet playoff with A and B and Public and Private separate with an individual meet for all teams with standards Ind and Relays with no score kept. This way in the dual meets the top swimmers are not usually tested and at the big meet some… Read more »