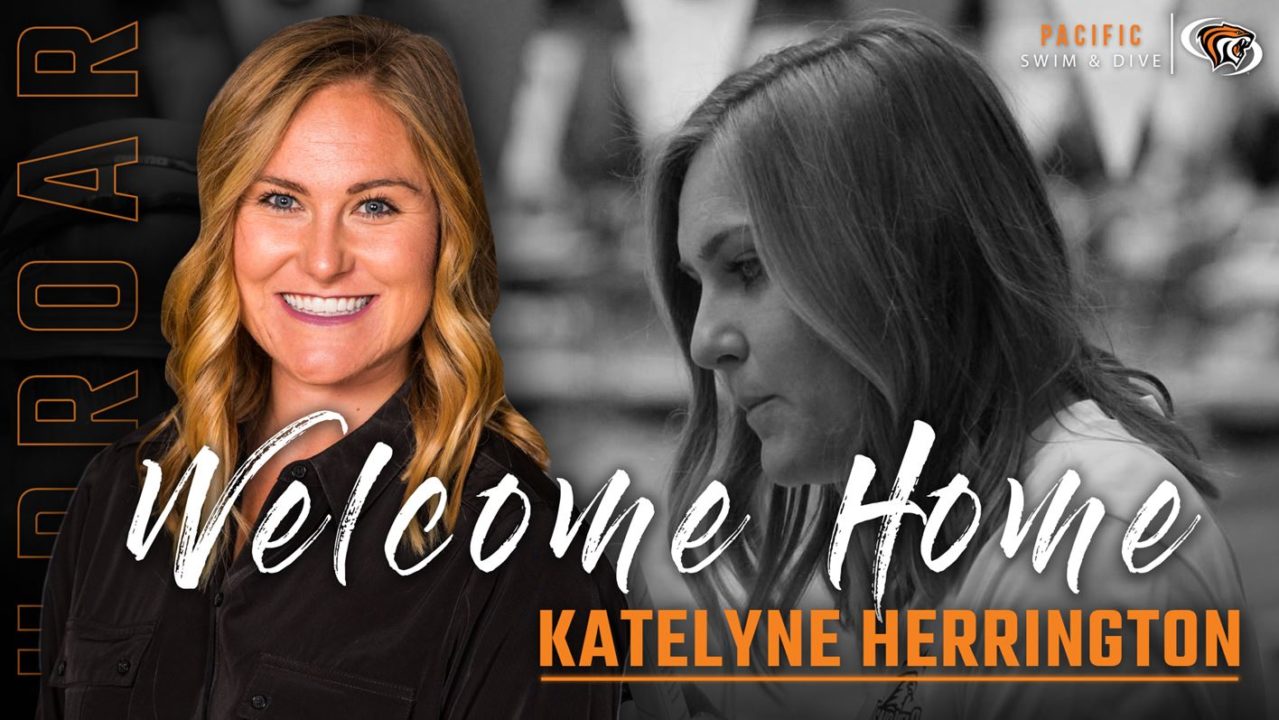 Former assistant coach Katelyne Herrington has been brought back to University of the Pacific to head the women's and men's swimming and diving teams.

The University of the Pacific has announced the hiring of Katelyne Herrington as the head coach of men’s and women’s swimming and diving. Herrington will fill the position left vacant by head coach Peter Richardson when he resigned in June to take the associate head coaching job at Arizona.

“It is my distinct pleasure to welcome Coach Herrington back to the University of the Pacific and the Stockton community as our new Head Swimming and Diving Coach,” Director of Athletics Janet Lucas stated. “Katelyne is a talented professional with a successful history of supporting the growth and development of student-athletes. She brings a strong vision for the men’s and women’s swim teams, the ability to establish a competitive atmosphere, and a focus on establishing a habit of excellence in academics, in swimming, and in life.”

Herrington worked as an assistant coach at Pacific under Richardson during the 2016-17 and 2017-18 seasons. She was involved in all aspects of running the program, from coaching and recruiting to compliance and fundraising. She helped coach the Tigers to 40 school records during that period, qualified a swimmer for NCAA Division I Championships in both seasons, and had a 200 free relay that was ranked in the top-10 during the regular season in 2017-18.

Herrington served as the director of operations for the swimming and diving program at University of New Mexico in 2015-16 and was also an age group coach. She was an assistant coach at her alma mater, UNLV, in 2014-15.

No stranger to University of the Pacific, Herrington grew up in Stockton and her father played football for the Tigers in the 1980s. Herrington spent her collegiate swimming career at the University of Nevada, Las Vegas from 2010-14, where she was a two-time NCAA Division I All-American and a two-time Mountain West Conference record-holder. Her 100 fly conference and championship record of 51.48 still stands today. Herrington was a team captain, a scholar-athlete and a four-time Academic All-Conference honoree. She received her Bachelor of Science in hotel administration from UNLV in 2014 and is currently working towards a master’s degree in Health and Exercise Sports Science at Pacific.

“The opportunity to lead a program in the community I grew up in, where I was a former assistant coach, as well as where my father went to school and played football in the mid 80’s, is truly special,” quoted Herrington. “I am beyond honored to bring my passion for the sport, loyalty to my home community, as well as the pride I hold for University of the Pacific. I am beyond excited to work together with the student – athletes, as well as the coaches, administrators, and supporters of Pacific Tigers.

“I look forward to continuing to build the vision of excellence for the future of the Pacific Swimming and Diving program,” said Herrington. “I’m ready, let’s go get em’ Tigers!”