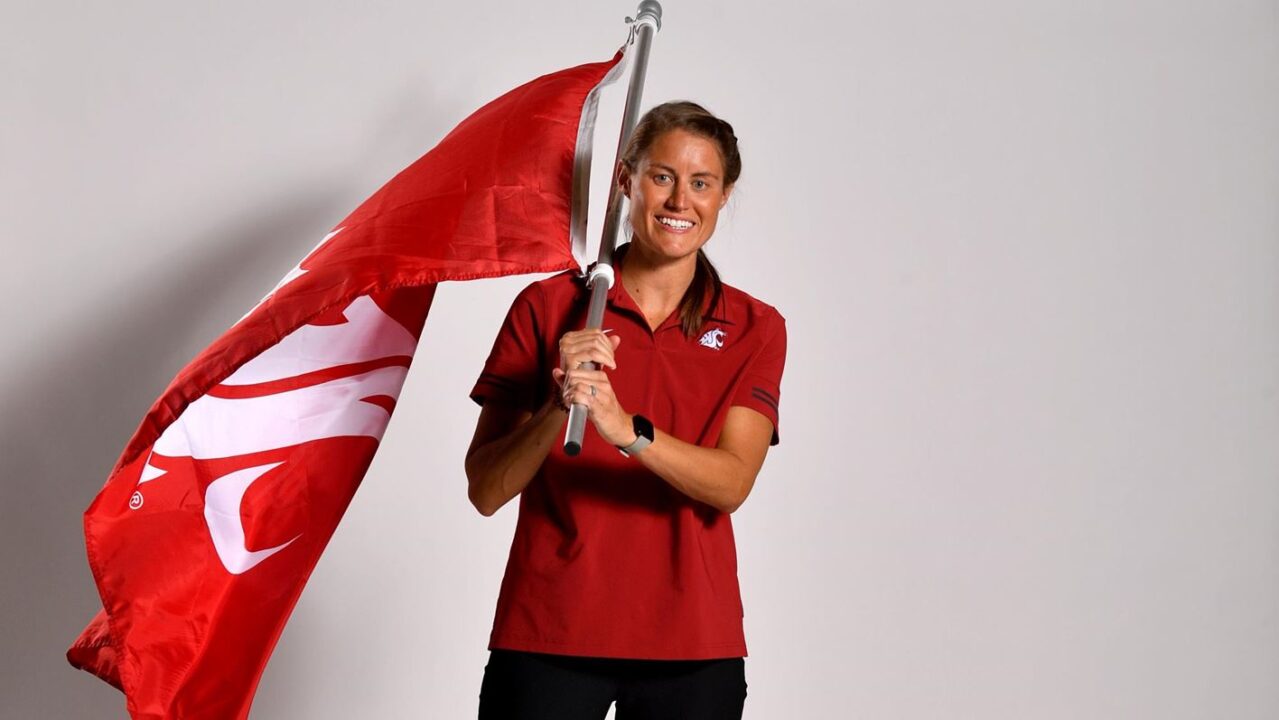 Moore has worked as an assistant coach for the last two seasons with the Cougars. Current photo via Dean Hare / WSU Cougars

“I am honored and humbled to be able to work alongside such an amazing person, coach and team player in Coach Kate Moore. Kate brings excitement, knowledge and a focused recruiting expertise to help grow this family and improve every day, the right way,” Leach said. “It is our honor to promote Kate Moore to Associate Head Coach and continue to build this family together. Go Cougs!”

Moore has helped Washington State reach new heights in the pool and in the classroom in her two seasons working the Cougars. This past season saw senior Chloe Larson become WSU’s first two-time NCAA Championship selection in over a decade, Taylor McCoy cap her career with a school record and a CSCAA National Invitational Championship and WSU record two school records, six NCAA “B” Times, 12 WSU Top-10 times and 20 season-best times at the Pac-12 Conference Championships. Moore also saw all seven seniors be a part of at least one school record during their time at Washington State.

In her first season with the Cougars (2020-21), WSU recorded its highest team score in program history at the Pac-12 Conference Championships highlighted by Larson’s individual championship in the 50 freestyle, WSU’s first individual conference champion. The Cougars recorded a pair of school records, one Gibb Pool record, nine WSU Top-10 Times and three swimmers qualified for the U.S. Olympic Swimming Trails. Larson also earned a trip to the NCAA Championships in the 50 Free and 100 Free.

Moore joined WSU after spending 10 seasons as a member of the East Carolina University Men’s and Women’s Swimming and Diving coach staff following a decorated four-year career as a student-athlete at ECU. Moore worked her final three seasons at ECU as an associate head coach, the previous two seasons as the head assistant coach and prior five seasons as an assistant coach. During Moore’s time on the staff, the Pirates won four American Athletic Conference titles, sent nine athletes to the NCAA Championships and helped ECU claim 41 individual conference titles and 21 relay championships.

I’m biased (she swam for me) but Kate is one of the best ones out there!

Could not have happened to a better individual! Amazing coach and elite recruiter for mid major schools. Will be around for a long time to come.