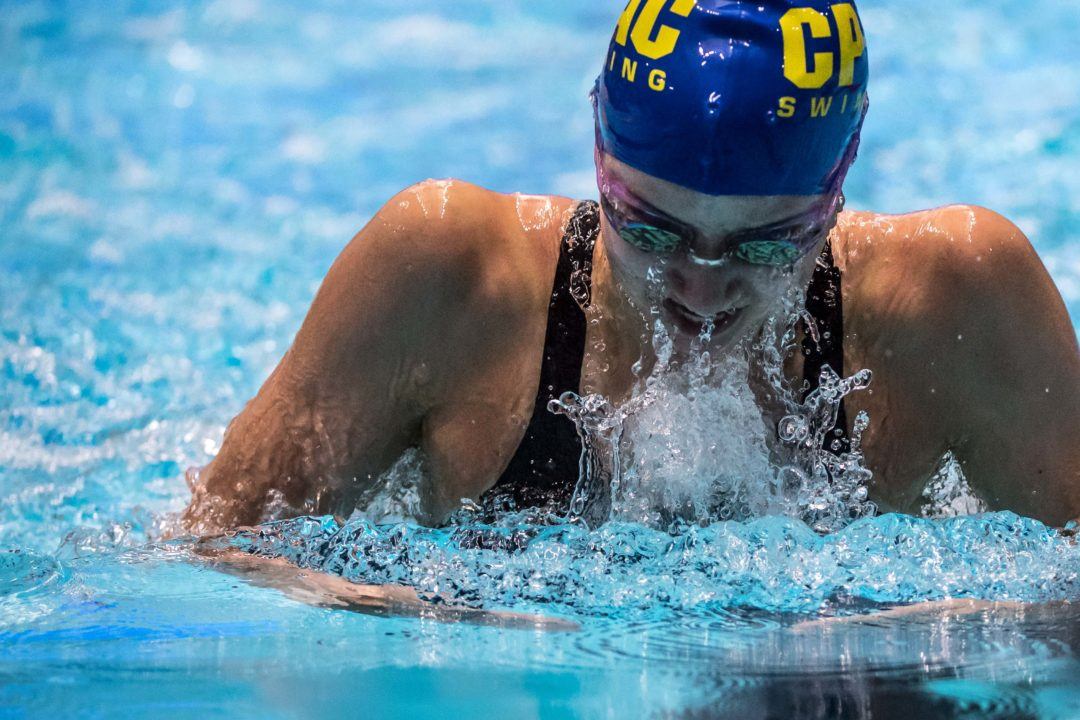 That's the best time in the country this season, and Douglass smashes her old best, a 2:07.92 done at a dual meet against Wisconsin in October. Archive photo via Mike Lewis/Ola Vista Photography

That’s the best time in the country this season, and Douglass smashes her old best, a 2:07.92 done at a dual meet against Wisconsin in October. She set a new UVA record here, taking down Laura Simon’s 2:06.55 mark from 2015, took almost two full seconds off of the meet record held by Tennessee’s Nikol Popov, and finally, she now ranks fourth all-time in the 17-18 age group, one-hundredth behind Breeja Larson and about a half-second behind the NAG record of 2020 UVA commit Alex Walsh (2:05.87).

Douglass has found another gear with the ‘Hoos. A quick check-in on her improvements so far in her freshman campaign:

These are landmark swims for Homans. His pre-college bests were well back; he came to Georgia at 1:44.71 in the 200 back and 1:45.91 in the 200 fly, meaning he took more than two seconds off of both bests this morning.

Tennessee was impressive in the 100 free, leading the way into finals on the men’s and women’s sides. Alec Connolly was 42.76 for the men, with Indiana’s Bruno Blaskovic also under 43 (42.97) as Tennessee got four men into the A-final. The UT women put five women up into the A-final, with Erika Brown dropping a huge 46.85. That’s four-tenths from her lifetime best; she’s one of just 14 women to have ever been under 47 seconds in this event. Brown set the meet record with that swim, erasing UNC alum Caroline Baldwin’s 2017 mark of 47.14.

Looks like Tennessee is running away with this one

Sure, thats fine. Virginia is hands down the best team at this meet. If they had brought their divers, swum the 800 free relays, not DQ’ed other relays, and rested just a little bit, they’d be running away with it.

You might want to check the results. Tennessee is clearly out swimming UVA.

four ifs in your statement. and do you expect anyone to believe that uva isn’t rested at all?

I sure hope they would considering they FULL TAPERED and shaved. Looking SLOW compared to the PACK.

Also – just wait until all of the other freshmen in UVA’s #1 ranked recruiting class this year get going!

Are you kidding? Kate Douglass is flying, and the rest of the National Junior Team at UVA is just waiting for the DeSorbo to kick in – they just need to buy in! It will! And if it doesn’t, more will come next year!

Kate Douglass would have been great wherever she went. Claiming that’s all due to coaching is insane.

The DeSorbo Effect has kicked in. Its clear in the team’s lack of manners and sportsmanship on deck wherever they go.

add Gretchen to that group

Can I have your autograph? We miss your crazy and wrong opinions in the comments here! 😉 kidding

SwimSwam said in their original article they’d keep us updated on scores without diving! Can’t wait to see what happens!

Who cares about the score? Its a midseason invitational

I see nothing about the score on UVA swimming’s twitter, facebook, or instagram. Can you show me where? All I see is noting good swims and times which is exactly what UT, UGA, and IU are doing on their social media.