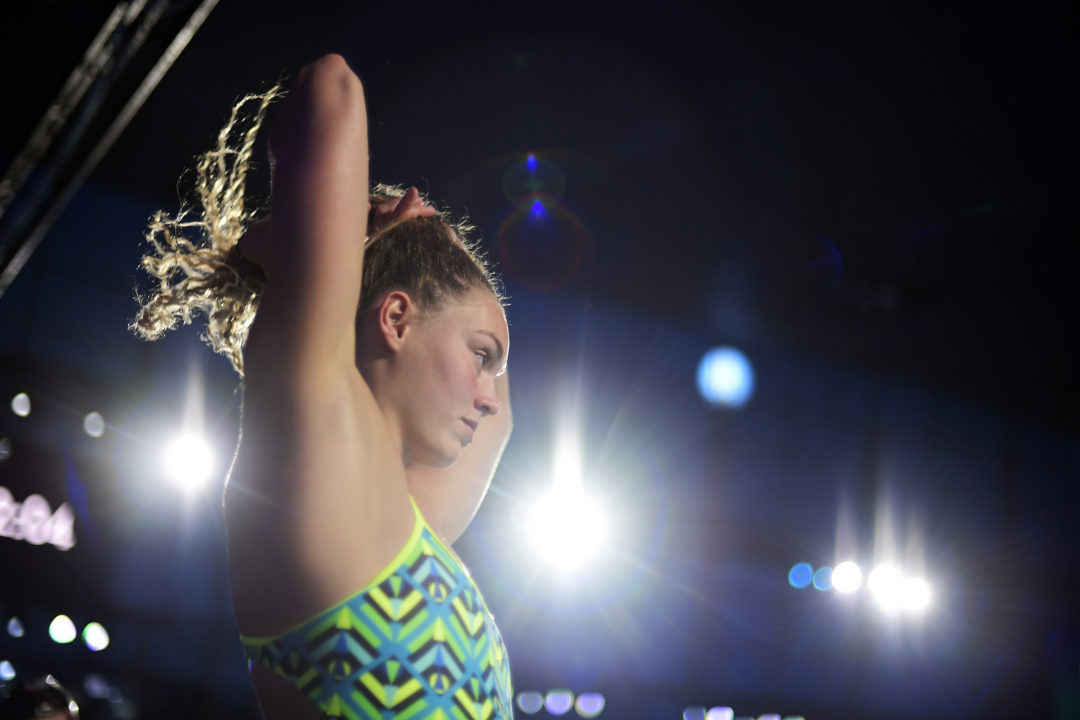 Minna Atherton of the London Roar just-missed her 2nd World Record of the ISL season on Saturday, but did break the Australian and Oceanic records. Current photo via Fabio Ferrari/LaPresse

Australian 19-year old Minna Atherton almost took out her 2nd World Record in as many meets on Saturday at the International Swimming League European Derby event in London.

Also in Budapest, Atherton broke the World Record in the 100 backstroke, swimming 54.89.

Katinka Hosszu still holds the World Record in the event, .02 seconds faster than Atherton’s Saturday swim. Atherton has improved at every meet this season, in spite of tempering expectations pre-race by talking about how heavy her training is, so that World Record could be in danger in Las Vegas.

Atherton continues to go out fast in this 200 back and use her speed, but on Saturday she actually split quite differently than Budapest, moving more of her energy to the 2nd 50 before fading a little harder late in the race.

So close! Hope she rests more for Vegas and takes another crack.

It’s a shame she isn’t in this kind of form near a full taper SCM meet.

Eh, conversions are approximations and can be really off if a swimmer is substantially better or worse at short course. For the record, Atherton’s been 2:06 in long course.

exactly ….too approximate to make any sort of accurate conversion

If 8 seconds was accurate than the scm WR 200 free should be about 1:34…so yeah, conversions.

So then the rest of Isl this year are 2.09 & slower . Minna is the ( only ) outstanding swimmer in this league. She has been unbeaten in world class times in all 3 meets . If she gets the same money as the rest of the loafers .then Isl is a communist plot . Now it is taking over Las Vegas & all the high rollers on the table will be reduced to $90 winnings . I think it should be renamed the Bernie Swim Series .

Only 7 Bernie ppl on SwSw. In 8 hours . My man Josif Bidenko still in there with a chance .

One of the softest record in SCM list. #2 was 2006 2:02.05 and then in 2015 three Japanese swimmers follow that not many people have heard about. I’m very disappointed by Atherton. Hope she will be better in Law Vegas.

im disappointed in the effort you put into this comment

funny how that works, hosszu gets mvp in budapest so he cslls her performances weak, saying that atherton was stronger across the board. now atherton went 0.2 faster in the 200 here than her budapest time, and her performance is disappointing?

You are reading too much of Yozhik. Be careful, it can be addictive.

You are absolutely right. This record shouldn’t be in Hosszu’s name. It should be Smith or Franklin or Baker or Masse etc. Any real backstroker. How in the world Hosszu can be backstroke world record holder? In particular stroke she is world recorder holder only when nobody of real swimming aces cares about that.

so the olympic champ in the 100 back and olympic silver medalist, lc world championship silver and bronze medalist in the 200 back isn’t a real backstroker. you’ve outdone yourself this time, yozhik. i’m holding you to the standard of this comment now

Thank you for promotion 😀
BTW, do you remember who she lost in Rio? It was Maya DiRado, the swimmer who was never even close to the world record. And you probably remember that Rio gold medalist was 2sec slower than the one in London.
If you may notice I’m not talking about medals. Hosszu had plenty of them. I was talking about World records. That is about quality. I hope you understand what it means. World record holders in 100BK Masse and Baker let Hosszu win the Olympic medal with pretty much modest time by world record measures. Well, luck is an essential part of sport competition.
Give her these IM competitions. The competition of whose… Read more »

hahaha baker and masse get up at 5am and train hard everyday for 4 years, just to go easy on someone else at the big dance. these revelations have made my day

thanks, now i have a flawless explanation for every swimming result ever. what are you going to say next, that chalmers was capable of going 47.08 in 2017 and went as far as pulling out of worlds to give dressel a chance?