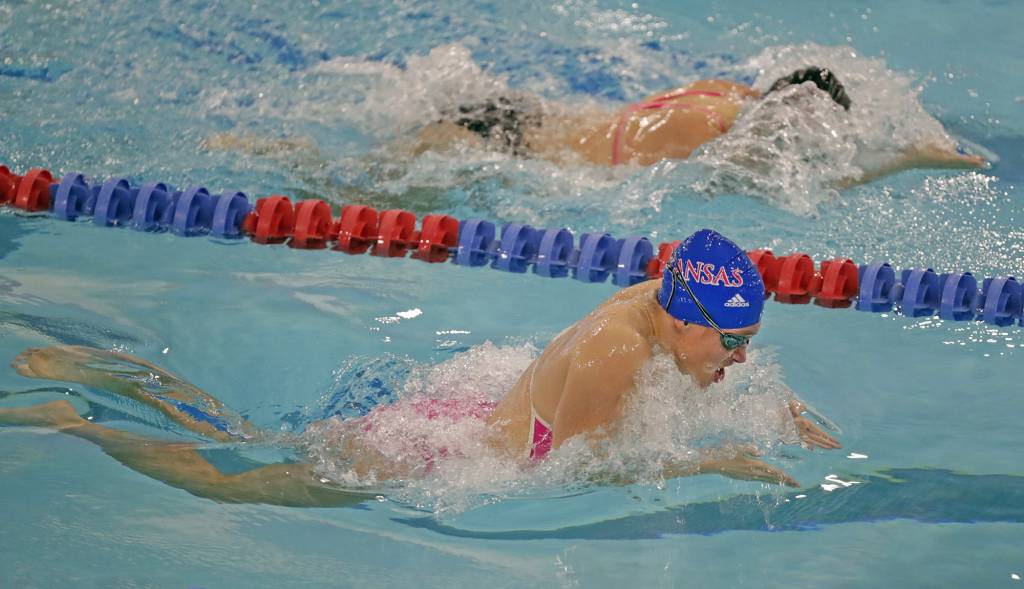 LAWRENCE, Kan. – It was senior day for the Kansas swimming and diving team on Saturday as part of the second day of the Kansas Double Dual meet against South Dakota and Missouri State. The team sent a strong message as they won both matchups in convincing fashion with a 261-87 win over South Dakota and a 244-101 victory over Missouri State inside Robinson Natatorium.

In diving, it was freshman Jiayu Chen who claimed her second top finish on the weekend. In the three-meter diving, she totaled a final score of 287.20 which was just under four points ahead of fellow KU freshman Franny Cable (283.75).

The nine first-place finishes for KU, combined with their eight from Friday, gave the Jayhawks 17 top finishes out of 19 total events held on the weekend.

The Jayhawks next meet will be held on October 25 for KU’s annual Alumni Meet. The start time is set for 4 p.m. inside Robinson Natatorium.

LAWRENCE, Kan.  – The Missouri State men’s and women’s swimming and diving team wrapped up competition Saturday at the Kansas Double Dual, stringing together a slew of individual victories to highlight day two at Robinson Natatorium.

Both MSU squads handily defeated South Dakota, with the men delivering a 218-129 decision while the women cruised to a 243-108 margin. Host Kansas split the women’s results, serving them a 244-101 loss in the double dual.

“I continue to see team development and like our group’s attitude and approach early in the season,” said head coach Dave Collins. “We still have a lot to improve but progress has been made in both meets.”

The men’s side took the top spot in every individual event, combining for seven first-place finishes in the second set of swims.

Michael Hampel added to his impressive dual resume, tallying his third title of the meet in the 200 breaststroke (2:06.00). Arthur Cury also sported multiple wins through the two-day event, taking the 100 freestyle by nearly a second to bring his total to two.

Seniors Thomas Heye and Jacob Schultz got in on the scoring action for the Bears in back-to-back events, garnering first-place points in the 200 backstroke (1:55.54) and 100 fly (50.19), respectively.

“This weekend provided lots of learning opportunities,” said Heye. “We had a lot of freshmen step up, which is exciting as we move forward.”

Newcomers continued to contribute key efforts as Tyler Lewis notched the top spot in the 400 IM (4:06.67) to begin the day’s individual events. Samantha Hietpas dominated another long-distance race, earning runner-up in the 500 freestyle. She was one of four Bears to place in the event’s top-five.

“Getting my first college win makes me excited for our mid-season meets,” said Hietpas. “Having a supportive team atmosphere has pushed me to perform my best.”

Pawel Krawczyk provided the Bears with insurance points in the long-distance 500 freestyle, turning in a first-place finish in the closing events.

The women boasted a host of runner-up swims as Sarah Allegri, Haley Allen, and Sydney Radloff capped the meet with key placements throughout the 200 backstroke, 100 butterfly, and 200 breaststroke.

Michael Claunch swept the diving portion of the dual, claiming another first-place finish on the 1-meter board (278.45). Dayana Popa and Ashley Yarbrough led the way for MSU on the women’s 3-meter, separated by a narrow margin for third (266.80) and fourth (266.6) place.

The Bears secured the second-place finish in all four relay events.

LAWRENCE, Kansas – South Dakota swimming and diving teams fell short to both Kansas (261-87) and Missouri State (461-237) at the Kansas Tri-Duals held Friday and Saturday inside the Robinson Natatorium.

Cooper Fuchs, a freshman, captured the lone individual victory over the two-day meet for the Coyotes when he touched first to the wall in the 50 freestyle in 21.37.

Fuchs also teamed with Zachary Kopp, Jake Leichner and Charlie Bean as the foursome won a pair of relays for South Dakota, swimming to wins in the 200 free and 400 free relays.

The quartet of Bean, Wyatt Thompson, Jacob Won and Leichner would finish second in the 800 free relay while a third-place effort came from the 200 medley relay team of Brady Torborg, James Ryan, Won and Fuchs.

Individually, the Coyote men’s squad had seven runner-up finishes and nine third-place efforts over the course of the two-day meet.

Taylor Rau led the women’s team with a pair of third-place finishes as the freshman touched the wall in 2:29.53 in the 200 breast and 1:07.17 in the 100 breast. Sabrina Sabadeanu posted a third-place finish in the 200 back while the 400 free relay quartet of Meghan Atwell, Emily Johnson, Jordyn Schnell and Rau finished third in 3:38.91.

The Coyotes are back in the pool to take part in the Fargo Tri-Duals on Oct. 18-19.