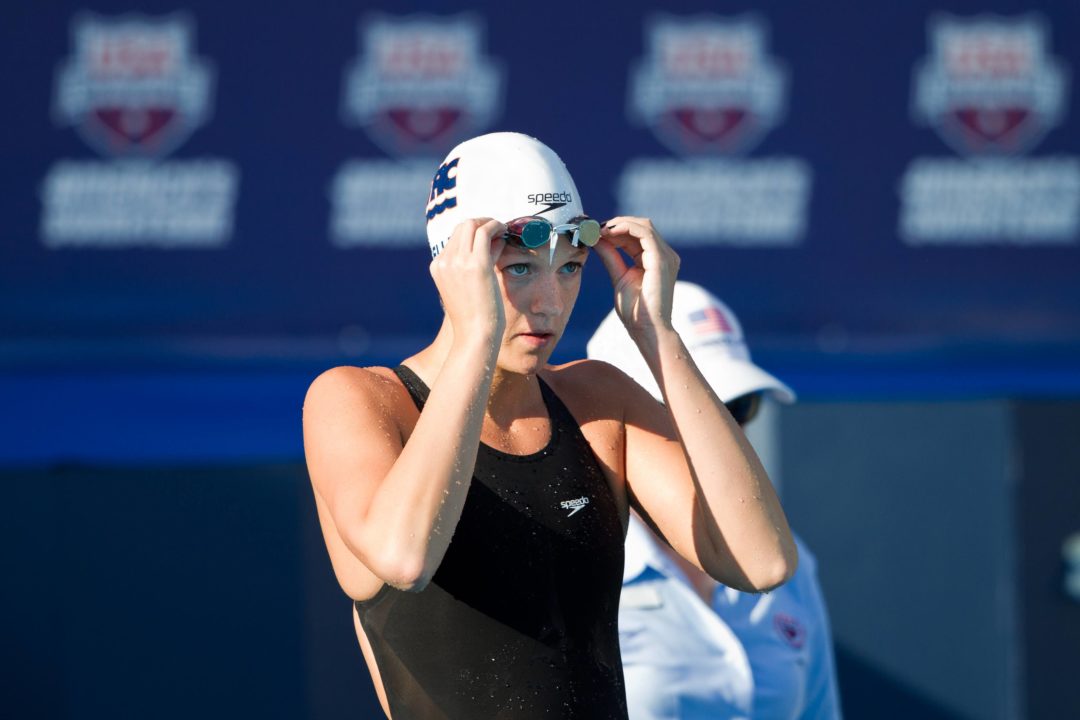 Justine Mueller has always been very good at the U.S. Open, and the same held true on Sunday. (File Photo: Tim Binning/TheSwimPictures.com)

The final night of the 2013 U.S. Open Championships in Irvine, California saw more meet records, but the latest was from a name that you all know, but may have forgotten.

Justine Mueller of T2 Aquatics, who a few years ago was a fixture on the Grand Prix circuit but has been quiet this year, won the women’s 200 IM in a 2:11.06. Not only is that a lifetime best for the 26-year old from T2 Aquatics, it breaks her own four-year old Meet Record, and if she had done it in Indianapolis (where she was only 6th), it would have put her onto the World Championship team.

As it does, it at least should make Mueller’s 2013-2014 season much easier: that time places her on to the National Team, and also into 10th in the world, which makes her eligible for the higher stipend under USA Swimming’s APA program.

South Africa’s Sebastien Rousseau picked up his 4th win of the meet with a 1:59.58 in the men’s 200 IM. He was out very well in this race, but couldn’t quite put Indiana’s Stephen Schmuhl away like he did in the 400 IM. Schmuhl took a more measured approach to the front-half of This race, had a strong breaststroke leg, and actually finished with a faster last 50 than Rousseau.

The result, though, was his first time under two minutes in this race (he had only been 2:02.0 coming into the meet).

Texas’ Austin Surhoff was 3rd in 1:59.92, and Georgia sophomore-to-be Ty Stewart took 4th in 2:00.36. The top-finishing junior was Dynamo’s Gunnar Bentz in 2:01.47: barring something really surprising this week at Juniors, he’s almost assured of a spot on the Junior World Championships team.

Auburn’s Zane Grothe added a second win to his meet, swimming a 7:56.16 for the title. He swam a solid, even race throughout, never splitting slower than a 1:00.2 and never faster than 59.9 through the middle six splits. He and runner-up Eric Hedlin from Canada, who swam open water at the World Championships, paced very similarly, but Grothe was just a bit faster to the punch and gradually built his lead.

In 3rd was Kevin Litherland of the Dynamo Swim Club with an 8:01.17. Litherland is a high school senior and is entering the recruiting process this fall.

Taking the women’s 1500 free was Australian Laura Crockart in 16:08.36. She opened up a huge lead on the fast-finishing Gillian Ryan from NBAC, which Crockart would very much need. Going into the last 200 meters, that lead was around 11 seconds, but Ryan was able to close it down to about 7 to finish 2nd in 16:15.65. She’s swum multiple season-bests at this meet, however this 1500 was not one.

Completing the meet in the women’s 50 free was a victory from Wisconsin’s Ivy Martin in a lifetime best of 25.11. Martin is a swimmer who during her sophomore season in Madison, showed that she was on the verge of a breakthrough, but between a 25.15 at the Minnesota State Championships two weeks ago, and then this swim, she’s no longer a ‘potential’ swimmer: she’s a player on the national scene.

She fits the bill of what the United States needs in the sprints, as well: she’s just a sprinter. Not a butterfly who swims a decent 50 free, or a backstroker, or a 200 freestyler dabbling. Martin is a 50 freestyler that goes up to the 100, and that’s her money-zone. She may do other events for training purposes, but the 50/100 is where she lives.

Martin even swam that time with a horrendous .95 reaction time, making it that much more impressive. On even an average reaction time, that swim would have been sub-25.

SwimAtlanta’s Karl Krug won the men’s 50 free in 22.15, followed by Cal’s Seth Stubblefield in 22.19. That’s hugely-significant, as that jumps Krug up onto the National Team in the 6th position and bumps Stubblefield off (he was 6th at Nationals).

Totally agree with your words about Ivy Martin and more generally about American girls on sprint.
“She fits the bill of what the United States needs in the sprints, as well : she’s just a sprinter. Not a butterfly who swims a decent 50 free, or a backstroker, or a 200 freestyler dabbling.”
You’re right. You can’t beat Cate Campbell if you are not a sprinter all year. Simone Manuel is probably the pure sprint specialist USA is waiting since Jenny Thompson or Dara Torres.

When I talk of pure sprinter I talk about 50 free/100 free. Simone Manuel will be great in both races.