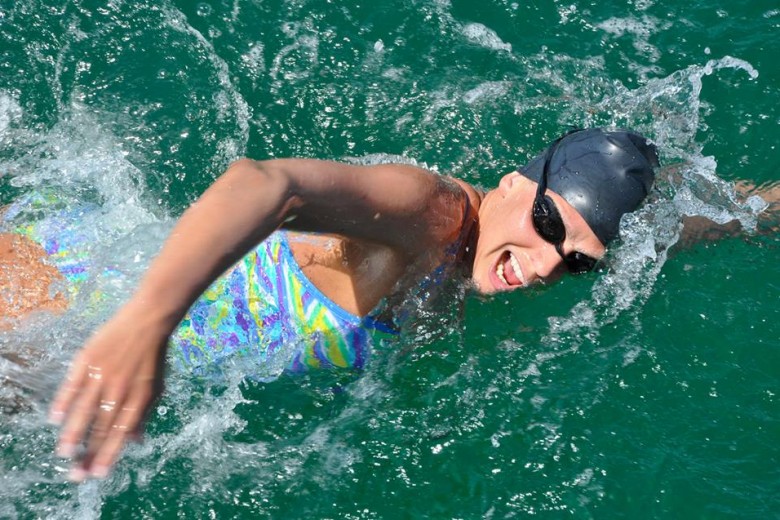 Australian Chloe McCardel made it about a quarter of the way between Cuba and Florida before jellyfish stings forced her to to abandon her quest. (Photo Courtesy: Chloe McCardel)

Australian Chloe McCardel was forced to abandon just a few hours into her attempt begun Wednesday to become the first person to swim from Cuba to Florida without the aid of a shark cage.

In an effort to raise money for cancer research (donation link here), McCardel set off this afternoon from Cuba en route to Key West, with support boats in tow, but 11 hours in suffered a debilitating jellyfish sting that cost her a shot at history. It would seem that this unaided version of a true marathon swim is becoming more-and-more challenging, especially as jellyfish populations explode (though, some experts dispute the significance of this population increase, but that’s perhaps outside of the scope of this post.)

This map tracking her progress shows that she was about a quarter of the way through the 104 mile swim before she was pulled from the water and taken by boat back to Key West.

The last person to try this feat was 62-year old Diana Nyad, who late last year completed her final attempt at 55 miles (over halfway) between the two countries. In four attempts, Nyad was derailed at least once by jellyfish stings herself.

In the late 90’s, another Australian, Susie Maroney, completed the swim, but with the aid of a shark cage.

So the “science bubble” didn’t work?

That was for sharks…

A shark cage wouldn’t directly protect you from a jellyfish sting…however, it would give you some protection by pushing the jellyfish out of the way.

But in the swimvortex article, the “science bubble” was also supposed to work for jellyfish.