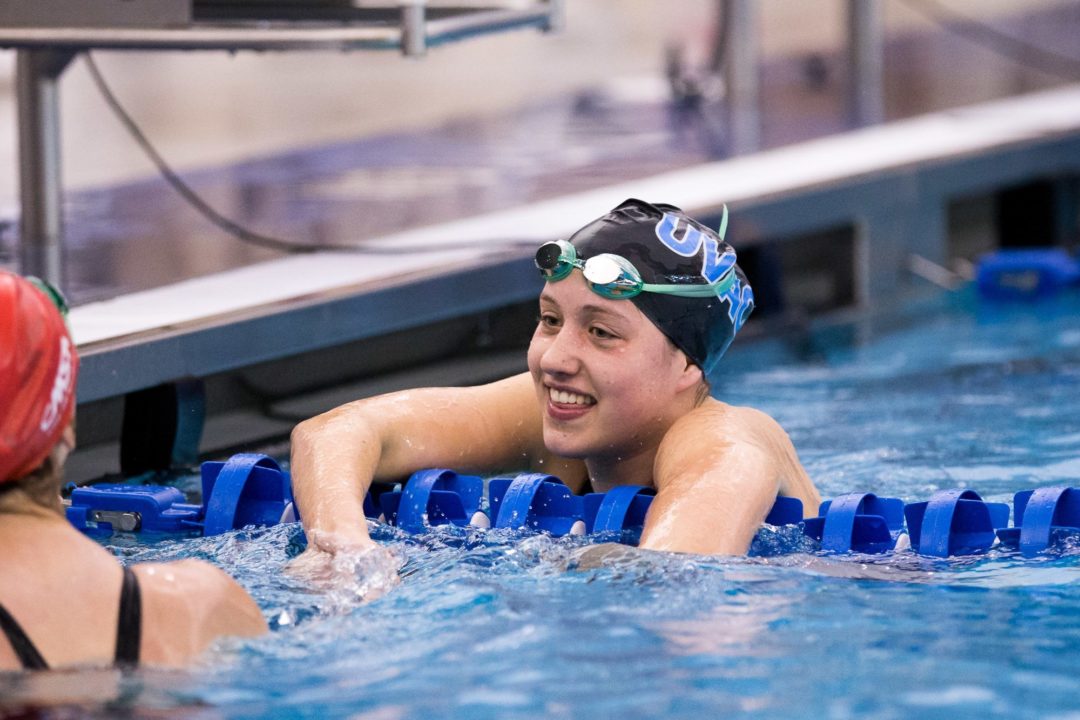 ARIZONA VS NAU VS HAWAII

The Arizona Wildcats traveled to Flagstaff to open the 2016-17 season in a tri-meet for the women and a dual meet for the men. The Wildcat men and women picked up victores over Hawaii, with the women coming away with a victory over NAU as well. Hawaii brought home a win on the women’s side, as they took down host team NAU.

In her collegiate debut, Hannah Cox picked up her first 2 dual meet victories for the Wildcats. Cox’s first win came in the 200 free, where she posted a 1:50.77. She followed that up with a win in the 500 free, hitting the wall in 4:59.60 to outtouch freshman teammate Kirsten Jacobsen (4:59.74) at the finish.

For the women, sophomore Annie Ochitwa stood out winning in each of her four events, two individual and two relay. She placed first in the 50 free with 23.24, two-tenths of a second ahead of teammate Morgan Ginnis. Ochitwa also won the 100 fly with 54.39.

Freshman Cox had a strong performance in her first collegiate meet. She won two individual events and was runner-up in another. Cox outswam freshman Kirsten Jacobsen by one-tenth of a second to win the 500 free (4:59.60) and placed first in the 200 free (1:50.77). The freshman also took second in the 1,000 free with 10:20.53.

Sophomore Dobbs also started off the season strong with one individual win and two in relays. Dobbs swam the first leg of the 200 medley relay to win with teammates Blair Bish, Renny Richmond and Beach (1:24.21).

“We had fantastic meets today,” Schemmel said. “The women came out with a win against Northern Arizona and raced really, really well against the University of Arizona. I’m just really proud of the way we competed. We were up against elite competition and didn’t back down. We’re very excited for the next five to six months.”

Metin Aydin won all three of his individual events, including the 100 back, 200 back and 200 IM for the Rainbow Warriors. Franziska Weidner stood out on the women’s side, finishing with wins against Northern Arizona in the 200 free, 100 free and 200 IM. Bryndis Hansen also had a stellar performance in her Rainbow Wahine debut, finishing fourth in the 50 free behind three Arizona swimmers and fifth in the 100 fly.

“We were great on the boards,” Schemmel said of the divers. “Johan crushed it, Grant Newcombe, who is a freshman, had a great debut, and Monica on the women’s side dove really well.”

The men’s and women’s dive teams are next up to compete for Hawaii, hosting Utah on Oct. 15 at the Duke Kahanamoku Aquatic Center. Both swim teams will be back in action at the A3 Swimming Invitational Nov. 17-19.

FLAGSTAFF, Ariz. – The Northern Arizona swimming & diving team collected three overall event wins in their first dual meet of the 2016-17 season on Saturday, in a spirited effort versus Arizona and Hawaii in the Aquatic and Tennis Complex. The Lumberjacks dropped both ends of the double dual, 222-77 to Arizona and 163-136 to Hawaii, but received wins from junior Alina Staffeldt (200 butterfly), senior Urte Kazakeviciute (200 breaststroke) and Tanya Kurach (1-meter diving).

“It’s a great start to what I think will be another awesome season,” said head coach Andy Johns. “Obviously we have a lot to work on, but I liked what I saw from the girls. I appreciate Arizona and Hawaii for their respect, especially on the pool deck during the tribute relay. All in all, we’re a little better than we were at this time last year. We’re going to get back to work and hope to get better by the time we go to New Mexico in three weeks.”

Staffeldt posted NAU’s first individual win in the 200 fly as she led the race the entire way and blistered her way to a time of 2:03.11. She finished a full four seconds faster than her next closest competitor, pulling away on the final 50 yards. Kazakeviciute followed a similar recipe for success in winning the 200 breast with a time of 2:21.09. Fighting back from a deficit in the first 100 yards, Kazakeviciute used the home altitude to her advantage in overtaking the field in the final half of the race and besting three Wildcats for first.

Meanwhile, Kurach closed the meet with a victory on the 1-meter springboard. In her first meet as a Lumberjack following an All-American season at NCAA Division II Henderson State, Kurach crushed her competitors with a score of 281.45, nearly 30 points better than her runner-up.

Aside from the Lumberjacks’ three overall victories, NAU claimed four more head-to-head dual wins over Hawaii. Junior Kimmy Richter beat the closest Hawaii swimmer in the 1,000 freestyle – the first individual swimming event of the meet- by two and a half seconds with a time of 10:35.11 that placed her third overall. Richter also finished third overall, and first against Hawaii, with a time of 5:09.00 in the 500 freestyle.

On the boards, NAU’s divers made their season debuts with Kurach and Torrente notching the best performances. Along with Kurach’s 1-meter win, she also finished fifth overall on 3-meter with a score of 243.25. One spot ahead of her was Torrente, who finished a mere .90 points behind Hawaii’s top finisher for fourth with a score of 245.10.

On 1-meter, Kurach led a trio of ‘Jacks in the top five with Torrente (251.25) and senior Alexa Geiger (249.60) placing fourth and fifth respectively. The two-through-five spots on the leaderboard were all separated by just over two points, as Torrente and Geiger narrowly missed on a one-two-three Lumberjack sweep.

“This was a really early meet for us,” said diving coach Nikki Huffman. “Tanya getting the win (on 1-meter) was huge. Christina had a great 3-meter, she was only nine-tenths from the win – in the dual meet against Hawaii, so that was pretty exciting. They all did a great job. It’s early for us, but they all did what we needed to do today.”

Other notables in the season-opening double dual included a one-two-three sweep in the 200 fly and a one-two finish in the 200 breast in the Hawaii dual meet. Staffeldt, Richter and freshman Kate Bier all finished easily ahead of any of the Rainbow Wahine swimmers in the butterfly, while Kazakeviciute and junior Audrey Mann combined for the first two spots in the breaststroke. FreshmanFernanda Montiel also shined in her first dual meet, finishing as the Lumberjacks’ top backstroker in both events including a fourth-place overall finish in the 200 back.

Capping the meet was an emotional final race in the 400 freestyle relay. Racing alone in the second heat, NAU fielded a relay team of three leaving the last leg empty in memory of Hayley Edmond with all three teams lining up along the pool deck in remembrance.

Arizona came away with the sweep in the other team scores, including a 232-68 win over Hawaii in its women’s dual and posting a 192-105 victory in the men’s dual meet.

NAU’s next dual meet will be at New Mexico on Oct. 29, but prior to that will host its annual Blue vs. Gold intrasquad meet this upcoming Friday, Oct. 14 at the Aquatic and Tennis Complex at 2 p.m.

Zona looking rough but it is early

You understand this meet was at altitude so times are going to be off.