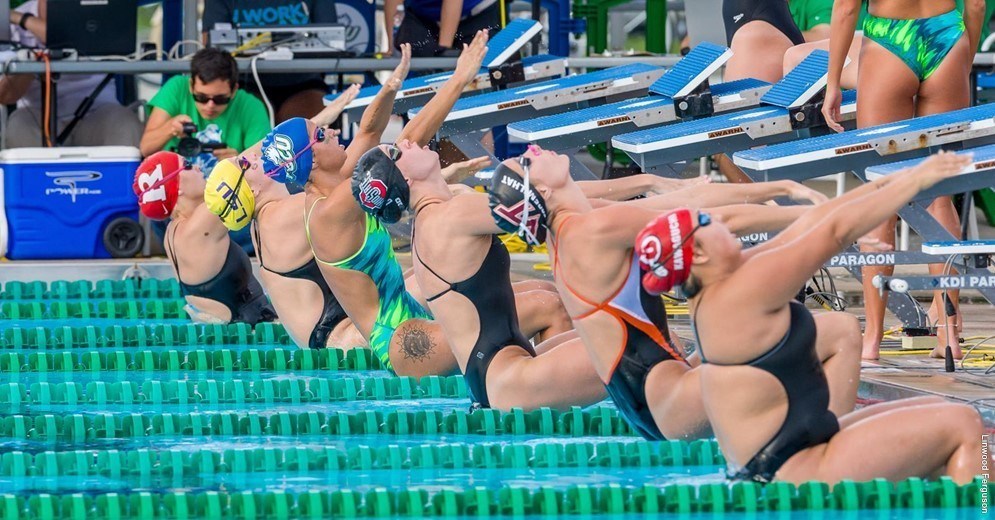 After two days of competition, LSU managed to edge OSU out by 3 points to come away victors at the Florida Gulf Coast Classic. LSU’s Colleen O’Neil took home top honors in the 100 and 200 breast.  Key invididual wins for The Ohio State included Meg Bailey in the 100 IM , Liz Li in the 50 & 100 free (in a NCAA B cut times of 22.74, 49.94). Additionally, OSU took home win’s in three of the four relays that were contested on the day.

On the men’s side, Virginia Tech also won three of the four relays contested, losing only in the 2oo Medley to LSU.  Virginia Tech’s Norbert Szabo took home wins in the 100 IM, 200 free and 200 fly- the latter two of which were in NCAA B cut fashion. Sophomore Ian Ho took home first in the 50 free.

Here are a few words from Head Coach David Rollins about the meet:

.@FGCU_WSwim held its own against five Power-Five programs this weekend. Hear what @Coach_Rollins had to say about the showing. #WingsUp pic.twitter.com/M7hRK3PCS8

The Eagles finished in the top-three in each of the final five events to finish the classic strong with 466 total points but ultimately came up shy of #20 LSU (495), #18 Ohio State (492) and Virginia Tech (476) – all teams that finished in the top-27 at last year’s NCAA Championships. Utah (407) and Rutgers (364) finished fifth and sixth, respectively, to round of the women’s field.

The Eagles turned in season-best efforts in eight of nine events Saturday and capped off the weekend with 15 season-best times out of 17 total events. During Saturday’s final events, FGCU finished in the top-three in the ‘A’ finals in six events to go along with a pair of individual wins in the ‘B’ finals.

“The girls did a great job finishing off the races,” said FGCU head coach Dave Rollins. “That was something we needed to improve on from last night to this morning, and they did a very good job of that. Competing and hanging tough with programs of this caliber gets our girls attention and also gets the attention of the other programs. We have a very strong team, and we’re looking to see if we can build off of this meet and into the rest of the season.”

In Saturday’s individual events, Fanny Teijonsalo (Espoo, Finland/Makelanrinteen Lukio) got things started with a runner-up finish in the 100 IM as she touched the pads in 56.80 seconds – just 0.02 seconds shy of her school record turned in during last weekend’s Green-Blue Scrimmage. Later in the meet, reigning CCSA Swimmer of the Week Christina Kaas Elmgreen (Charlottenlund, Denmark/Ordrup Gymnasium)finished second in the 200 fly and clocked a NCAA ‘B’ cut time of 1:59.22, which registers as the fifth fastest time in program history. Already the school record holder in the event, Kaas Elmgreen now holds four of the top-five times in the event in school history.

Also finishing in the top-three in Saturday’s ‘A’ finals was senior captain Barbara Caraballo (Ponce, Puerto Rico/Indian River/ Newsome HS) and sophomore Katie Latham (Deal, Kent, UK/Sir Roger Manwood’s School). In her first individual event, Caraballo finished third in the 100 back with a time of 56.86 seconds and later followed it up with another third-place finish in the 200 IM after touching the pads in 2:03.63. Latham finished less than a second shy of registering another NCAA ‘B’ cut time as she finished the 100 free in 50.79 seconds.

Highlighting Saturday’s ‘B’ finals, senior captain Sandra Wilk (Lexington, Ky./Paul Lawrence Dunbar HS) and Yee Ching Wong (Hong Kong, China/Diocesan’s Girls School) won the 100 back and 200 fly, respectively, with times of 56.77 seconds and 2:04.20. Wilk’s mark in the 100 back registered as the third-fastest time in the event overall, while Wong used the fastest closing split in her heat to finish first.

Additionally, Hannah Burdge (Stuart, Fla./Martin County HS) clocked a time of 51.23 seconds in the 100 free and finished just 0.02 seconds off her personal record turned in during last night’s 400 free relay. Freshman Elizabeth Zeiger (Cumberland, R.I./Crimson Aquatics) swam an impressive final 50 yards in the 500 free to turn in a time of 4:57.16 – the fourth fastest overall time in the event – and also finished second in the 200 IM ‘B’ final while clocking the fastest final leg out of any swimmer in 28.27 seconds.

To cap off the afternoon and the FGCU Classic, the Eagles went head to head with both Ohio State and LSU in the 200 free relay, but were out-touched by the Buckeyes by 0.11 seconds. FGCU made the final transition with a slight advantage, but, for the second consecutive day, Ohio State’s Zhesi Li’s impressive split gave the Buckeye’s the win despite Burdge’s final split of 22.66 seconds – just one of three swimmers to go under 23.00 seconds.

Up next, the Eagles begin their dual-meet season by welcoming CCSA-foe and in-state rival UNF to the FGCU Aquatics Center Friday, Oct. 14 at 4 p.m. FGCU is 8-0 in the all-time series with the Ospreys.
AB