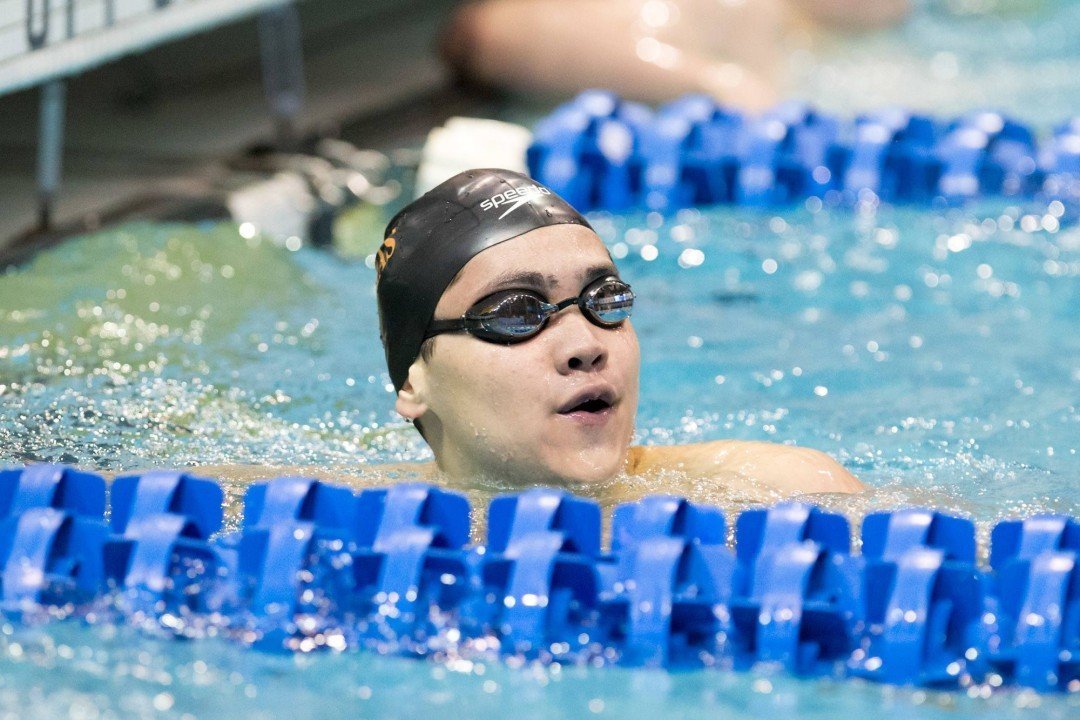 Singapore's Joseph Schooling explains that "beating Michael Phelps is like not like beating someone else." Archive photo via Tim Binning/TheSwimPictures.com

Singapore’s Joseph Schooling made history in Kazan by becoming his country’s first medal winner at a World Championships.  Schooling registered a time of 50.96 to claim bronze in the men’s 100m butterfly, as well as set a new Asian record in the event.

Schooling’s electrifying swim also represents the first time an Asian swimmer dipped beneath the 51-second threshold.  Up until Kazan, Kohei Kawamoto of Japan had swum the fastest time of 51.00 at the Japanese National Sports Festival in 2009.  That threshold of 51-point was something on Schooling’s mind headed into the World Championships.  “I wanted [my timing] to be 50-something this year.  My coaches believed I could do 50… I knew that if I broke 51 I could have a good chance of a medal. I was very happy to accomplish that”, Schooling said.

However, immediately following the 100m butterfly race at worlds, a huge shadow would be cast on Kazan all the way from San Antonio, as American swimmer, Michael Phelps, threw down the world’s fastest 100m butterfly time this year, a 50.45.  Of the 22-time Olympian’s incredible time, Schooling said “I’m very excited to be racing him again. There’s something about him that just really motivates me.”

The 20-year old University of Texas student-athlete continued, “Beating Michael Phelps is like not like beating someone else. You’re beating the greatest swimmer in history. Him swimming next to me will motivate me more and try to push myself to the next level. I’m looking forward to racing him again.”

Phelps currently holds the world record in the 100m butterfly event with his time of 49.82 from 2009.  Putting Phelps’ performance into perspective compared to his own, however, Schooling commented, “If Phelps had posted 48 seconds and broken the world record, I honestly wouldn’t have cared – because I accomplished what I wanted to do (in Kazan). The timings are irrelevant, you know. It’s about your position. If I broke the Asian record but finished last here, it wouldn’t have mattered. It’s all about who can get their hand on the wall first, and that’s how it’ll be in Rio.”

So, along with South Africa’s Chad Le Clos and his now infamous “he can keep quiet now” quote, it looks as though Phelps will have swimmers gunning specifically for him from all corners of the globe in the lead-up to Rio.

If he improves another seven tenths of a second, he still doesn’t get the world record. Not sure what Sergio is talking about

Sergio can’t do math nor does he have the common sense to not take a shot at Phelps. I’ll give him the benefit of the doubt that he means the textile record of Crocker. It’s great for us Phelps fans that these guys keep taking shots at him, because we know from history that it always works out better for a motivated Phelps than it does for the blow hard. We need people like this to speak up at least once a month to keep that fire roaring until Rio. Schooling had a hell of a year, but I don’t know if he can improve another 7/10ths next year. A 50.2 is a time he may never achieve let alone… Read more »

Which book is taking this? I’m in for 1. Srs

@irishdumbassringer Bro, everyone said Joseph wouldn’t go sub 51 this year. So go back to your cave and suck a.. lollipop 😉

Everyone said that, really?

I fully expected him to break 51 this summer, would have been disappointed if he hadn’t. Guy went a 44.51, and has a great track record for LCM.

Now 50.2… That’s going to be tough. And I expect MP to be under that. Big talk from Sergio.

if your not adding useful comments to the discussion, dont be so rude at least.
sad that people actually upvoted you for this, were probably racists

Michael Phelps only swam the fastest time this year because he was swimming in open water plus there were only heats and finals compared to heats semis and finals at worlds. There’s no way he’s gonna be faster than Joseph, chad or cseh next year.

…off the blocks. Your last sentence was incomplete. Otherwise it makes no sense.

Poor Le Clos fans still trying to cope. Their guy talked a big game and came up short, but I admire their tenacity. On a positive note he’s won 2 out of 3 finals against Cal Bear Tom Shields in the past month in the 100m fly 🙂

That, and he completed the distance in the fastest time.

If Phelps had swam a 49 something then yeah, he’d absolutely have still won in Kazan. But he was barely more than a tenth ahead.

Phelps had it harder in nationals then swimmers had in Kazan. Shorter times between races. Very hot humid conditions in San Antonio outdoor pool and he had no one to push him in the race.

Phelps should just focus on the 200 IM. The 100 fly in Rio will be way too intense for his 30 year old body. Let Cseh Chad and Jo fight it out for the top 3 placing.

Uh…Cseh turns 30 in December. I guess he should just roll over and play dead, too.

All of a sudden we have two new commenters here named “Chad le Clos Fan Club” and “Cseh Fan Club” who are both saying essentially the same thing, that Phelps has “no chance” to beat Joseph, Chad or Cseh? Think we might have a troll here?