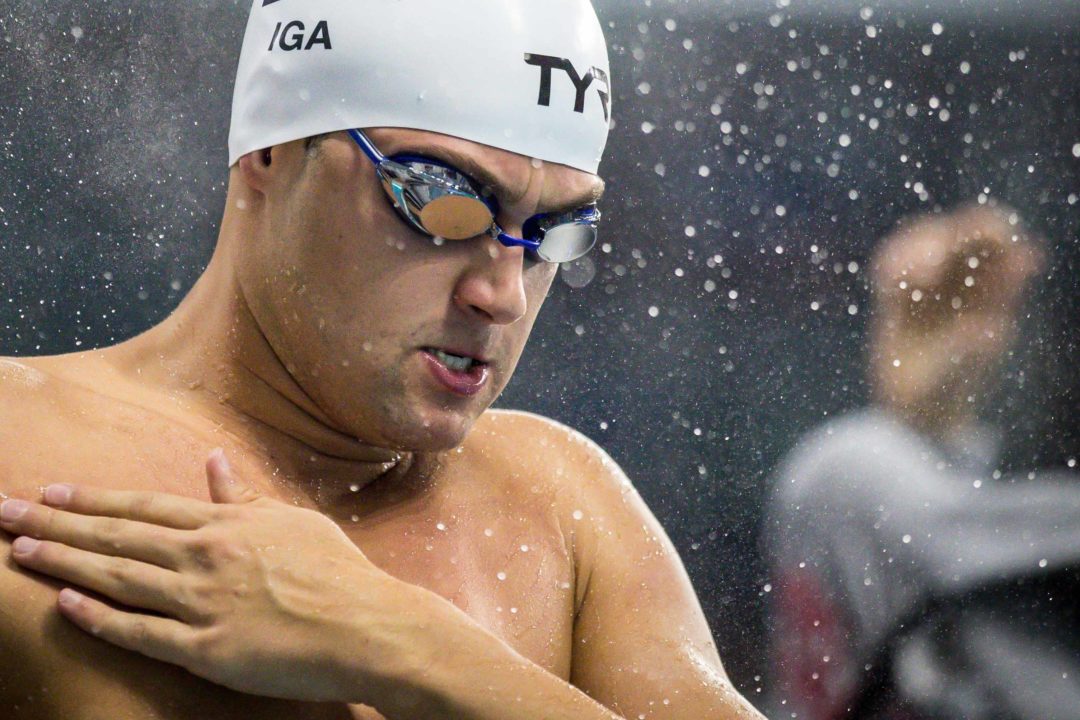 Jorge Iga managed to lower the Mexican national record in the 50 fly while Josue Dominguez was busy setting a new Dominic Republic in the 50 breast. Archive photo via Jack Spitser/Spitser Photography

The 2021 UANA (Swimming Union of the Americas) Qualifier will take place from April 29 – May 3 in Clermont, Florida. The meet will play host to a combination of American club and collegiate swimmers along with contingents from several countries with the UANA including Bermuda, Cayman Islands, and the Dominican Republic, Guyana, Puerto Rico, and the Virgin Islands.

Day 1 of the meet featured only 1 Olympic event each for the men and the women in the form of the men’s 800 free and the women’s 1500, along with the men’s and women’s stroke 50s.

In the men’s 50 butterfly, Jorge Iga shaved 0.01 seconds off his own Mexican record to lower it from a 24.01 to a 24.00. Iga set the previous mark in 2018 at the Central American and Caribbean Games. Colorado Stars swimmer Kent Olsen-Stavrakas was close behind Iga in the 50 butterfly with a 24.15 for silver while the University of Florida’s Isaac Davis was a 24.18 for bronze.

The women’s 50 butterfly was a battle between Mexico’s Athena Meneses Kovacs and Jamaica’s Alia Atkinson. Ultimately, Kovacs got the upper hand with a 27.01 to Atkinson’s 27.03. Both swimmers hold the national record in the event for their respective country with Kovacs holding the Mexican mark at a 26.74 while Atkinson boasts a 26.54 Jamaican record.

Josue Dominguez also notched a new national record during day 1 when he reset the Dominican Republic’s 50 backstroke mark from his 2014 swim of 28.50 to a 27.98 which he used to win the event. Izaak Bastian followed in the 50 back with a 28.22 while Edgar Crespo was a 28.23 for third.

Florida distance star Bobby Finke opened up the meet with a 7:55.05 800 freestyle to pick up a gold medal, just out-touching teammate Alfonso Mestre who was a 7:56.94. That swim for Finke was a little bit slower than his season-best of 7:53.05 which is the fastest time by an American man for 2020-2021. Mestre on the other hand has a shot to be named to the Puerto Rican Olympic team and was only a few seconds off the FINA A standard in the event of 7:54.31 and got well within the FINA B standard of 8:08.54.

2016 Mexican Olympian in the 1500 freestyle Ricardo Vargas Jacobo posted an 8:03.20 to round out the podium. That swim for Jacobo was a little bit off his current PB in the event of 7:56.78 which he swam en route to bronze at the 2019 Pan American Games.

In the women’s distance, Purdue swimmer Kate Beavon was the only woman to get under 17 minutes in the 1500 as she swam to a 16:55.59 victory. That was actually the first time Beavon has ever been under the 17 minute mark in the event, improving upon her 3-year-old PB of 17:01.11 which she set at the 2018 South African National Championships.

Scarlet Aquatic Club’s Chloe Kim finished a few seconds after Beavon in the 1500, posting a 17:03.70 to take silver for Scarlet Aquatic Club. The swim was a monster PB for the 13-year-old, nearly a minute and a half faster than her entry time of 18:21.52. Scarlet teammate Kate Hurst touched with a 17:06.14 for the bronze medal which is 15 seconds quicker than her entry time of 17:21.28.

J-DUDE!!! I think his Breville Espresso maker is really starting to pay off.

Iga underrated butterfly. Always thought he was faster than his teammate Anderson. Probably just as fast underwater too.

You missed the “Cabrones!” 😂