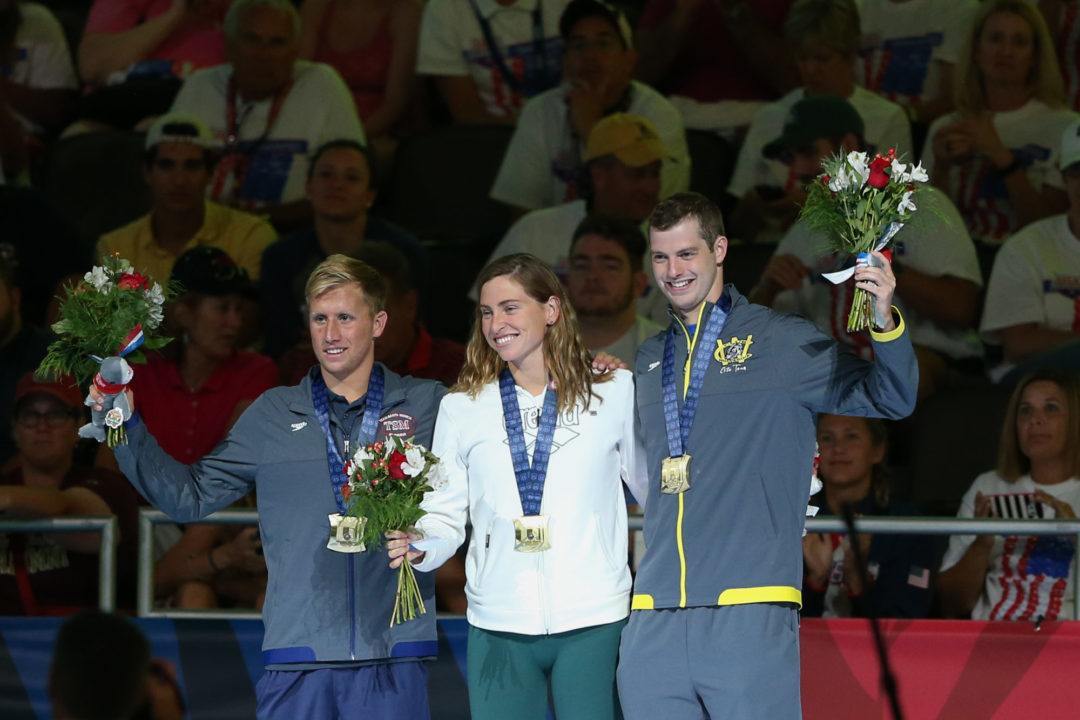 Jordan Wilimovsky (left) was announced earlier this week as a member of the 2016 U.S. Olympic Team in open water. Now he's added a pool spot to his lineup. Archive photo via Tim Binning/TheSwimPictures.com

That makes Wilimovsky the first American ever to qualify for the Olympic Games in both open water and the pool in the same year.

That designation will carry a special challenge in 2016. If Wilimovsky finals at the Olympics in the 1500, he will swim that race on the 13th, and the open water 10k just 3 days later on the 16th.

That’s the closest the two races have ever been together in the three editions of open water swimming at the Olympics. In 2008, the men’s 10k took place 4 days after the 1500m final, and in 2012 it was a whopping 6 days later.

Wilimovsky is not the first swimmer from anywhere to pull double duty. Famously, Ous Mellouli took bronze in the 1500 and then gold in the 10k in London four years ago, though as mentioned he had twice as big of a gap as Wilimovsky will. American Chloe Sutton swam the 400 at the 2012 Olympics in the pool and the 10k in 2008 in open water.

Wilimovsky is the defending World Champion in the 10km open water marathon swim. He’s training with his home club, Team Santa Monica in California, while taking a redshirt season from Northwestern University.

Didn’t Chloe Sutton qualify in both pool and OW?

Rocky – she did, she just didn’t do it in the same year, so not quite a “double”.

Northwestern is tough academically. Best to red shirt to focus on training. Also winters in Chicago are no place for long course or open water training.

Indoor pools in winter toughen you up.

can’t question the redshirt of anyone who qualified for the olympics.

LOL….do your homework buddy – not true

Jordan has been something of a terrific swimmer for a while. When you have someone wildly talented (think Grevers, Bubolz, Alexandrov) its hard to not coach them to success. Like a missile if you point them in the right direction they do well. Especially a distance swimmer- beat them to death, rest a few weeks, boom- golden boy. NW has been on a tragic slide down with little to no racing and recruiting sadly in the current era. At least its a great school 🙂

Congrats to Jordan and the Wilimovsky family!!!

No ous meluli was in it

So proud of you, racing down your dream