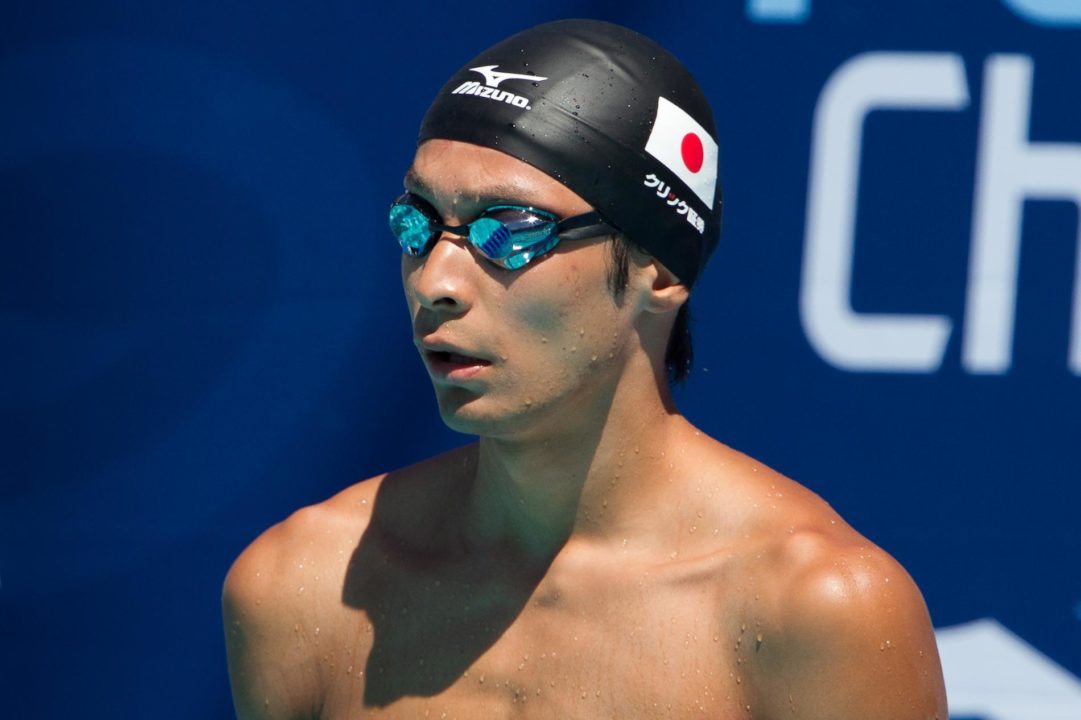 Red-hot backstroker Ryosuke Irie will look to dominate once again, this time at the 2015 Japan Open slated for May 22-24th in Tokyo. Archive photo via Tim Binning/TheSwimPictures.com

Getting goggles in a tangle is no big deal for Japan’s Kosuke Hagino!

Red-hot Emma McKeon (AUS) nabs her fourth gold at the 2015 Japan Open, making her mark all over the world rankings.

Japanese swimmer Ippei Watanabe set a new World Junior Record in the finals of the 200m breaststroke at the Japan Open with a time of 2:09.75.

And just like that, after Day 1 of the 2015 Japan Open, Daiya Seto and Masato Sakai stand atop the world rankings in the 200m butterfly event.

The 2015 Japan Open is set to take place this weekend, with heats, semifinals and finals taking place Friday, May 22nd through Sunday, May 24th at the Tatsumi International Pool in Tokyo.  The usual major players on Team Japan will be present, ready to defend their 2014 Open titles, but some foreign talent will also be in the mix, with visits from both a solid Australian contingent, as well as a lone American.

Ryosuke Irie won a trifecta of events last year at this meet, racking up wins in the 100m back (52.69), 200m back (1:54.63) and 200m IM events (1:59.81) and he will be racing in those same contests this weekend.  On the backstroke front, Irie has been his usual on-fire self, currently holding the number one and number two spots in the world rankings in the 100 and 200 backstrokes, respectively.  His 1:54.62 was clocked at the Aquatic Super Series back in January, but still remains almost a second ahead of the rest of the world.  His 52.99 100m backstroke from April’s Japanese Nationals sits only 11/100 behind that of Thomas Walker-Hebborn’s feat of 52.88 at British Nationals.

Also ready to rock in Tokyo are two world-leading multi-event swimmers on the men’s side for Team Japan; Daiya Seto and Kosuke Hagino.  Although Seto leads the world with his 1:54.63 200m butterfly title-winning time at last month’s national championships, he fell just short in his two other events, the 200m IM and 400m IM, with Hagino topping the podium in both.  Just half a second separated the two in the 200 IM event, with Hagino touching the wall first in 1:56.30 over Seto’s 1:56.82.  The 400m IM saw further separation, however, with Hagino clocking a the world’s first sub-4:10 for 2015 (4:08.54) and Seto finishing in 4:10.97.  Thus, Hagino and Seto sit atop the world rankings’ throne in the number one and two spots, respectively in both IM events and look to continue the fierce battle this weekend.

The sprint freestyle events look to the West, however, as American Anthony Ervin, is scheduled to make an appearance in the men’s 50m and 100m freestyle events.  Last year’s winners in these races were Japanese swimmer Kenta Ito, who claimed gold in the 50m freestyle in 22.36 and Reo Sakata, who nabbed first place in the 100m distance in 49.53.  Ervin has already been faster in the 50m free thus far this year, having gone 22.58 at the Arena Pro Swim Series in Charlotte just a few days ago and he also clocked a sub-50-second (49.91) in the 100m distance at the same Charlotte meet.  This bodes well against a field of sprinters not known for generating the same kind of speed seen on the world stage.

The bulk of the Japanese women’s action will come in the tight breaststroke, butterfly and IM fields, led by Kanako Watanabe.  Watanabe currently holds 3 top ten world rankings, with her top time in the 200m breaststroke of 2:20.90, her 3rd-ranked swim of 1:06.45 in the 100m breaststroke, as well as her 2:09.81 clocking in the 200m IM, which also ranks 3rd.  All swims were conducted at Japan’s National Championships, so she will be meeting essentially the same field on this go-around.  That includes teammate Rie Kaneto, who finished just behind Watanabe in a time of 2:21.90 to capture runner-up status in the 200m breaststroke at nationals, but still ranks 3rd in the world.

For his part, David will take on the primarily Japanese field in the 100m, 200m and 400m freestyles, of which his 400 freestyle has been strongest thus far this season.  McKeon threw down an impressive 3:44.28 to earn him runner-up status to phenom Mack Horton at Australia’s National Championships in April, but the time is good enough to still sit as 3rd-fastest in the world coming into this Japan Open.

I seriously hope you realize how dumb of a comment that was. You don’t? I didn’t think so, so let me explain your ignorance. First of all, the little “#realitycheck” makes no sense. The year phelps broke the WR in the 200 fly with a 1:53 he never went under 2:00 in the grand prix meets. The fact alone that you are comparing his mid-season time in the 200 fly to seed-times of other swimmers that were most likely achieved at tapered meets shows the ignorance in your logic. Last year at Charlotte he went two seconds slower than this year in the 200 free with a 1:51 yet he still split 1:46 at pan pacs. That should show you… Read more »

Your points are well made and accepted, but Gina’s point is also illuminating. 25 guys under 2:00! That needs a reality check! It goes without saying that MP doesn’t do this event at championship level anymore, because he is unlikely to medal. We all need to digest that.

You just saw the imagined insult to MP & lashed out . Fyi , this shows the total strength of japan in this event & plenty of coaches have taken note They all know how amazing this is for one swimming program. They know that these numbers sooner or later push through a champion especially in an event that requires technique , endurance & high mileage . There is a 15 year old with a 1.56 in there also .

You aso did not read – these are not seed times but actual heat times swum today .

Have u seen the movie ” Dumb & dumber ” ? u should see it again and play in the new version . That would fit your distroted mind set once and for all . Wake up call for you here .

Sad to accept it, but MP is not a factor anymore in his pet event, the one that brought him on the world stage, the one where he would crush the competition at 15. He just doesn’t have the endurance anymore and there is no way he can make up for it with the technique. This has nothing to do with in-season meets and so on, this is a pure matter of aging.

But his 30 year old body is still perfectly capable of swimming a mean 100 fly and 200IM, and I believe he can still excel in the 100 free as well (at least a very reliable relay swimmer).

Japanese swimming, on the other hand, has reached incredible… Read more »

Give credit where credit is due: the Japanese have made great strides with their male swimmers in a number of events! For some reason they aren’t doing as well on the female side except in the breastroke at this point though.