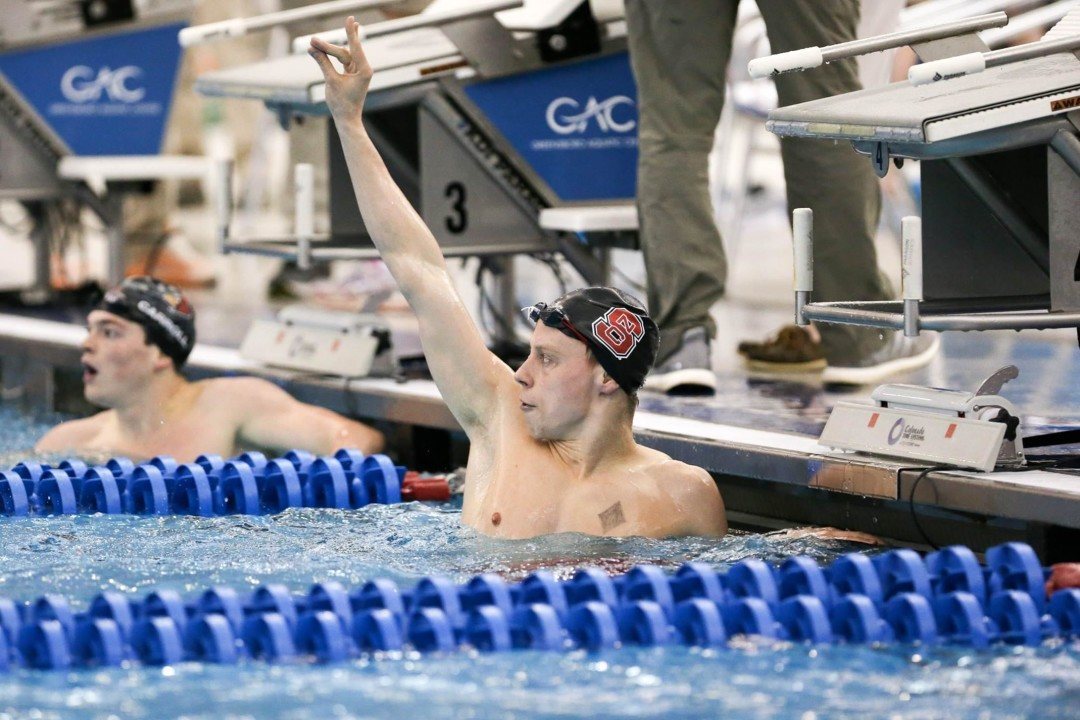 Ipsen and Wilimovsky were neck-and-neck through most of the 1000 free, but Ipsen had the slight edge, winning in a new Pool Record time of 8:55.21. Archive photo via Tim Binning/TheSwimPictures.com

The NC State men picked up another home victory on Friday, this time winning 15 of the 16 total events in a dual meet against the Northwestern Wildcats.

In the first individual event of the night, NC State Olympian Anton Ipsen and Northwestern Olympian Jordan Wilimovsky battled in the 1000 free. The two swimmers were neck-and-neck through most of  the race, but Ipsen had the slight edge, winning in a new Pool Record time of 8:55.21 ahead of Wilimovsky’s 8:56.00.

NC State freshmen Coleman Stewart and Mark McGlaughlin earned their first collegiate dual meet victories. McGlaughlin was a double event winner, first picking up the 100 free win with his 44.62. He followed that up by closing out the individual events with a 1:51.85 victory in the 200 IM.

Stewart, on the other hand, dominated the 100 back today with his 47.84. He also swam the backstroke leg of the winning 200 medley relay, posting the fastest 50 back split with his 22.44.

RALEIGH- The No. 3 NC State men’s swimming and diving team put on a dominant showing in the pool on Friday evening as it took down Northwestern, 185-108, in its second dual meet of the 2016-17 season.

The Wolfpack gave the Wildcats their first loss of the year, as NC State improves to 2-0 and Northwestern falls to 4-1 in the regular season.

Collectively, the Pack posted the top mark in 15 of the 16 events contested and earned seven NCAA ‘B’ cuts.

Quoting The Coaches
Swimming
“Anytime you get a new team to compete against that you don’t normally see until March is always exciting,” said head coach Braden Holloway. “It was a time for our guys to be together since it was a men’s only meet. The lineup we put together gave some guys an opportunity to showcase what they’re made of in events they don’t normally compete in.

“I think the big thing that we can take away from today is that we can put some guys in new areas that can help us down the road. We had some guys swim some new events, and at the end of the day we may have them do it a few more times against other teams if we need it. Today allowed us to see the depth of our team, which is always positive, and it’ll only help us with future competitions.”

Diving
“Today was a stellar performance by Stewart (Spanbauer). He earned his second NCAA Zone cut on the three-meter and got his first collegiate win,” said head diving coach Yahya Radman. “We spent a year developing and taking our time with him, and today he took a couple of risks and saw the reward.

“James (Brady) had a phenomenal day in technical aspects but there’s still work to be done. I think he’s still trying to find his footing in college, so I’m excited to see what’s in store for him at Texas. With Harrison, he’s a great trainer and we’re trying to put together all of the pieces in competition.”

Top Individual Performances
In the first part of the meet NC State swept three events in a row – the 200 free, 100 backstroke and 100 breaststroke. In the 200 free Held and Justin Ress each tabbed their NCAA ‘B’ cuts as they turned in times of 1:36.19 and 1:37.47, in respective order. In the 100 back Stewart dominated the field for his first collegiate win in an individual event, stopping the clock at 47.84, while Zack Warner, Quinlan Stuart and Daniel Graber each finished less than a second a part in the 100 breast.

NC State showed its depth in the 100 free as all four competitors finished in the top four of the event. Mark McGlaughlin touched first with a time of 44.62, followed by Scott Johnson, Stewart and Tyler Rice.

In the second portion of the evening the Pack swept the 200 back, as Hennessey Stuart was the top finisher in the event with a 1:45.23. In the 100 butterfly and 200 IM the team posted the fastest three times in both events. Held, James Bretscherand Andreas Schiellerup tabbed the fastest three times in the 100 fly, as Held notched his NCAA ‘B’ cut with a mark of 47.25 for his fourth of the season. McGlaughlin was the first to touch in the 200 IM with a 1:51.85, while Hennessey and Quinlan Stuart rounded out the top three with times of 1:52.10 and 1:52.59.

Schiellerup and Patrik Schwarzenbach additionally captured event wins for the Pack, as Schiellerup stopped the clock at 20.39 in the 50 free and Schwarzenbach touched the wall at 2:00.64 in the 200 breast.

Diving
Sophomore Stewart Spanbauer won his first event of his collegiate career as he posted a mark of 350.25 on the three-meter dive, while James Brady and Harrison Mitchell finished third and fifth, in respective order. Spanbauer’s performance was enough to notch his second NCAA Zone qualification mark.

On the one-meter dive the Pack finished second, third and fourth overall, as Brady was the top finisher with a score of 293.78.

Up Next
The women’s swimming and diving team will travel to Duke Saturday for its first ACC matchup of the season. Diving will begin at 10 a.m., followed by the remainder of the meet at 11 a.m. inside the Taishoff Aquatics Pavilion.

Justin Hanson in the 200 fly was the highlight of the afternoon for Northwestern, capturing the top spot in the event with a time of 1:48.84. Hanson’s time was over two second faster than the rest of the field.

In the sprint events, Almog Olshtein continued to shine as the junior grabbed second place (21.13), just off the Wolfpack’s Andreas Schiellerup’s 20.39.

On the diving boards, Andrew Cramer won the 1-meter competition for the third consecutive week. The senior posted a score of 307.58. Cramer placed second in the 3-meter event with a score of 346.95.

Northwestern will travel down the road to Duke tomorrow to take on the No. 26 Blue Devils at 10 a.m. CT.

In some interview Braden mentioned concussion

He was at my practice the other day. He’s doing fine