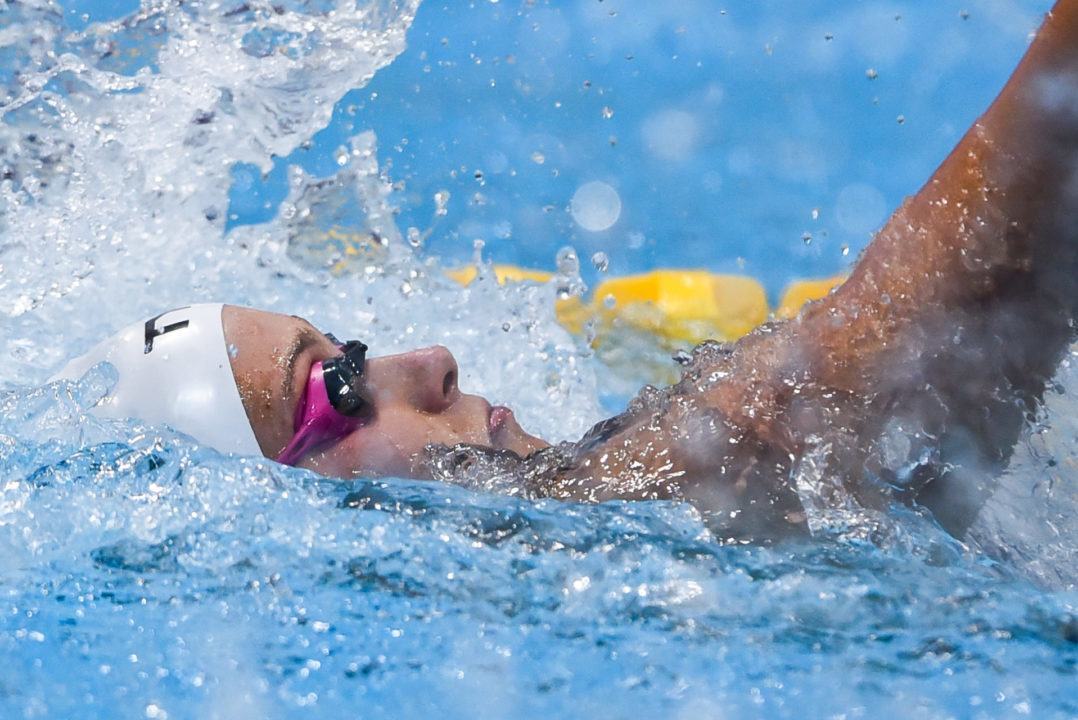 Mie-Oe. Nielsen of Denmark was among the international swimmers winning events on Day 1 of the 2018 FFN Golden Tour Camille-Muffat in Sarcelles. Archive photo via Peter Sukenik/www.petersukenik.com

200 fly standout Ethan du Preez tried the 100m sprint on for size, as Tatjana Schoenmaker was also in the water to close out Durban’s Grand Prix.

The second stop on the FFN Golden Tour Camille-Muffat, which moved to Sarcelles after Amiens pulled out, opened on Friday with a large international contingent crowding out French swimmers from the A finals. Many of the French National Team swimmers who had been at the Nice stage of the tour are absent from Sarcelles, either competing elsewhere (the Nice team is in Milan) or on a training trip in some exotic land. In past years, Hungary’s Katinka Hosszu has not only been a stable presence on the French tour, but she has also swum in every event, winning most of them. Her absence this year has changed the landscape.

In addition to the two distance freestyle races and the 400 IM, Day One of the Golden Tour consists of the finals of the 50 back, 50 breast, and 50 fly. There was much more depth in those finals than in the longer races, and some of them produced quick swims.

All the women’s 50 finals, in fact, were faster than in Nice. France’s Marie Wattel, now training in Loughborough but representing the club team Montpellier, clocked the 10th-fastest 50 fly time in the world, winning her race in 26.16 ahead of Greece’s Anna Ntountounaki (26.70) and Emilie Beckmann of Denmark (26.76). (Marseille’s Mélanie Henique won this event in Nice with 26.57.)

Jérémy Stravius of Amiens repeated as 50 back champion, although he was off his season-best time of 25.37, winning in 25.42. Stravius had competition, though: Greece’s Georgios Spanoudakis was second in 25.51 and England’s Chris Walker-Hebborn, third, in 25.71. Arno Kamminga of Netherlands won the 50 breast in 27.89, edging Lithuania’s Giedrius Titenis (28.06), who had won this event in Nice. There were no French swimmers in the A final of the men’s 50 breast, although Tunisian 8th-place finisher Talal M’rabet swims for SFO Courbevoie.

The top 5 women and top 5 men, based on points, after 3 stages of the Golden Tour will earn a total combined purse of 30,000 €. Points will be awarded as follows: 1st in event = 5 points, 2nd in event = 3 points, 3rd in event = 1 point. The Golden Tour bonus prize money will be allocated: