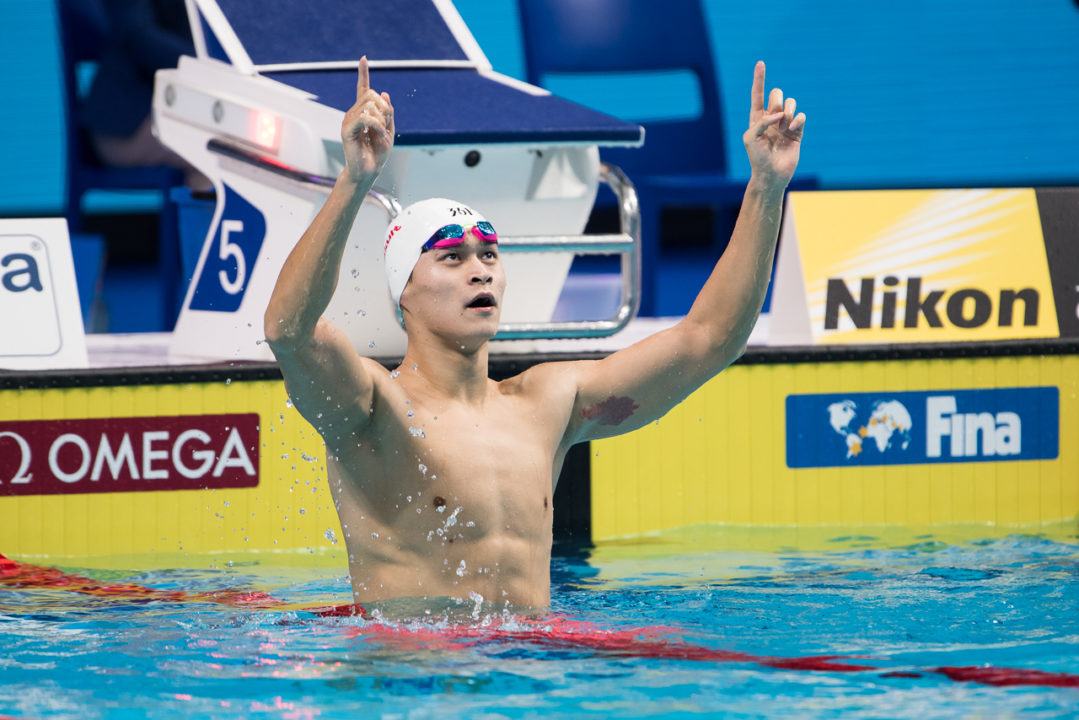 Swimmers across the world have reacted to the news of Sun Yang's 8-year doping ban, which was handed down by the CAS today. Archive photo via Peter Sukenik/www.petersukenik.com

As the fallout from the news of Sun Yang’s 8-year ban continues, many swimmers have taken to social media to express their views on the controversy. Included in that list is Olympic champion Chad le Clos, who just yesterday was quoted in an interview with The Associated Press saying “He (Sun Yang) should be banned. It’s as simple as that”.

Le Clos came second to Sun Yang in the 200m freestyle at the Rio 2016 Olympic Games, and believes he should “get back” the gold medal following Sun’s ban. Today le Clos appeared on CNN, which you can read more about here.

Editor’s note: SwimSwam has searched multiple social media networks, including Weibo, to find reactions from Asian swimmers, but so far have been unable to find any. We will update if and when we do.

Champion swimmer @chadleclos believes he has a claim on Sun Yang’s gold medal from the Rio Olympics.

Former swimmer and Olympic gold medalist Rebecca Adlington also took to Twitter to express her thoughts. In 2016, Adlington called for a ‘full investigation’ to be carried out in swimming following doping allegations in Russian and Chinese swimming.

At the time she said, “We know what it feels like to step up on the blocks at an Olympic Games and look sideways at the other swimmers in the next lanes and be thinking ‘are you clean? Are you not? Is something going to come out afterwards?

She added that a “full-investigation” is the only way to say “the sport is clean”.

Huge news for the swimming world. Finally something has been done especially ahead of the games! https://t.co/JZlC4q7BbL

American swimmers Cody Miller and Andrew Wilson also posted tweets about the news, with Wilson saying he is “shocked” that “they (CAS) did the right thing”.

You don’t smash a vial of your own blood if you don’t have some thing to hide. https://t.co/oiXIjwBavV

How telling is it that I’m shocked they did the right thing https://t.co/bBBp19ehuS

A host of British swimmers have also commented on the news from today, led by Olympic champion Adam Peaty. In an statement, Peaty said “I’m pleased with today’s verdict. I believe a ban was the right decision. I feel strongly about clean sport and I feel a responsibility as an athlete to be true to myself, my sport, my country and the next generation of athletes who look to us for inspiration”.

Duncan Scott, who refused to stand on the podium with Sun Yang at the World Aquatics Championship in Gwangju last July, has also released a statement. It reads: “I fully respect and support the decision that has been made and announced by the Court of Arbitration for Sport this morning. I believe in clean sport and a level playing field for all athletes and I trust in CAS and WADA to uphold these values”.

James Guy, who came 4th in the 200m freestyle in Rio – an event which Sun Yang won gold – also tweeted about the news:

The truth always comes out. https://t.co/VAPrEYbrKq

A host of other swimmers have shared articles on their social media accounts including Phillip Heintz, Sarah Vasey, Blake Pieroni and Shane Ryan.

Paltrinieri: “No joy, only great sadness.”
“To me this whole story leaves only so much sadness, as always in all cases of doping,” Greg tells SkySport, “I just can’t cheer because a rival of mine is found positive for doping. I can’t find anything good in it, I just can’t rejoice. I’ll say a paradox, I’m almost sorry this news came out.”

Sorry about Sun Yang or the credibility of the anti-doping system?

“Sorry for him, of course not. My regret stems from the fact that Sun Yang has marked my professional growth as an athlete. Ever since I was little he has always been my reference point, he was the champion I wanted to beat, I worked hard… Read more »

You know what I find fascinating? When there are doping whispers amongst elite swimmers, they’re right more often than they are wrong: The East Germans, Chinese women, Michelle smith, etc etc. It’s almost as if they can tell just from looking at them if they’re doping

This is going to be the beginning of the end for CAS. Eight year ban for testing agency’s own negligence whereas Aussies/US gets 2 year slap on the wrist for TESTING POSITIVE of anabolic steroids. The nationality of the CAS officials needs to be scrutinized and the officials banned from any rulings.

Perhaps the 8 year ban is based on a second offence, while the two year bans are for a first offence?

it doesnt get better than that

The 2019 world champs are even more egregious. Not only was he allowed to swim despite it being after the vial incident, but he is keeping his medals from it as well… WTF

I now that everyone wanted him out of Worlds, but it would be a really bad precedent to set to find a swimmer ‘not guilty’ in a doping hearing and then leave them suspended anyway. This is different than the Jack case in that Sun was found ‘not guilty’ before Worlds, while Jack hasn’t even completed her initial punishment process.

They should have just found a way to complete the appeals before Worlds. That would have been the most fair to all involved. 9 months should be plenty of time to complete a process like this.