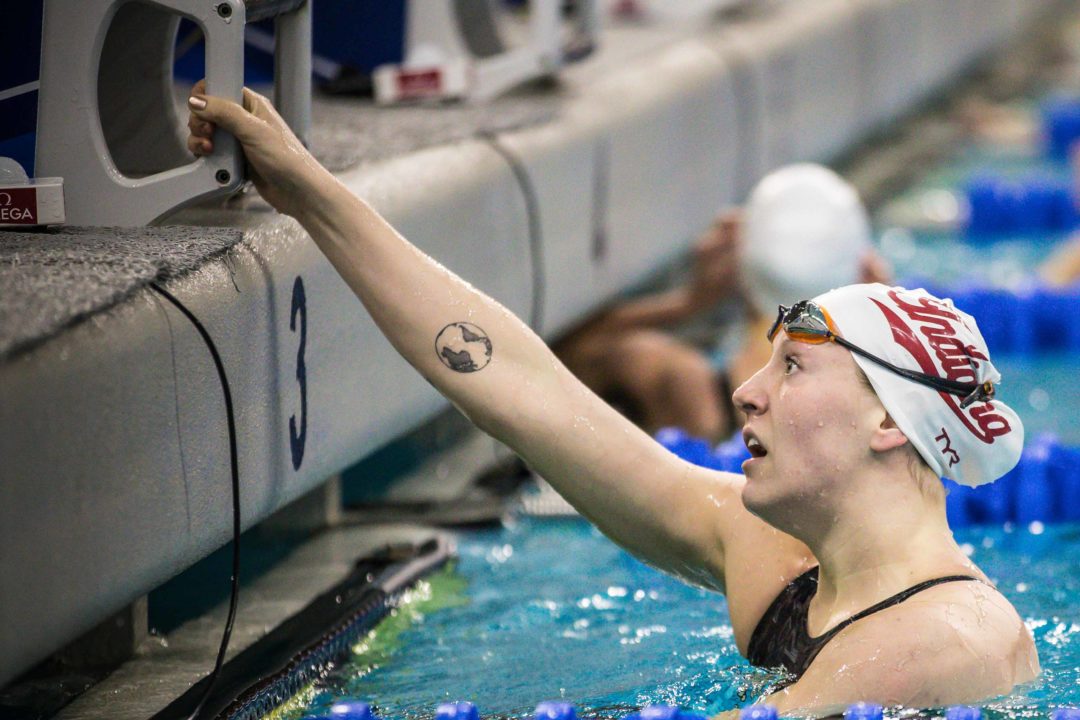 Andison entered the meet with a personal best of 4:43.07, a time which she had just swum in early March at the San Antonio Pro Series. Stock photo via Jack Spitser/Spitser Photography

The 2nd day of the Indy + Elkhart Sectionals meet took place yesterday, with many of the post-grad and pro swimmers posting season bests and giving us a preview of this summer’s meets. Michigan post-grad Miles Smachlo took the men’s 100 fly, swimming a 51.98. Smachlo, a 2019-2020 US National Team member, was just 0.05 seconds off his lifetime best with the swim, and established his top time of this season.

IU post grad Bailey Andison won the women’s 400 IM with a 4:39.54, marking a massive drop for the 23-year-old. Andison entered the meet with a personal best of 4:43.07, a time which she had just swum in early March at the San Antonio Pro Series. She has now dropped almost 6 seconds in the event just in 2021, putting her on an excellent track heading into this summer. Andison represents Canada internationally.

Blake Pieroni, another IU post-grad, took the men’s 200 free with a 1:48.37. The swim marked a season best for Pieroni, who why be a contender in the 200 free at the U.S. Olympic Trials this June. Teammate Zach Apple was right behind Pieroni, touching 2nd with a 1:49.81, breaking 1:50 for the first time this year. Apple is also a contender in the 200 free this summer, and both he and Pieroni are among the swimmers considered likely to make the 4×200 free relay in Tokyo.

It was WAVES Bloomington/Normal Y 18-year-old Anna Peplowski who took the women’s 200 free, swimming a 2:00.66. Peploswki, who will be joining her sister, Noelle, at IU next fall, dropped nearly 3 seconds with the swim. The time also came in under the Olympic Trials Wave I cut, marking Peplowski’s first Trials cut of her career. Michigan post-grad Gabby DeLoof came in 2nd with a 2:00.77, although DeLoof raced at the Elkhart site, and Peplowski at Indy, so they didn’t compete head-to-head. DeLoof has been as fast as 1:57.62 in the event previously.

Kelsi Dahlia dropped a 58.25 to win the women’s 100 fly, leading the field by nearly 3 seconds. The swim marked a season best for Dahlia by a few tenths of a second. She remains the 3rd-fastest American in the event this year.

I see a 4:45.20 from the 2019 Canadian Trials. Which looks like was her best time up until earlier this month.

yeah I was thinking of Tess Cieplucha 🤦‍♂️