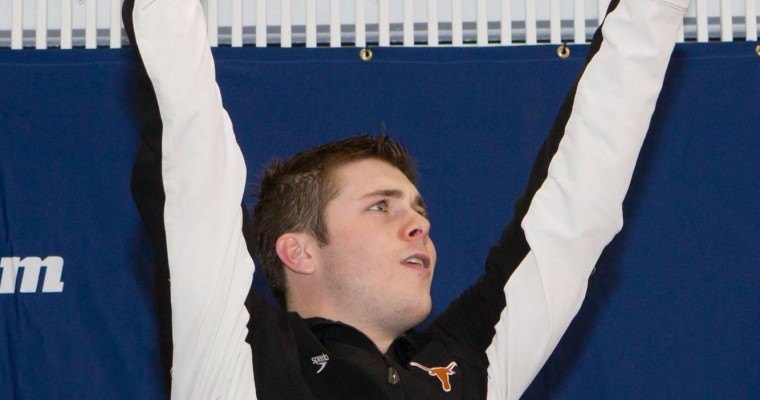 2014 double springboard NCAA Champion Michael Hixon has been officially announced as having signed with the Indiana Hoosiers, and will have... Archive photo via Tim Binning/TheSwimPictures.com

2014 double springboard NCAA Champion Michael Hixon has been officially announced as having signed with the Indiana Hoosiers, and will have three years of eligibility remaining.

Two weeks ago, Hixon told us that he had been granted his release from Texas, but that where he was going hadn’t been set in stone yet. It appears as though final hurdles have been cleared, and Hixon will be a Hoosier.

This means that he’ll train alongside Australian Olympian James Connor, an incoming freshman; and Indiana’s talented list of All-Americans including Darian Schmidt.

Last year, as just a freshman, Hixon won NCAA titles on the 1-meter, on the 3-meter, and placed 7th on the platform event, where he’s still a relative novice, for 57 total points. Not only is that a huge shock to Texas’ NCAA title chances in 2015, it’s a huge boost to Indiana’s shot at staying in the top 10 even after big graduations.

Internationally, Hixon dove for Team USA at the 2013 FINA World Championship in the 3-meter synchro event. There, he was diving with Troy Dumais, but it seems as though he’s settled into Schmidt as his preferred, long-term training partner.

And that could be a huge boost for the pair, and one that most American synchro divers don’t have. The ability to train with a synchro partner year-round, even though there’s no synchronized diving at the NCAA level, should bode well for their future international medal chances.

The article makes it seem like he is eligible right away. Is this true or am I reading the part about Indiana staying in the top 10 wrong?

CT Swim Fan – he was granted a full release by Texas, so yes he will be eligible right away.

There is so much that I do not understand about the NCAA and it’s volumes of rules.

yeah I really do wonder why he decided to leave. his freshman year was a great one in terms of diving.

wasnt there some article on swimswam about his syncho partner being at Indiana? It makes sense that he would transfer if he had his eye on Rio. I’m not complaining, things are looking good for us. 🙂

I also heard his synchro partner is a post grad and could he not have moved to Austin? Not a bad diving program there too?