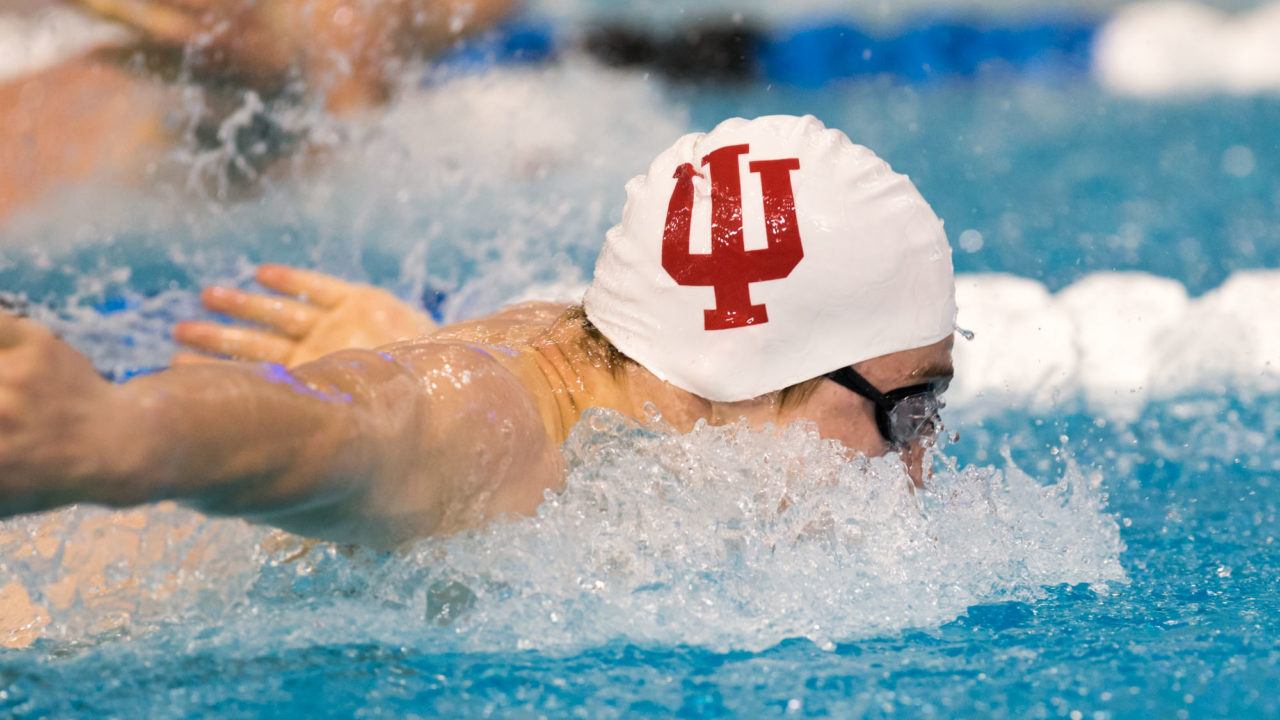 The Cincinnati Bears men’s and women’s teams visited Indiana on Friday, facing off against two Hoosier teams that are off to hot starts this year. The Indiana men were on top of the first CSCAA dual meet poll at the end of October, and have gone undefeated so far this year including wins over Florida, Texas (both in their tri-meet) and Tennessee. After falling to Texas but taking out Florida in their tri-meet, the Hoosier women had rattled off three straight victories coming into this meet.

The Bears have had a good start as well, sweeping both of their match-ups against Michigan State and IUPUI so far this season.

Indiana sat many of their top swimmers, as they will represent the B1G Ten Conference at the 2016 College Challenge against the U.S. National Team this weekend.

The two teams split the relays, with Indiana taking the 200 medley at the beginning of the meet in 1:42.56, while Cincinnati, thanks to a massive anchor from Keire, won the 400 free relay to finish off the meet in 3:28.55.

Two-time Rio Olympic gold medalist Lilly King took part in the meet, but only swam the breaststroke leg on the medley relay as she rests up for the College Challenge which runs Saturday and Sunday.

The Hoosier men kept their perfect record intact, cruising to a win by 93 points.

Like King, Olympic gold medalist Blake Pieroni only swam the breaststroke leg of the medley relay in order to rest up for the College Challenge. Including those two, 12 swimmers from Indiana will represent the B1G conference at the meet.

BLOOMINGTON, Ind. – The Indiana Hoosiers completed their second full-team sweep of the season with men’s and women’s victories over the Cincinnati Bearcats. The No. 2 men’s team triumphed with a 195-102 win, and the No. 13 women’s team secured a 187-106 victory. Each team earned 12 event wins in the dual meet.

The men and women started the dual meet with relay wins in the 200 medley. The women’s team of Marie Chamberlain, Lilly King, Christie Jensen, and Ali Rockett won their heat with a time of 1:42.56. The men’s team, including Wilson Beckman, Blake Pieroni, Max Irwin, and Sam Lorentz, topped their heat at 1:30.89.

The women took the top two finishes in the following 1000 freestyle race, which ended with Stephanie Marchuk in first and Cassy Jernberg in second. Marchuk’s time of 10:00.14 was nearly seven seconds faster than the rest of the field.

Success continued for the women in the 100-yard backstroke, as Indiana earned four of the top five finishes in the heat. Rockett led the pack with her first of two individual wins, posting a time of 55.95 seconds. Chamberlain earned second at 56.19 seconds, followed by Rachel Matsumura in third and Katie Keller in fifth.

Marwan Elkamash paced the field in the 200-yard freestyle event with a time of 1:38.23, and Jackson Miller touched the wall just 0.21 seconds later.

Beckman topped a 1-2-3 finish for the men in the 100-yard backstroke heat, ending the contest in 50.91 seconds. Following Beckman was Wes Duke in second, and Wyeth Brock in third. Laura Morley took home a win in the women’s event, recording a 1:05.23 finish.

Reagan Cook and Olivia Barker put two seconds between themselves and the field in their 1-2 finish of the women’s 200 butterfly. Cook touched the wall first at 2:02.10, followed by Barker at 2:02.73. On the men’s side, Irwin secured his first of two individual wins, hitting a season-best at 1:48.65

Indiana’s divers executed a decisive win on both teams. Taylor Pamplin won the one-meter competition with a final score of 299.33 before taking the three-meter event with a score of 285.15. James Connor earned first in the men’s three-meter with a score of 425.48, and claimed the one-meter victory with a 433.88 score. Joshua Arndt came in second in both competitions, posting a 303.83 score at three meters and a 408.53 score at one meter. All of the scores for Pamplin, Connor, and Arndt were above the NCAA standard marks.

Lorentz kept things rolling after the break with another individual win in the men’s 100 freestyle heat, touching the wall in 45.47 seconds. Elkamash took second with a time of 46.14 seconds, and Duke earned fourth-place after a 46.54 second race.

Matsumura secured a big win in the women’s 200-yard backstroke race, winning in 2:01.32 after a quick start. Shelly Drozdatook second with a time of 2:02.47. The men also earned a 1-2 finish in their event, as Beckman crossed at 1:52.66 followed by Brock in second.

The distance swimmers retook the pool for the 500-yard freestyle races, and the women emerged with the top three places. Marchuk came back after a 1000-yard win to take the event win at 4:54.51, followed by Jernberg in second and Drozda in third. Elkamash won his 500-yard freestyle race after putting a six second gap between him and the field, touching the wall at 4:25.72.

The Hoosiers took the top two finishes in both the men’s and women’s 100-yard butterfly races. The women’s heat featured Jensen’s first-place finish in 55.26 seconds, followed by Cook in second at 56.93 seconds. Irwin won the men’s race in 49.87 seconds, and Patrouch earned second with a time of 50.19 seconds.

Indiana closed the dual with two event wins down the stretch. Samantha Lisy delivered a win in the 400-yard individual medley, posting a time of 4:21.92. The Hoosiers ended on a high note with their victory in the 400-yard freestyle relay. The team of Elkamash, Romany, Lorentz, and Patrouch touched the wall at 3:03.26.

Fans will only have to wait until tomorrow for the Hoosiers’ next action, this weekend’s USA College Challenge at the IU Natatorium in Indianapolis, Indiana. The two-day event will pit current and former Hoosiers against one another in a Big Ten vs. USA Swimming challenge.

Competing for USA Swimming in the short-course yards meet will be IU alum Cody Miller, as well as Indiana post-grad swimmer Zane Grothe. Indiana’s 14 participants in the event are the most of any school.

BLOOMINGTON, Ind. – The University of Cincinnati swimming and diving team competed in its second dual meet in as many days on Friday, falling to Indiana University in Bloomington. The men lost by a score of 195-102 and the women fell 187-106. Senior Jacqueline Keire (Burlington, Ontario/Nelson) won every race she appeared in for the Bearcats, claiming three individual races to stay undefeated in solo races on the year.

// KEIRE CLAIMS VICTORY
Keire accounted for three of the team’s six individual victories vs. the Hoosiers, winning the 200 freestyle (1:49.28), the 50 freestyle (23.13) and the 100 freestyle (50.29) by almost four and a half combined seconds. Additionally, she anchored the women’s 400 freestyle relay team to a win with a time of 3:28.55. Joining Keire on the realy team were freshman Rocky Laabs(Heartland, Wis./Arrowhead), freshman Michaela Wheeler (Loami, Ill./Home School) and junior Sara Wanasek (Burlington, Wis./Burlington).

// UC MEN SWEEP BREASTSTROKE TITLES
The men’s breaststroke events were both won by Bearcats swimmers with senior Ludovico Corsini (Milan, Italy/Giulio Casiraghi) taking the 100 in a time of 56.16 and senior Tyler Roehr (Cottage Grove, Wis./Monona Grove) winning the 200 in 2:06.03. \

The Bearcats return to the Keating Aquatic Center to host the Bearcats Midseason Invitational Nov. 17-19 in a three-day event to close the fall portion of the schedule.