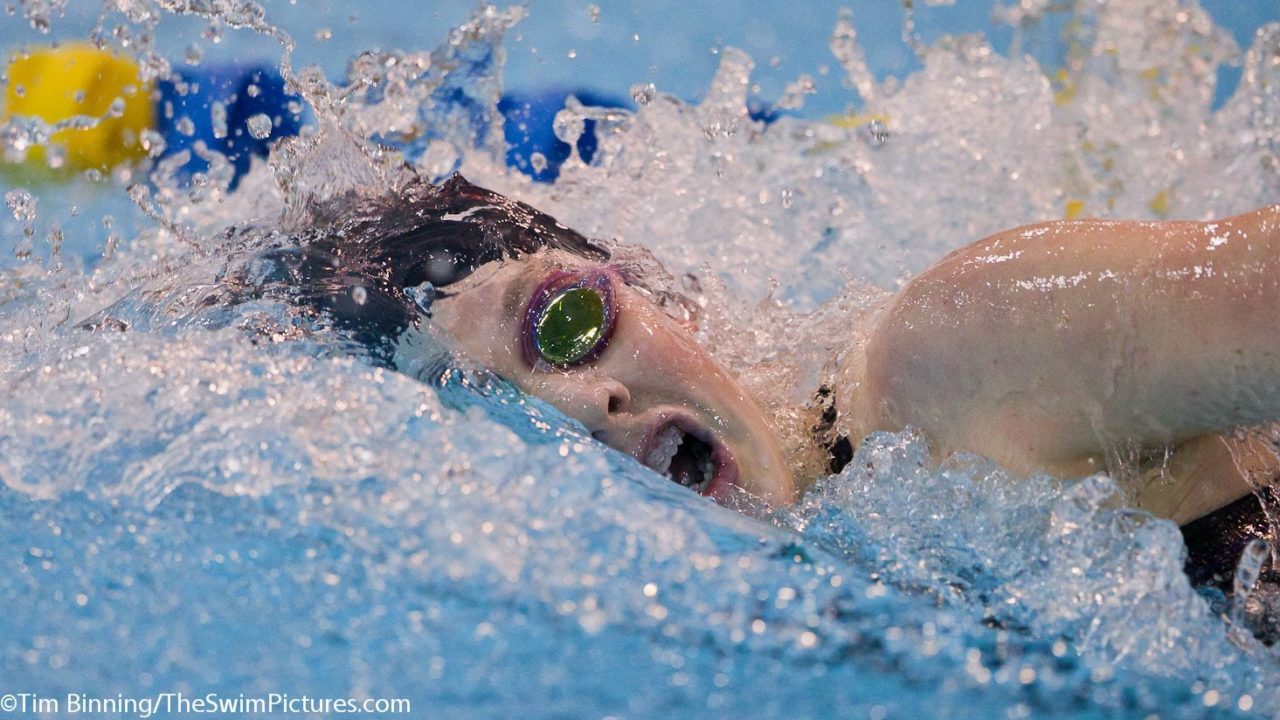 A quick, two-hour prelims in Austin has wrapped up with some fairly good swims already, and a couple of great finals set up for the evening.

The women’s 100 free was probably the most interesting race on day 1, with Missy Franklin taking the top seed in 55.26. Amanda Weir was just behind her in 55.31, and Allison Schmitt was 4th in 55.41. Other interesting names in the final include Karlee Bispo, who is beginning her post-grad career, and Simone Manuel from First Colony, who is a 15-year old junior sprint star.

There was no Breeja Larson in the women’s 200 breast prelim, which left Laura Sogar alone at the top of the pile in 2:30.00. North Baltimore’s Annie Zhu, a Georgia commit, had the 2nd seed in 2:32.50. Another Longhorn, Catherine Wagner, followed up her season-best from two weeks ago with another good swim – marking a 2:35.82 for the 3rd seed. Dipping back down to a 2:34 in finals – which is what she went at Nationals last year – will set her up well headed into trials.

In the men’s 200 breaststroke, Brendan Hansen took the top seed in 2:14.31, without much of a push. Nitro’s Will Licon, the defending Junior National Champ, is the 2nd seed in 2:16.48. North Baltimore’s Chase Kalisz should have a better swim in finals than his 2:17.26, but was safely through. There’s a few other good names in this final, inlcuding Jack Brown, Eric Friedland, and Nic Fink.

Anyone else seeing results from an age group meet when they click the live results link above? Is there a fix?

live results not working, this is sad. not getting them for santa clara either

Live results kicked in finally it appears toward the end of the session. Try using internet explorer, and refreshing until it changes.

@ John : the broadcast on usaswimming works for Santa Clara grand prix !!! Owesome time in prelims for Nathan Adrian in 48.50 . I see him going way faster in final …love that

Jean,
Nathan will pass finals because today is his brother wedding.