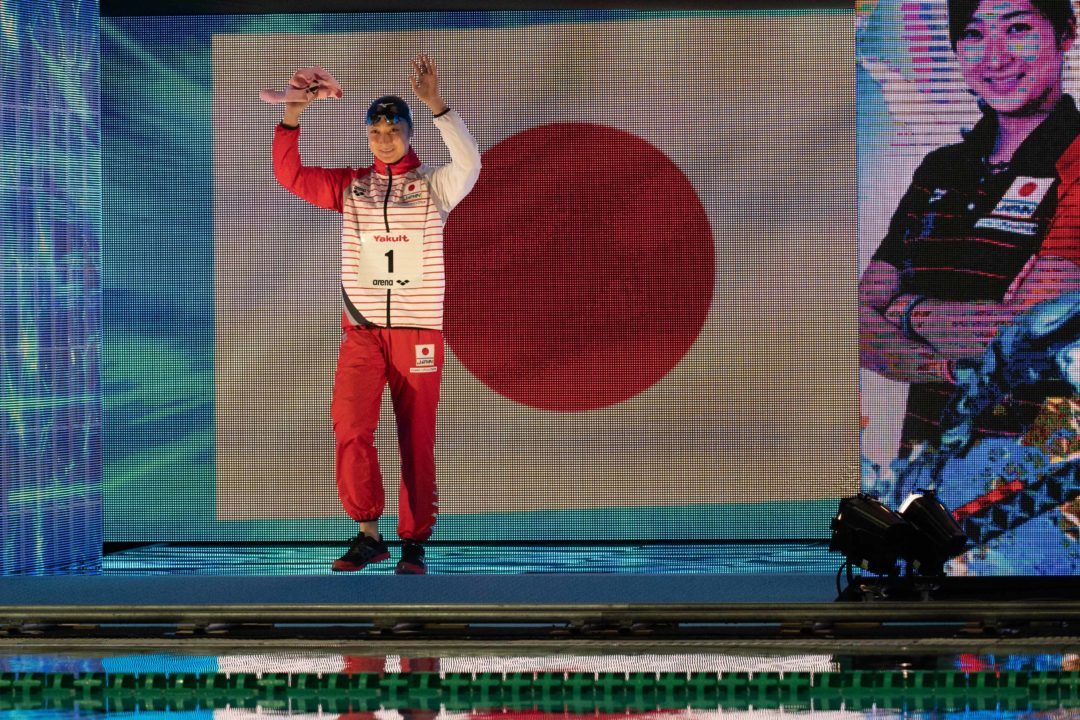 The 73rd National Sports Festival of Japan concluded today, with the nation’s golden girl, Rikako Ikee, capping off a whirlwind summer. After already snagging 4 medals at the 2018 Pan Pacific Championships, including gold in the women’s 100m fly, the 18-year-old went on to claim a historic 6 golds at this year’s Asian Games in Jakarta to become the prestigious competition’s first-ever female MVP.

The teen Olympian was back in the pool this weekend to close out her successful racing season, capturing another two gold medals in Fukui. Competing in the 18 & under category, Ikee scorched a new meet record in the 100m freestyle, touching in 53.46. She was the only swimmer under 55 seconds in the race and came within half a second of her own Japanese National Record of 53.03 set earlier this year at the Japanese National Championships. Ikee blasted a 53.27 to take gold in Jakarta, so the teen is consistent despite several key competitions right in a row.

Ikee also made her mark here in the 50m freestyle, notching the only sub-25 second time of the field. Taking gold in 24.33, Ikee topped the 24.53 Games Record-setting time she produced to take gold in Jakarta. Her time in Fukui this weekend also would have rendered a bronze medal at the Pan Pacs, easily surpassing Ikee’s 24.60 that left her in 6th at that meet.

The teen wasn’t finished, as she single-handedly brought her Team Tokyo women’s 4x100m freestyle relay from 6th to 1st with a huge 52.67 split. The squad ultimately wound up with the silver, but her performance proved once again how crucial she is to Japan’s relays.

Fans were pleased to see Ikee in the pool, as 3 highly anticipated athletes wound up not competing. 2016 Olympic silver medalist in the 200m fly, Masato Sakai, was set to make his post-surgery return, but wound up not competing this weekend. Also pulling out of the meet was sprinter Shinri Shioura, who said he contracted tonsillitis after the Asian Games and spent a week in the hospital. World Championships medalist Yui Ohashi was also expected to compete ni the 200m IM, but was a no-show for her race.

However, there were still some solid performances produced by the Japanese contingency at the meet to demonstrate the strength and depth that continues to grow in the nation with the 2020 Tokyo Olympics not too far off the horizon.

Below are some key swims over the weekend:

Look for your favorite Japanese swimming stars at the Short Course World Championships Trials meet coming up next month.

We’ve heard this season that a lot of swimmers are getting pro. That is how pro should look like. I wish all of them to be that active and that high performers as Rikako Ikee is. Being pro swimmer doesn’t mean only to swim for living. There is also some moral responsibility to perform well even in the cases when the money is not that spectacular.

Rikako Ikee is not a pro though. She is in high school and attending college ( swimming for them) too next year.