“I F**king Love It”: An Open Letter From David Popovici 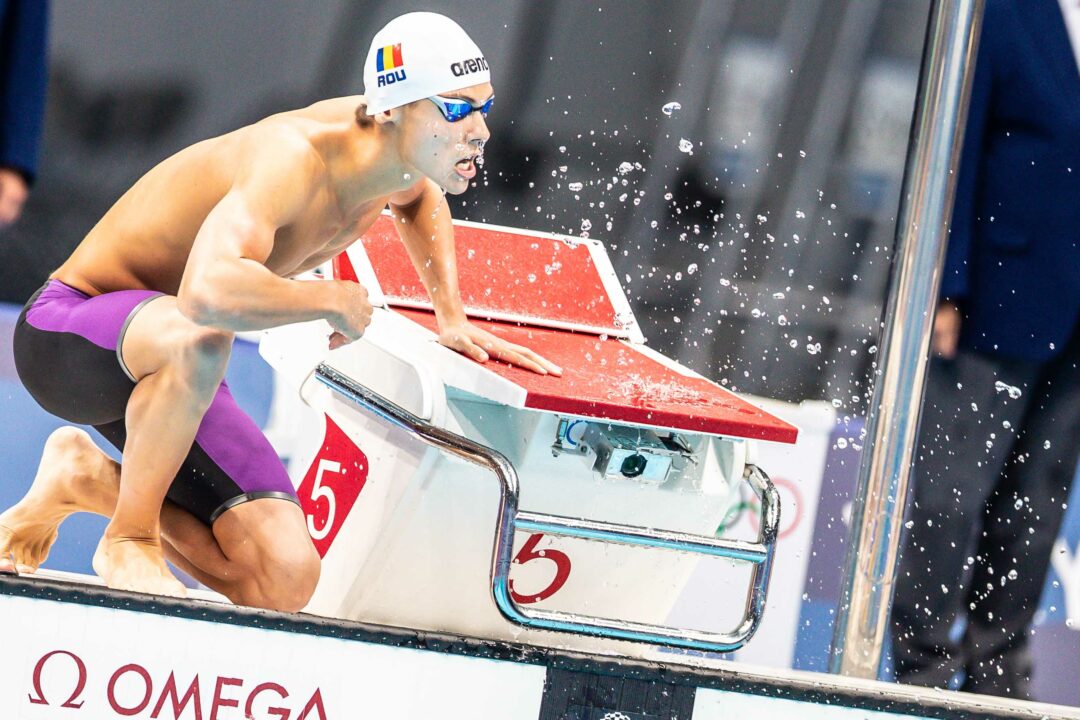 Popovici gives a first-person account of his mindset, goals, and how he's developed his passion for the sport of swimming. Archive photo via Jack Spitser/Spitser Photography

The swim frankly shattered the previous Championship Record of 3:44.01, which was set by Italy’s Gabriele Detti at the 2016 European Championships.

After bursting onto the international scene early last year, Pudar has become a trailblazer for Bosnia and Herzegovinian swimming.

This article originally appeared in the 2022 Spring edition of SwimSwam Magazine. Subscribe here.

This is a first-person article courtesy of David Popovici.

My goal is to never change my mindset, to not forget the most important thing of all: that sport is fun.

The person I am today is the sum of all the things that have been given to me by the people who love me, with patience and attention. Plus, it is something that is only mine.

My family has been, is, and will always be, my rock. They forged me, they shaped my way of thinking, my way of seeing the world, and also my approach to sport. My mom, my dad, and Adrian, my coach, are the adults I learned the most from, and we can also include my brother, 8 years older than me, among this list of life’s teachers.

Maybe I started from the end, to tell you about myself, but the truth is that no story starts from the very beginning, and even when we are born, we are already in the middle of something.

In any case, I’ll start over.

I was born and raised in Bucharest, the state capital of Romania, a city that boasts nearly 3 million people — three out of 19 people in the entire country. It’s a large and lively city, and it has been my starting block for the entire world.

I was an active child — very active. And I know that many people say that, especially those who later become athletes, but I was always moving. I never wanted any toys, any cars, or video games: It was enough to let me play with rocks, sticks, and whatever I found in parks and gardens to make me happy. For example, I loved playing with bugs. My eyes were always intent on capturing new stimuli, in the constant research to discover how the world is made, starting from the very pieces that compose it.

Always in motion, always awake, my mother took me to the park in the stroller and I closed my eyes for half an hour. And by that, I mean exactly 30 minutes. While the other children spent hours sleeping, I was feeling a biological alarm inside me, as if the days were too beautiful to waste them like that. There were too many things yet to be discovered.

Even today, despite the efforts of training, studying and the life I lead, I can never rest in the afternoon. I try, but at most I sleep for two minutes before I feel the desire to start doing something else. For some time now, I have found my way to recover my energy. I turn off the light, turn off the phone, close my eyes and relax. I don’t sleep, but I use this time for myself — a kind of meditation in which I find the strength to face the rest of the day.

That’s the reason I started swimming.

My parents decided to take me to the pool, the same one where I train today, to burn off some of that energy — or at least to channel it — and also to treat my scoliosis.

With water, it was love at first sight. Period. I can recall every single moment of my first swimming lesson. I remember that I immediately felt in the right place — like a fish. Trivial, okay, but true. I’m thin, and I have long arms and big hands. In the water, my lanky body had found the confidence that, for those who are like me, is difficult to find at that age.

From that day on, water has not only been the place where I feel good, but also the factory where I can build my dreams, feed my passion.

The time I wasn’t swimming I spent watching swimming legends. Every morning I had free from school, I ran into the living room as soon as I woke up and put the Beijing 2008 races on TV: Michael Phelps in all his glory. I studied his movements and Dad would freeze the image to show me the mistakes I made in the water, to explain to me that between me and that monster there were “only” many hours of training.

I watched those videos until I learned them by heart. I watched them for at least five years straight, from 7 to 12 years old, and if they were DVDs instead of YouTube videos, I would say that I literally consumed them. Then, starting the following year, the mornings were no longer so free, because I started swimming twice a day. It was very difficult for me to get up early — I didn’t understand why I had to swim at 5:00 in the morning. My eating habits did not make the situation any easier. I’m used to having breakfast two hours before swimming. And training at 5:00 meant sitting at the table at 3:00 in the morning. There hasn’t been a single time that my parents haven’t made me breakfast, showing infinite love for me, and enormous respect for my dreams.

At 13 years old it’s difficult to see beyond the daily effort, to see the importance of every single brick that builds a solid future. Just like my swimming technique. Of course, it’s mostly natural; it’s my instinct that leads me to swim in a certain way, but I’ve also worked a lot and I keep doing it with my coach.

Hours and hours spent on every single detail. Adrian and I talk a lot about swimming, we could spend whole days discussing technique and past legends, without getting bored for a second. According to many, the way I swim has something to do with Ian Thorpe’s style.

Without a doubt, this technique was a source of inspiration for me. More than 20 years later, I’m free to swim that way.

And I say “free” because he was the first one trying to rethink freestyle, in some way. He took the risk of changing the rules of a sport in which, at the dawn of the new millennium, people thought they already knew everything about. Long strokes, very long, and the patience to wait for the body to complete the entire sliding phase. It is difficult to be patient while swimming 100 or 200 meters, but it’s the water that asks for it, and we must listen.

If I had been told two years ago that the child unable to take afternoon naps would have been in the call room at the Olympics, next to champions like Caeleb Dressel or Kyle Chalmers, I would probably have said that you were crazy, or that it was just a dream.

I would have felt like a small ant, or rather a bug, like the ones I played with as a child.

But a few months ago, it really happened. I was in the call room at the Tokyo Olympic Games and my thoughts somehow surprised me: “It’s true, those around me are giants of swimming; they have written important pages of this sport — those same pages that some children will watch and re-watch on TV until they are learned by heart. But I’m here too, and I’m a giant too. I earned this place, and the Olympic Games teach that every lane has a chance.”

I had a great time in Tokyo and I hope with all my heart to participate in more editions, because the Olympics are a different animal. They are a different world where you can have lunch and take the bus right next to your opponents. The Olympic Games are the true essence of sport. And that’s why I never want to forget how much fun I have — how much I enjoy doing what I do.

It was during the second 50 meters of that 100-meter freestyle when I found myself talking in the water. Not in my head but right in the water — or maybe I was talking to the water.

He could have a future as a writer if he wanted to. Excited to see what this kid does in the future, in and out of the pool.

“Hours and hours spent on every single detail. Adrian and I talk a lot about swimming, we could spend whole days discussing technique and past legends, without getting bored for a second. According to many, the way I swim has something to do with Ian Thorpe’s style.
Without a doubt, this technique was a source of inspiration for me. More than 20 years later, I’m free to swim that way.
And I say “free” because he was the first one trying to rethink freestyle, in some way. He took the risk of changing the rules of a sport in which, at the dawn of the new millennium, people thought they already knew everything about. Long strokes, very long,… Read more »

David is obviously a very special kid with an amazing future ahead of him. He’s far from reaching his ceiling and it’s not a question of if he’ll break the 100/200 free world record but when…Dresel might get the 100 before him but the talent on level on this kid is simply scary…and he clearly has not just the physical, but all the mental ingredients needed to eventually go down as one of the greatest swimmer’s in history in due time.

Well I know who my favorite non US swimmer is now, this is some infectious positivity!

Agreed. It gave me goosebumps when I read his article.

Such a wise head on young shoulders. He’s gonna be a dominant force in swimming for a very long time.