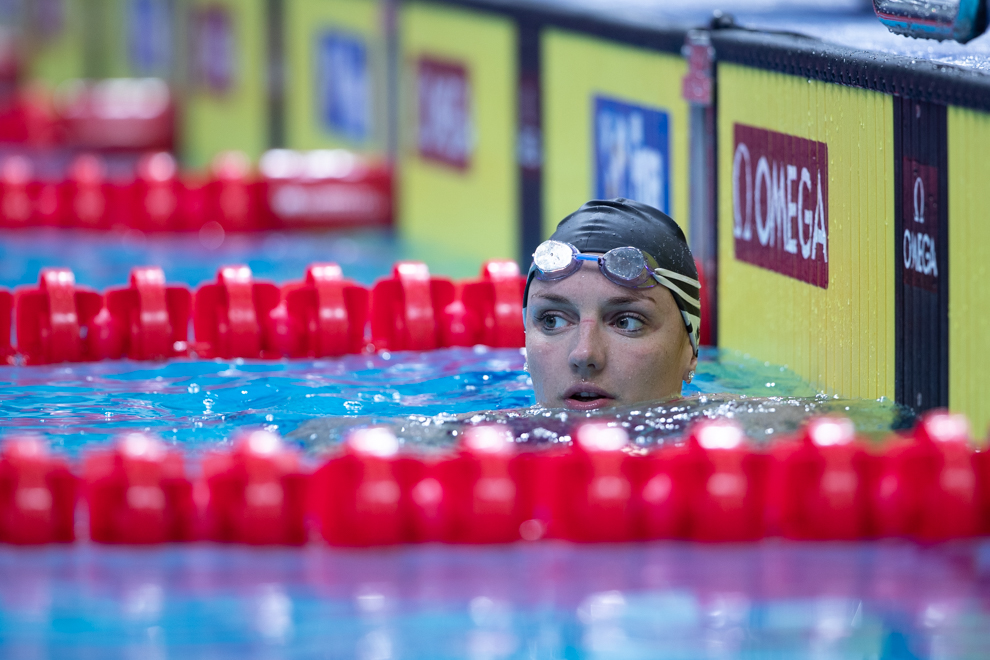 The Iron Lady raced in every event this morning and went on to take double gold in the evening session of the FFN Golden Tour in Nice. Archive photo via “Rafael/Domeyko Photography”

American Kathleen Baker put up another strong performance here in Nice, firing off the 4th fastest 200m backstroke in the world this season. Hitting the wall in 2:07.22 this evening, Baker topped the podium and beat the field by four and a half seconds. You can read more about her head-turning performance here.

Also in that race was Hungary’s Iron Lady Katinka Hosszu, who placed 8th in a time of 2:19.87, but that was after the 30-year-old already completed a grueling 1500m free/400m IM double in the same session.

Hosszu first tackled the longest freestyle event and hit the wall in 16:27.83 to comfortably claim the gold. Her 400m IM time of 4:38.60 came just 2 events later, giving her a second victory in just over 30 minutes.

French woman Melanie Henique captured 50m fly gold in the only sub-26 second of the field tonight. She produced a solid effort of 25.83 to hold off yesterday’s 100m backstroke winner Michelle Coleman of Sweden, who settled for silver here in 26.48.

The men’s 200m IM saw Jeremy Desplanches of Switzerland get it done for gold in a time of 1:57.76. His performance fell just slightly behind the 1:57.59 he logged in December at the Swim Cup Amsterdam. With that outing, he sits as the 6th fastest performer in the world this season.

Interesting to note that Hosszu raced 1500 distance only 12 times (including today race) during her long swimming career. Without much of noticeable progress.. Six of them were done in 2017 season when this distance became an Olympic event. What is that? A backup plan to be an Olympian?
Also what double is more difficult: 1500 & 400 or 1500 & 200.? At first glance it should be the first one because the total distance is longer. But the change in the rhythm isn’t that significant. Making sprint after 1500 may happen to be more difficult. In Kazan Ledecky barely made to final in 200 semi-final after 1500 race.

Little more than that but nearly all before June.

Dang…. I knew she was a beast, but wow… that is serious beastliness.

Legendary 2:20 in 200BK. Now I understand what IRON swim is. 😀 It is hard to find a high school girl in Hungary who cannot do it.