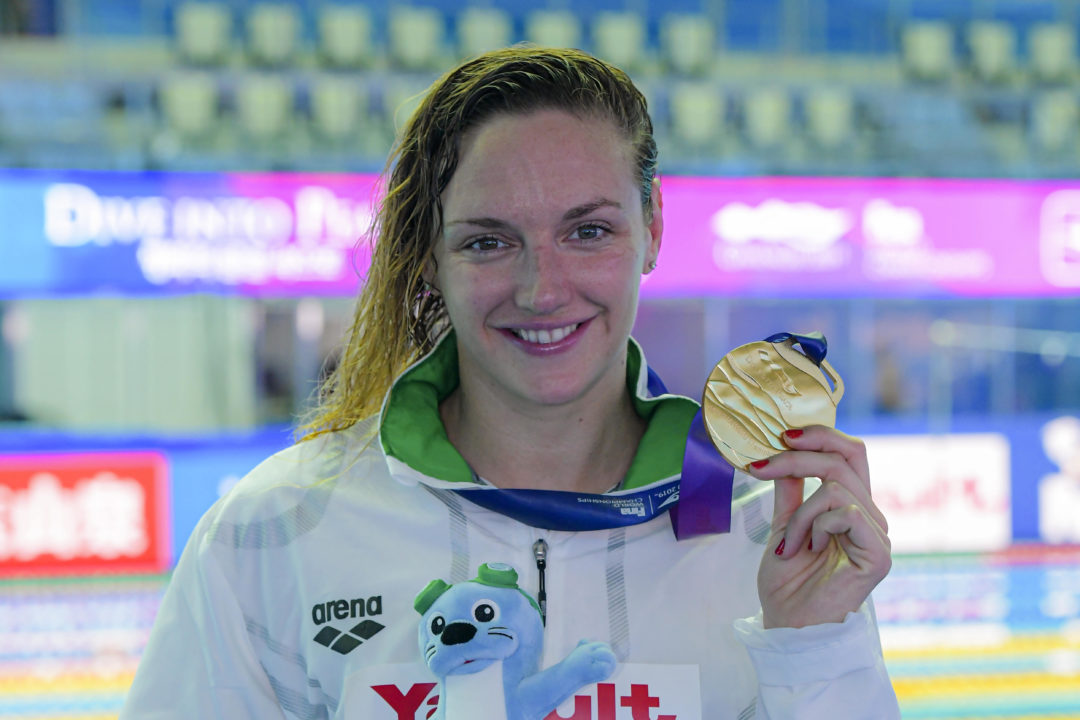 Hungary's Katinka Hosszu clocked a new World Cup Record this morning in Singapore in the 200m IM and sealed the deal with gold in the finals. Archive photo via Gian Mattia D'Alberto - LaPresse 2

The final day of action in Singapore brought the heat in the morning, with Hungary’s Iron Lady Katinka Hosszu wasting no time putting up a big-time swim.

Contesting the prelims of the women’s 200m IM, the Olympic gold medalist in the event ripped a top-seeded effort of 2:08.15 to clear her previous World Cup Record mark of 2:08.61 that’s been on the books since the Dubai stop in 2015.

Hosszu took the World Championships title this year in a mark of 2:07.53, but her outing this morning would have checked in with the silver in Gwangju. Although Hosszu was slightly slower this evening, hitting the wall in a mark of 2:08.63, the 30-year-old topped the podium by 5 solid seconds.

Moving on to the finals, Lithuanian Danas Rapsys raced the 200m free of his life, stopping the clock at a menacing time of 1:44.38. Splitting 50.99/53.39, Rapsys dipped under the 1:45 threshold for the first time of his career, becoming the 6th fastest performer ever in the event. You can read more about Rapsys’ historic performance, the fastest time in the world over the past 6 years, here.

Michelle Coleman got it done in the women’s 100m freestyle tonight, putting up the 6th best time of her career. The Swede collected a winning result of 53.63 to represent the only swimmer under not only 54, but 55, tying her fastest time of 2019 from Stockholm in April.

American Erica Sullivan snagged the 800m freestyle victory this evening, rocking a winning mark of 8:26.60. That time checks-in as the 3rd best of her career, but the 18-year-old has been on a tear in this event over the 3 stops of the World Cup. The Sandpiper swimmer logged a PB of 8:26.13 at the previous stop in Jinan, so she was less than half a second away with another convincing swim tonight at the OCBC Aquatic Centre.

The women’s 100m fly saw Chinese athlete Zhang Yufei get under the 58-second barrier, stopping the clock in 57.94 for the win. Splitting 27.00/30.94, Zhang hit a time within a second of the 57.13 she produced at Worlds that rendered her 13th after the semi-finals.

Hungary’s Zsuzsanna Jakabos flew to a time of 58.43, just .09 outside her own personal best, for silver, while Danish Olympian Jeanette Ottesen rounded out the top 3 with a 1fly time of 58.49. That effort was her 2nd fastest of the World Cup Series thus far, sitting only behind the 58.34 she logged in Jinan.

America’s Michael Andrew took home a gold from Singapore, reaping the top prize in the men’s 50m fly. He finished with a time of 23.07, not terribly off his own lifetime best of 22.80 logged at the 2018 U.S. Nationals. Hungary’s Sebastian Sabo earned runner-up status in 23.14 tonight.

Another American in Andrew Wilson nailed a winning effort in the men’s 200m breast, producing a time of 2:09.11 for the win. Representing the only swimmer under 2:10 in the race, Wilson got the job done, although he was more electric in Tokyo, where he notched a lifetime best of 2:07.77.

Lithuanian Andrius Sidlauskas nailed silver in 2:11.04 behind Wilson in this 2breast, while another American, Jonathan Tybur, wrangled up 3rd.

For Tybur, the former Texas A&M Aggie holds a personal best of 2:11.55 from last year’s U.S. Nationals and was hoping to get onto the U.S. National Team with a sub-2:10. He wasn’t able to get to that range, however, hitting the wall in 2:12.36, a time just.11 over his World University Games finals performance.

Is this the same Michael Andrew that sued Fina a year ago?🤔

You gonna pay me one way or the other.

Did anyone else notice in the 200 Breaststroke, Felipe Franca Silva came up at least 3m passed the 15m marker and wasn’t disqualified. Did anyone else see?

That’s because there’s no 15 meter violation in breaststroke.

Michael Andrew did the 22.80 at World Championships not at US Nationals. It was a personal best.

FINA needs to get rid of 50 strokes during the olympic year! Or at least don’t use them for any overall prize money.

The essence of the sport of swimming is “hey, I’ll race you to the other side!”. As kids, this is how kids enter the sport naturally. There’s nothing more pure in swimming than racing from one side of the pool to the other. I’m not sure why you think 50’s should be eliminated. Nobody says, let’s get rid of the 100M Dash in track and field. . . . . Please explain why you think 50s of the stroke should be eliminated….

The 50 free wasn’t an Olympic event for a long, long time.

The 50m events are more about power and explosiveness than swimming prowess. I can give you plenty of examples where a swimmer has a high world ranking in a 50m event but is nowhere when it comes to 100m. The 50m form stroke events are not on the Olympic program for a good reason.

So you’re saying the 50 free should be eliminated in the Olympics then?

And 100’s are more about power and explosiveness than the mile. Your point?

Distance events are more about VO2Max and less about swimming prowess…..LOL